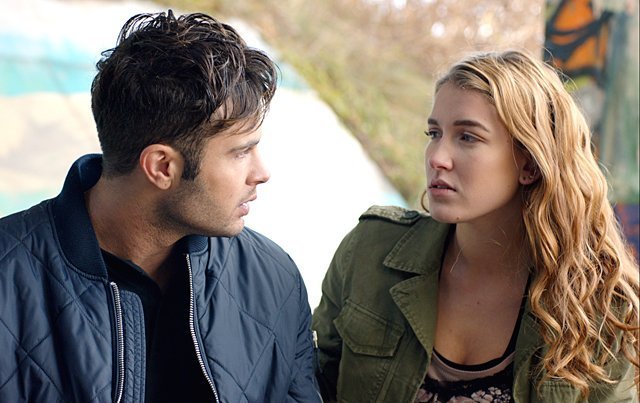 Cody Longo and Natalia Ramos star in a scene from the movie "Wildflower," a new film written, directed and produced by local Catholic Nicholas DiBella. It was also filmed in the Rochester area.

"It’s tricky if you don’t know if your own story has a reliable author."

Those are some of the first words spoken on screen by Chloe, the troubled main character in "Wildflower," a new film written, directed and produced by local Catholic Nicholas DiBella and filmed in the Rochester area. When the audience first meets Chloe, a 20-year-old college student played by Nathalia Ramos, she is distressed by recurring nightmares. She soon suspects her terrifying dreams actually may be repressed memories and begins to wonder if she may somehow be connected to a local girl’s disappearance.

Chloe soon is befriended by Josh, a young man and former missionary who is grieving the death of his girlfriend and questioning his faith. Together Chloe and Josh, played by Cody Longo, seek to solve a mystery and bring a killer to justice. Along the way Chloe also confronts the traumatic sexual abuse she endured as a child, and both she and Josh start to travel down the path toward healing.

"I call this an inspirational thriller, because on the surface it’s about this girl who has a recurring nightmare and thinks, ‘Man, I’m connected to this (disappearance) somehow," DiBella told the Catholic Courier. "At it’s core it’s an inspirational film about dealing with your past trauma."

DiBella said he can’t seem to stop himself from adding an inspirational element to all of his films, regardless of their genre.

"Even if they feel like they’re dark thrillers, … they all have at their cores some sort of inspirational element. I just love that idea of redemption, of hope, that your past doesn’t define you. Even if it’s just a straight-out thriller, someone will be healed through the process," the filmmaker explained.

DiBella, a graduate of the now-closed Cardinal Mooney High School in Greece, thinks his Catholic upbringing may partially explain why all of his films contain inspirational elements and focus on right vs. wrong and good vs. evil. His most recent film, "King’s Faith," was released in 2013 and was an overtly faith-based film, complete with an accompanying Bible study on the film’s website. That film was a success, and digital and DVD copies of the film continue to sell well, DiBella said. Nonetheless, he decided to take a slightly different approach to "Wildflower," which is not as obviously faith-based as "King’s Faith."

"I really wanted to keep challenging the market. … It’s all about trying to reach an audience that wants to be served that might not really go to a faith film," explained DiBella, who attends St. Paul and Holy Trinity parishes in Webster.

DiBella also is employing a different marketing and distribution strategy this time around. "King’s Faith" was released in theaters in 36 cities, including Rochester, and did well, but it reached a much larger audience when it was released on a digital platform. With that experience fresh in his mind, DiBella chose to mostly forego a theatrical release for "Wildflower." Beginning April 5, the film will be available for purchase digitally and on DVD from such retailers as Walmart, Amazon and Alpha and Omega, as well as at the film’s website, www.wildflowerthemovie.com. It also will air on the Lifetime Movie Network in early June.

Although he decided against a widespread theatrical release, DiBella opted for a limited engagement at Pittsford Cinema 9 last February because of the film’s local appeal. Much of the film was shot on the banks of the Erie Canal, especially near bridges in Spencerport and Brockport. Scenes also were shot in several indoor and outdoor locations on Brockport’s Main Street, as well as on the SUNY Brockport campus, and other scenes were filmed in Unity Hospital in Greece, Park Side Diner in Irondequoit and the First Baptist Church in Fairport.

None of the filming took place at Rochester’s Bivona Child Advocacy Center, yet the center did play an off-screen part in the movie, DiBella said. The topic of child sexual abuse captured his attention several years ago while he was working on a public service announcement for Bivona, and he decided to work that theme into the film. DiBella hopes "Wildflower" will help start a conversation about the prevalence of child sexual abuse. A discussion guide focusing on these themes is available on the film’s website.

Victims often keep such abuse a secret, but DiBella hopes the character of Chloe will show viewers that a secret only has power over them while it’s still a secret. Victims can start to heal once they share their secrets, as Chloe learns in the film’s final moments.

"I’m not there yet and I don’t know how long it’s going to take me, but I’m not going to let this own me or define me," she said.