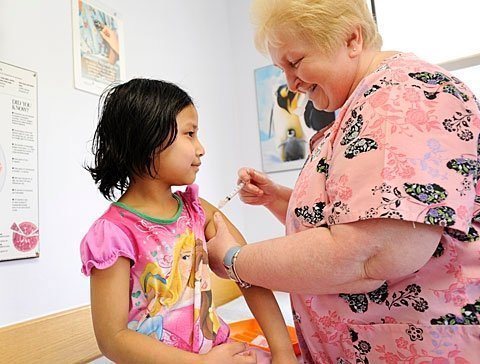 Six-year-old Payel Magar, a refugee from Bhutan, receives a vaccination from nurse Mary Nietzel during an April 21 visit to the offices of the Rochester General Medical Group.

ROCHESTER — Facing the daunting task of caring for refugees hailing from several continents and speaking 65 languages, Rochester General Hospital has taken the lead in offering advice on how to handle this diverse population.

Earlier this year, the hospital opened a clinic at Alexander Park exclusively for the pediatric care of refugee families. The hospital’s health providers also care for refugees at three other sites: Clinton Family Health Center, Genesee Internal Medicine and the hospital’s outpatient department, explained James Sutton, a bilingual physician’s assistant with RGH since 1997.

The hospital seeks to provide professional translation services — through translators from Catholic Family Center, a video service, and a remote simultaneous translation through headphones worn by the doctor and patient akin to the United Nations model — as a means to provide the best care possible for these new populations to the Rochester area, explained Sutton, also director of community medicine for RGH.

"When you meet a family for the first time, you have to gain their trust," added Stephanie Brown, a pediatric nurse practitioner who works two days a week at the Alexander Park clinic. "Having refugees speak about different things (in their own language) helps them. … Hearing about what happened before they came here is helpful too."

To help providers such as Brown learn how to be more culturally sensitive and better meet the physical and psychological needs of refugees from all over the world, Sutton headed up the planning for the first National Refugee Health Care Conference. The conference attracted more than 400 participants from 29 states during the two-day event in April, he said.

Workshops focused on a wide variety of topics, including historical perspective and cultural orientation of certain refugee groups, support for the well-being of pediatric children, health disparities in refugee populations and teaching cultural competence to reduce health disparities. The mental well-being of refugees also was addressed in a workshop exploring the trauma and healing among them.

"This is not just about having the assistance of people who are fluent in the diverse and sometimes arcane languages of our refugee clients, but also about understanding the cultural nuances that go into providing care in a way that’s appropriate to the client or patient," Jim Morris, CFC’s associate director of refugee services, noted in an e-mail. "And then on top of that is the level of providing care in a way that takes into account where the refugee has come from in the sense of what have they experienced as a refugee such as trauma, torture, rape. Have they been separated from their immediate family members? Have they grown up in a refugee camp? … It’s a lot to take into consideration. That’s why conferences and gatherings like (the) refugee health conference are so important since they promote better understandings in all these areas and allow a forum of providers and stakeholders to come together and discuss new approaches to face these challenges."

Marius Kother, now a University of Rochester doctoral student, faced some of that trauma when as an 8-year-old she came down with yellow fever while living in a refugee camp in Bene, where her family had moved after leaving her native Togo. Her mother carried Kother on her back while also carrying a younger son to a U.N. health clinic. But Kother was denied care over and over because the family had previously accepted a resettlement plan, which offered them a financial payment but did not include health care. She recounted her story during one of the workshops on April 12.

"I’m very scared of health-care professionals," she said. "When I needed them most, they turned me away. I still have a lot of anxiety."

She and fellow presenter Bethany Shwa of Burma said that their communities need volunteers to help refugee families who are left on their own only months after resettlement to help them get to health appointments as well as teach them how to get around the Rochester area.

Following the conference, Sutton took a poll and all of the respondents said they would return for another conference and would recommend it to another person, he noted. Requests also have been made to hold the next conference in Syracuse, Sutton added. One health provider from Arizona told him she had been looking for information like this for years, he said.

He expects that the conference will become an annual event over the next few years as health providers become acclimated to caring for refugees, Sutton said.

"There’s obviously pent-up demand for this (type of conference) across the country," he noted.

For decades, about 800 refugees a year have been resettled in Rochester, Sutton added. Last year, that number totaled nearly 700, and the majority of refugees came from Bhutan, Burma, Cuba, Iraq and Somalia. Currently, about 10,000 refugees from African countries, Afghanistan and Nepal have made Rochester their home.

One recent refugee is Aung Naing Htoo, who arrived in Rochester from Thailand three months ago through the International Organization for Migration, an intergovernmental organization dedicated to providing humanitarian assistance to migrants in need.

On April 19, he brought his 2-year-old son, Basee Roler, for a follow-up visit to the pediatric refugee clinic at Alexander Park in the former Genesee Hospital in Rochester. After living for years in a refugee camp, Htoo said that he moved his family to Rochester, where his parents had already moved two years ago.

Although health care was provided at the refugee camp in which he had lived, the quality of care and facilities were nothing like in the United States, he added.

"Doctors (here) are very nice people," he said. "They treat us very good."

The needs of refugees are unique not only in terms of language and culture, but because they also face medical conditions that are unfamiliar to Western medicine, Sutton said.

Getting to the bottom of such conditions was illustrated through a case recounted by Dr. Francesca Gany, one of two keynote speakers during the national conference. Gany is a New York University School of Medicine faculty member and founder of the Center for Immigrant Health, a network of community members, social scientists, and health-care and public-health professionals.

In the 1980s, Gany worked with a group of Senegali men who had clustered in a particular neighborhood of New York City and worked many long hours as taxi drivers. One by one, the men fell ill with the same symptom of abdominal pain that radiated toward their backs and caused them to seek care at Bellevue Hospital’s emergency room.

"The doctors were puzzled," Gany said. "And you name it, the test was done."

It was only when they were referred to her clinic that Gany was able to see a pattern. And upon enlisting the help of an anthropologist, visiting the men’s worksite and talking to people in the community, the doctors were able to diagnose the men with a condition from Senegal known as tooy. It would afflict people who were uprooted and who led solitary lives without a family structure at home and who had little time to rest.

They gave the men Knox gelatin, similar to kell — a dried plant that is the cure in Senegal — and spoke with them about their concerns.

"We were able to pull the community together to help the people," Gany remarked. "One by one, my patients improved and were able to go back to work and feel better."

Refugees possess a resilience and grace to uproot themselves and take on the often arduous task of getting to the United States, Gany noted. But her case exemplified the importance of building relationships and truly getting to know the refugee population one cares for, she added.

"They arrive with such hope and faith," she said. "This is a paradigm of care for others to follow."