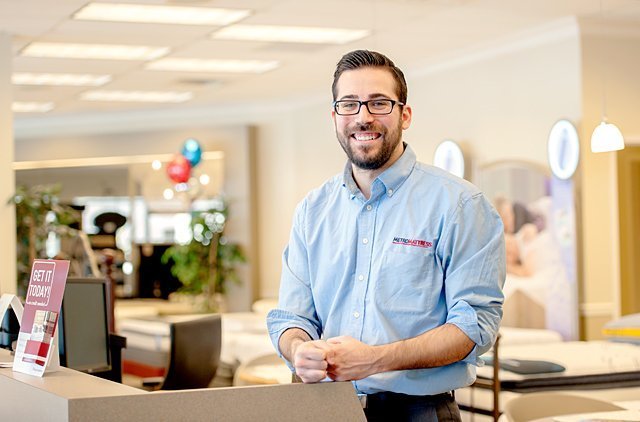 Juan Montes-DeOca, a sales manager at Metro Mattress in Greece, recently spent his company bonus and more of his own money to purchase bottled water for the residents of Flint, Mich.

Lead in the water: The crisis is not solely Flint’s

GREECE — The Gospel call to provide drink to the thirsty inspired Juan Montes-DeOca to spend a bonus from his job on bottled water for the people of Flint, Mich.

Montes-DeOca was moved by news stories about the residents of Flint, who went for months without safe water, he said during a Feb. 18 interview at the Metro Mattress store where he works.

The Flint water crisis began in 2014 when city officials approved a cost-savings measure of drawing water from the Flint River rather than Lake Huron, according to Michigan Public Radio stories on the blog Flint Water Study Updates. The change was meant to be temporary while the city awaited construction of a new water-treatment plant.

Although city officials originally said it was acceptable for Flint residents to drink the orange fluid that began flowing into their homes, a Flint resident asked Virginia Tech University to test the water last summer. Students and faculty there discovered that Flint tap water contained more than 133 times the maximum amount of lead allowed by the U.S. Environmental Protection Agency, according to an article on the university’s website, and testing continues on the safety of drinking the city’s tap water.

“You would never think this would happen in America,” Montes-DeOca remarked. “For people to go without water, for me that’s kind of crazy. … I pictured what if my nieces or nephews were without water, I’d hope somebody helped them.”

So, upon receiving a $750 work bonus in January, he kicked in an additional $250 of his own money and bought 250 cases of water for the people of Flint.

“I’m not rich,” he noted. “But I have a roof over my head, clothes to wear, food in my stomach. It’s just extra money. Why not try and help people with it?”

Montes-DeOca contacted Wegmans’ Mount Read store, where staff set aside the water and helped him load it into a rental truck to deliver to the Holy Angels Community Closet of Catholic Charities in Flint. He and a friend planned to drive the truck to Michigan and back, but when his friend could not go at the last minute, he made the trip himself in just one day.

After friends and family posted to his Facebook page the link to a local television news segment about his trip, Montes-DeOca said others reached out to him to help. Among them were Metro Mattress officials and the local trucking company Corrigan Moving System. He purchased more water using donations from people who had heard of his first endeavor, and another 650 cases of water were delivered in February to Catholic Charities in Flint.

One of those donations came from Darlene Havener of Arlington, Va., who read about Montes-DeOca in an online news roundup and is saving money throughout Lent to contribute to his cause.

“That he was a young man who got a bonus check, and instead of using it for himself decided to do something good, that was so impressive,” Havener remarked. “I’m sure there are more (people like him). Maybe I don’t make an effort to look, but I’m always really impressed when I see something like this. … He inspired me, and hope he inspires more people, especially younger people.”

Although Montes-DeOca said he appreciates such positive feedback, he noted that he is shy and has not relished being interviewed.

“I definitely don’t like to be in front of the camera,” he said. “I could never be a celebrity.”

Montes-DeOca is a humble person, noted David Shiroff, president and CEO of Syracuse-based Metro Mattress, who learned of his employee’s water donation after the first delivery.

Shiroff said he didn’t want to steal the spotlight from Montes-DeOca, but did want to contribute to the cause. So the company covered his travel expenses and matched his original $1,000 donation to support the Community Foundation of Greater Flint.

Shiroff said he was not surprised that Montes-DeOca undertook such a selfless project.

“The young man that I have had chance to get to know is a man of real high character. He is someone I believe is a righteous person,” he said. “I hope one day my 11-year-old son grows up to be just like Juan. He has his priorities in life sorted out in the right order. I’m proud of the guy.”

“I do like helping people,” Montes-DeOca said. “It fills me with joy. It makes me whole.”

As a child, he began helping others through such activities as collecting toys and clothes for underprivileged children every Christmas, he said. Montes-DeOca said he also understands hardship, having lost his father before entering high school and having had to leave college as a freshman to help his mother support and care for his younger siblings.

And someday, with God’s help, he said he hopes to fulfill his mother’s dream of starting a soup kitchen, which he plans to dedicate in her memory after losing her last year.

Such an attitude in a 20-something person is pretty rare, noted Shiroff, who said he will continue to financially support Montes-DeOca’s water mission.

“If he wants to make 10 trips there, I’ll pay for all 10,” he remarked. “This is how movements start — with grassroots activity; single individuals who have the courage to stand up, take a stand, try to make a difference. Other people tend to gravitate toward leaders like Juan. Who knows where he’ll take this.”