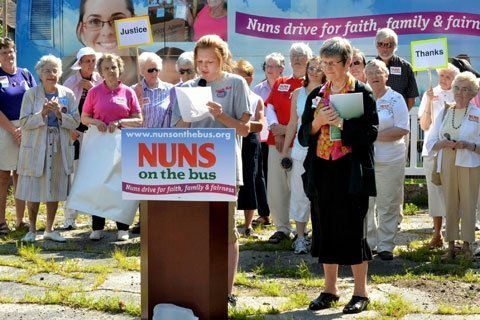 Sister Simone Campbell (right), executive director of the Catholic social-justice lobby group NETWORK, listens to a speaker June 19 during a stopby the “Nuns on the Bus” tour in Dubuque, Iowa.

Several locally based Sisters of St. Joseph, Sisters of Mercy and School Sisters of Notre Dame plan to hop on a bus as part of a national effort to raise awareness about the plight of the poor.

The "Nuns on the Bus: Nuns Drive for Faith, Family and Fairness" tour brings together Catholic women religious from across the United States to raise Americans’ consciousness about the federal budget proposal by Rep. Paul Ryan — now the Republican vice presidential candidate — and its ramifications on low-income families, according to Sister of St. Joseph Beth LaValley, who is helping coordinate the effort locally.

"My thing is government for the people, not the money," Sister LaValley added. "Also a goal is to encourage people to vote."

The national "Nuns on the Bus" tour kicked off in June in Des Moines, Iowa, and has continued throughout the summer with stops in Indiana, Michigan, Ohio, Pennsylvania and Washington, D.C. Stops have included rallies, meetings with legislators and meals with organizations, according to the group’s website, http://nunsonthebus.com/.

The Rochester tour will take place Oct. 16, with Sister LaValley and other women religious leading the effort riding in a 12-person van, she said, while other participants follow in cars as part of a caravan.

During the tour, the sisters also plan to distribute copies of the U.S. Constitution to boost familiarity with its principles, Sister LaValley explained. The local sisters were planning to obtain copies from local legislators with whom they were meeting prior to the tour date to talk about their goals, she said.

Among those goals are increasing citizens’ knowledge of the work of the "common good, sharing data on children in poverty, and educating, informing and inspiring the community," she added.

During the meetings with legislators, women religious also were planning to discuss the impact of the Ryan budget cuts on families, Sister LaValley added.

According to the Nuns on the Bus website, the budget written by Ryan would:

* raise taxes for about 18 million low-income families while cutting taxes for millionaires and large corporations;

* push the families of 2 million children into poverty.

In late August, Rochester-area women religious began planning to bring the bus tour to this area and realized how important it was to highlight the initiative organized by NETWORK, a national Catholic social-justice lobby, Sister LaValley noted.

"A lot of people I talked to didn’t know about this," she said, even though Sister Simone Campbell, NETWORK’s executive director, spoke at the Democratic National Convention. Sister Campbell also had offered to speak at the Republican National Convention but did not receive an invitation to do so, according to http://www.networklobby.org/news-media/press-release-sister-simone-campbell-speak-democratic-national-convention.

In addition to raising awareness about the tour’s goals, local sisters also want to highlight the "faithful budget" NETWORK has offered as an option, Sister LaValley explained.

Created through a collaboration of Christian, Jewish, Muslim and other faith communities and organizations, NETWORK’s budget proposal was designed to lift the burden on the poor.

"The ‘Ryan budget’ passed by the U.S. House of Representatives … cuts programs that benefit the vulnerable among us," Sister LaValley remarked.

EDITOR’S NOTE: For more information or to sign up to join the tour, e-mail Sister Beth LaValley at srbeth@ssjrochester.org.