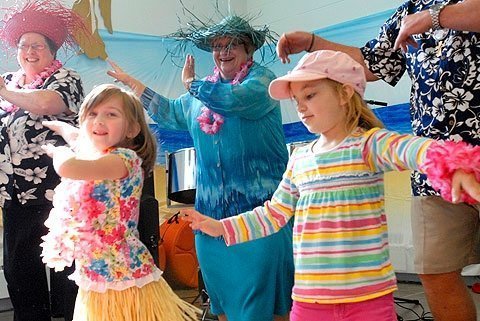 Barbara Swiecki (center), pastoral administrator for St. Marianne Cope Parish, joins other parishioners as they learn to hula dance during a luau in celebration of St. Marianne Cope's canonization Oct. 21.

When three parishes in Henrietta and Rush came together as one with the new name after then-Blessed Marianne Cope, they rejoiced at the news that Mother Cope would soon be canonized.

Not long after, parish staff began making plans to celebrate her canonization with a luau, since she served for many years in Hawaii. St. Marianne started hospitals in Utica and Syracuse before moving to Hawaii with some of the women religious from her local congregation to serve among those who were quarantined with Hansen’s disease, also known as leprosy.

Sunday at Guardian Angels Church in Henrietta, parishioners watched a recorded version of the canonization from earlier in the morning and partied to steel drum music while eating Hawaiian foods, wearing Hawaiian shirts and leis, and hula dancing.

Guardian Angels is one of three worship sites of Marianne Cope Parish, with the other two being Good Shepherd in Henrietta and St. Joseph in Rush. Each of the three worship sites will feature a banner with St. Marianne’s image and a second-class relic of her: dirt collected from her gravesite.

“It was good to see the three sites coming together as one,” said parishioner Lisa Mercadel of Henrietta.

Barb Swiecki, pastoral administrator for the parish, said parishioners and staff have been working to educate themselves about St. Marianne ever since it was announced that the parish would be named in her honor. For instance, the staff of the parish also went on retreat at the saint’s shrine in Syracuse.

“She gave up everything when she went to Hawaii,” said Sister of Mercy Cathy Solan, a pastoral associate at the parish. “It was a one-way ticket. She knew in her heart that she was not going to be able to come back again. She knew she was not going to see her sisters or her family again. It took a great deal of bravery and courage.”

Deacon Jim Carra, a permanent deacon with Marianne Cope Parish, noted that the proximity of St. Marianne’s shrine at the Sisters of St. Francis of the Neumann Communities in Syracuse makes it easier for the parish to forge a connection with her.

“I think it’s wonderful that we have someone so close to us that is a saint that we can physically go and touch,” he said.

Several parishioners from Marianne Cope Parish decided to travel to the canonization with the Irondequoit contingent.

“It was fantastic to see people from all over the world,” said Jim Karpick, a Marianne Cope parishioner.

He said there were large contingents of Filipinos and American Indians who attended the canonization ceremony.

In Irondequoit, students at St. Kateri School celebrated the new status of their patron — and the new name of their school — with an American Indian-influenced prayer service to the four directions: north, south, east and west. The event included biographical information about St. Kateri, who is the first American Indian saint.

She was born in 1656 to an Algonquin Christian mother and a Mohawk father, but as a girl she was orphaned, disfigured and partially blinded by an outbreak of smallpox in her village. After the epidemic, she went to live with her uncle. She was shunned by her community for choosing to be a chaste Christian and eventually fled to Canada, where she lived until her death in 1680 of tuberculosis.

"The thing that got me the most was that she left her own family to be closer to God and how every Sunday they wouldn’t let her eat because she would go to church,” said MaryEllen Brezing, 10, a fifth-grader at the school. She explained that the saint’s family cut off her access to food on Sundays because they were pressuring her to give up her faith.

“I think it’s a good example for our school, because no matter what, she always believed,” MaryEllen said.

“I loved that God called her like God calls each one of us, and that she had a strong feeling for her Christian life,” said 10-year-old Michael Lynch, a fifth-grader at the school.

Sister of St. Joseph Kay Lurz, St. Kateri School’s principal, noted that she recently found an overlooked statue at the school. At first she thought it was a statue of Mary, until she noticed that there were turtles on the bottom of the statue, which signified to her that it was a depiction of St. Kateri, who was a member of the Turtle clan. The school’s new logo includes turtles as well as lilies, which are a nod to St. Kateri’s nickname as the "Lily of the Mohawks."

Basilian Father Morgan Rice, speaking prior to the departure of the pilgrims to Rome, said about 24 pilgrims were going on the trip. The pilgrims attended a premiere of the documentary "St. Kateri Tekakwitha: In Her Footsteps" by Salt and Light Catholic Media Foundation.

They also took a bus tour of Rome and day trips to Florence and Assisi. Father Rice said the pilgrims hoped to bring back a memento of the canonization to present to the parish.

In addition to the Rome contingent, a group of Irondequoit pilgrims celebrated St. Kateri’s canonization at shrines in Auriesville and Fonda that are devoted to St. Kateri and the North American martyrs who ministered to the indigenous people of the area.

Plans are being made for pilgrims to share their experiences as part of the parish’s ongoing educational efforts about St. Kateri.

“We have tried to plan something almost every month for nine months to continue to learn about Kateri and celebrate her life and how relevant she is for today,” Father Rice said.

The parish also will host a weekend of Masses featuring members of the St. Regis Mohawk Tribe at 4 p.m. Nov. 10 at Christ the King; 8:30 a.m. Nov. 11 at St. Cecilia, 2732 Culver Road, Irondequoit; and 11 a.m. Nov. 11 at St. Margaret Mary, 401 Rogers Parkway, Irondequoit. The Nov. 10 Mass will be followed by a potluck dinner; no reservations are required. The Nov. 10 and 11 events will include songs and prayers in Mohawk, drumming and a purification ceremony called smudging. For details, call 585-544-8880.