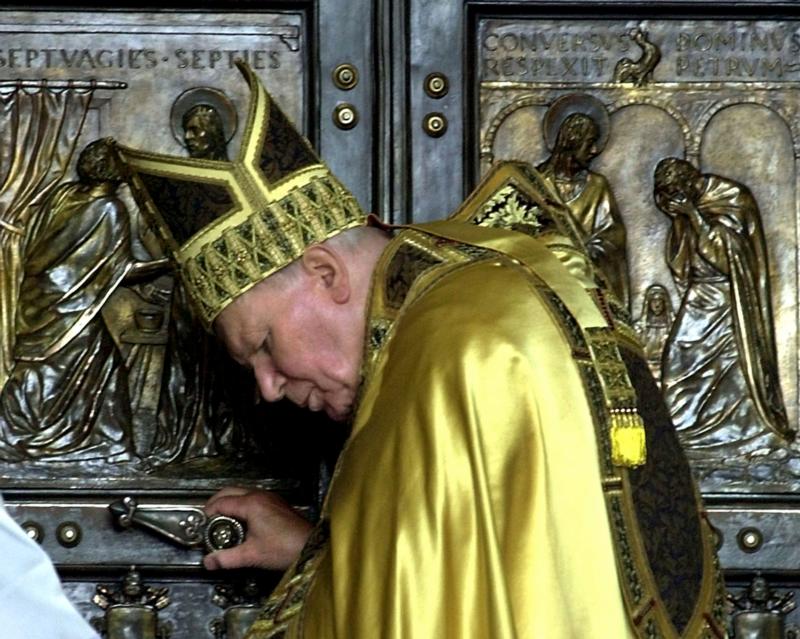 The Catholic Courier solicited reflections from religious leaders — Catholic and non-Catholic — from throughout the Diocese of Rochester. These are their responses:

“Pope John Paul was a beloved leader and truly a servant of God. I had the profound opportunity to be at Strawberry Island in Canada the week before he was to stay at the same “bunk-house” where we retreatants were staying, during World Youth Day 2002 in Toronto. I was thinking that he would be walking the same paths I had walked on the island, and praying before the same beautiful statue of the Blessed Mother. The following year I returned to the island for retreat, and went by the room that was remodeled for him. I stepped in just to feel his ‘presence.’ He truly was a blessed man. He touched many people in all denominations. I have a little booklet that was given to the youth that attended World Youth Day that year and have been reading his words to them. These words are especially poignant: ‘It is especially for you, young people, to take on the great tasks of building a society where there will be more justice and solidarity.’ (page 46 ‘My Dear Young Friends’ Pope John Paul II Speaks to Youth on Life, Love and Courage.)
— Marie Gibson, administrator of the Greater Rochester Community of Churches, and a member of Downtown United Presbyterian Church, Rochester

“Having studied for the priesthood in Rome during the pontificate of Pope John Paul II, I was fortunate enough not only to meet him, but to observe him at close quarters on several occasions. I was always profoundly moved by his vigorous presence and his deep and obvious spirituality. He had a charisma which animated everyone. His faith in God, his devotion to Mary and his love of people, especially the youth, never ceased to impress me. The Palm Sunday liturgy, which climaxed the Youth Jubilee of April 1984, at which the Holy Father presided, was unforgettable. Two hundred thousand young people were in St. Peter’s Square. There were rows upon rows of them holding huge palms which they waved in unison from side to side. The spectacle was of an ocean of green. The enthusiasm of the youth was electric, and the pope was enjoying every moment of it. Pope John Paul II was a great pope, one of the greatest of history. The church has lost a remarkable shepherd.”
— Father Alexander Bradshaw, pastor, Our Mother of Sorrows, Greece

“You were blessed with a great religious leader. … He not only served his community with great distinction but also worked hard for a better world for everyone. He was a man of peace and a great bridge builder. He brought the Catholic Community closer to the world and the world closer to his own community. Pope John Paul II did his best to promote understanding and respect between all world religions and faiths. ‘Nostra Aetate — A Declaration on the Relationship of the (Roman Catholic) Church to non-Christian religions’ was passed by the Second Vatican Council on Oct. 28, 1965, but it was Pope John Paul II who put it into effect. … It was under the directive of Pope John Paul II that the Catholic and the Muslim communities of Rochester signed a historic document of mutual cooperation and religious dialogue and understanding in May 2003 that continues to flourish today. … We share the grief and sorrow of our Catholic friends as this wonderful man continues his journey. “
— Muhammad Shafiq, Imam, Islamic Center of Rochester

“As mission director, I remember his deep love and compassion for the people of the world as witnessed by his many travels throughout the world. I had the privilege of being with him through Holy Week of 1991, during my Roman sabbatical, and concelebrating several special liturgies with him. I found him to be a man of deep prayer. One could feel the presence of the Lord by being close to him.”
— Father Robert C. Bradler, pastor, St. Thomas the Apostle, Irondequoit, and diocesan director of the Society for the Propagation of the Faith

“I have always been touched and inspired by his ability to stay the course in the face of great difficulty (and) opposition to his positions on church teachings, (his) untiring commitment to Jesus, his ability to forgive — as in the case of his would-be assassin, his determination to serve all people and to reach out to everyone in an ecumenical effort to build unity and oneness throughout the world. He will be sorely missed by the world as its champion of peace and justice. His death and dying will not be in vain.”
— Sister Barbara Baker, MHSH, pastoral associate, St. Charles Borromeo, Greece

“In 1997 I had the good fortune to travel to the Vatican to be a part of a Jewish/Catholic dialogue. During our visit in Rome, we had the good fortune to meet with many of the leaders of the church. We sat near Pope John Paul II and had an opportunity to observe his depth and deep commitment to this important dialogue. During the years of his leadership, so much good has occurred for a deeper understanding between Catholics and Jews. Our relationship has been enriched and reinvented by his powerful honesty and devotion. Through his courage and vision we have jointly moved into a new era of trust and relationship. I am deeply thankful for his life.”
— Rabbi Laurence A. Kotok, senior Rabbi, Temple B’rith Kodesh

“Having lived and studied in Europe for over five years I had the opportunity to meet and talk with the pope on three occasions, all of which were amazing. The last time I was there was the best when the pope was telling a joke. There were many things that made it funny and heart warming. I remember thinking, ‘how did I get from small-town Dansville, N.Y., to the private office of the pope sharing jokes?’ I will miss him greatly, and yet look forward to his successor continuing the great work of the papacy.”
— Father Patrick J. Van Durme, pastor, Our Lady of the Valley Roman Catholic Community, Steuben County

“Pope John Paul II will be especially remembered for his commitment to the dignity of the person and the respect for all human life. His encyclical on the “Gospel of Life” will be considered a milestone in papal teaching on the importance of the respect for all life from conception to natural death.”
— Father Kevin E. McKenna, pastor, St. Cecelia, Irondequoit

“In his book, Go In Peace: A Gift of Enduring Love, John Paul II wrote ‘Christ’s passion is oriented toward Resurrection. Human beings are thus associated with the mystery of the cross in order to share joyfully in the mystery of the resurrection.’ We don’t want to miss the significance of the timing in John Paul’s death — that he has passed through a time of great suffering, all the while believing in Resurrection. Even in death, he is teaching all of us that suffering has a value and that we are created for eternal life. Volumes will be spoken about John Paul’s contributions to the church and the world. We gather with the world community to remember and pray for our Holy Father, to recall his gifts and insights which point to the future of our church. However, at the same time, it is our responsibility to build the future church with courage and hope — a future of welcome, of justice, a future in which all voices will be heard.”
— Sister Janice Morgan, SSJ, congregational president, Sisters of St. Joseph of Rochester

“Pope John Paul II has been such a spiritual influence on young adults. He has certainly given them a point of connection with the worldwide church. I have appreciated the visibility he has given to the church as a result of his vast travels.”
— Sister Donna Fannon, MHSH, chaplain, Cornell Catholic Community

“I think what struck me most about the pope is the way he reached out to nations all over the world, visiting them and greeting their people personally. Also, I was always touched by the way he interacted with young people as we saw firsthand here in the U.S. and in Canada. His influence in destroying communism in Poland was an amazing feat. To me it is a powerful testament to his faith that he touched so many lives in so many ways.”
— Sister Pat Switzer, RSM, secretary of the Greater Rochester Community of Churches

“The first time I was in John Paul II’s presence, I sensed that here is a man who knows personally Jesus Christ. My first impression has deepened my own desire over the years to do likewise.”
— Father John Firpo, pastor, St. Helen, Gates

“There is no doubt, he is a great pope in history. I hope he will be recognized by the history as a John Paul the Great, as were some of the Fathers of the Eastern and Western Churches.

“He is a person who touches the hearts of millions of people, because of his capacity and gifts to appreciate what is essential in different cultures and traditions.

“Personally, I met the pope twice during my studies in Rome, and I have to recognize that those moments continue to have a vivid impact in my spiritual life.

“For all Ukrainian Catholics, his attention and compassion during the years of persecution of the Ukrainian Church, until 1989, are really appreciated, as well as many of the pontifical documents written with attention to the Eastern Churches, through which all Catholics were give the opportunity to know more about the spiritual richness of the Eastern Churches.”
— Father Vasyl Colopelnic, pastor, Ukrainian Catholic Church of Epiphany, Rochester