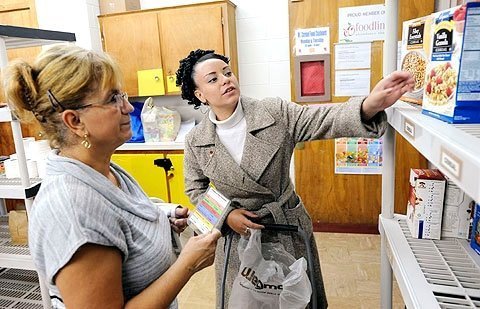 Natalie Garcia (right) chooses food at the Sister Regis Food Cupboard in Rochester Oct. 3. Nationwide, Hispanics are falling into poverty faster than any other racial group.

ROCHESTER — Bundled against a gusty, cool autumn wind, Natalie Garcia and her boyfriend, Geraldo de Jesus, make their way across the parking lot outside of the Sister Regis Food Cupboard, a cart full of groceries in tow.

Canned green beans, pasta, spaghetti sauce, bread, cereal, juice and baby formula for Garcia’s 6-week-old son, Joseph, are among the choices from the food center’s shelves. Garcia, 24, expects the food to last a week, perhaps a little longer if de Jesus, 30, gets a few days of work as a handyman.

Natives of Puerto Rico, both Garcia and de Jesus are recent arrivals to the Hispanic community encircling St. Francis Xavier Cabrini Parish in Rochester, N,Y. Garcia, 24, arrived from Chicago in November, looking for a new start in a smaller, less congested and less expensive city. De Jesus, 30, came to town with a friend in 2009 seeking work, hoping the economy was a bit better and jobs more plentiful. So far, he has found that jobs for someone who did not finish high school are few. In a typical month, he’ll earn about $500.

Garcia and de Jesus represent the growing number of Hispanics living in poverty. U.S. Census Bureau statistics for 2010 show that 26.6 percent of Hispanics — 13.2 million people — are poor. The figure represents a 1.3 percent increase from 2009.

Garcia, who also left high school before graduation, has learned to get by on public assistance and food stamps. Life, she admitted, is far different than when she earned $11 an hour as a nurse’s assistant in Chicago.

"This is my first time on public assistance," she told Catholic News Service Oct. 3 while waiting for her name to be called by volunteers at the food cupboard. "I have always provided for myself. I’ve always been very independent."

Garcia said she wants to get a GED and find work in health care again, but those prospects have been put on hold so she can care for her son. For now, Garcia and de Jesus are thankful for the efforts of people such as Mercy Sister Julia Norton, Sister Regis Food Cupboard director, to ease them through this tough time.

For Sister Julia, the couple’s story is typical. She has seen a growing number of young Puerto Ricans, Mexicans and blacks troubled by a lack of jobs.

"My numbers have almost tripled," she said of the 850 households who now visit the pantry every month compared with her first days on the job in 2008.

Never a prosperous neighborhood, Northeast Rochester is experiencing some of its greatest economic challenges since Sister Julia arrived 38 years ago to minister in the city’s Hispanic community.

Using state and federal data, Action for a Better Community, New York’s network of community action agencies, found that the Hispanic poverty rate in Rochester stood at 43.2 percent in 2010, the highest it has ever been.

"That’s the main thing that keeping the Hispanics so poor. It’s keeping the next generation poor," she said.

An analysis by the Pew Hispanic Center in Washington attributed the rapid rise in poverty among Hispanic children to the growing number of Hispanics overall, high birth rates and declining economic fortunes.

With the poverty comes a wide range of social ills: substance abuse, prostitution, unattended children at home and the rising incidence of diabetes and other serious illnesses that result because people do not have health insurance and do not address symptoms when they first arise.

Priscilla de Jesus, pastoral minister at St. Francis Xavier Cabrini Parish, said many more people have asked the church for assistance in the last three years since the recession hit. She has worked in the Hispanic community for 28 years since leaving Puerto Rico with her husband in 1983.

"(People) are not very comfortable. People call me. They say they need help to pay rent. Some time they say ‘I can’t find a job. Can you help me?’" she said.

"I would like to do more for them. I try to be with them at the time. I try to counsel them. Everything that I can do for them, I’ve been here for them. I’ve been very open for them," added de Jesus, who is not related to Geraldo de Jesus.

Father Laurence Tracy, 71, a retired priest with long-established ties to the parish, continues to minister on the streets of Northeast Rochester. He sees poverty becoming more deeply entrenched, reaching across generations. For today’s Puerto Ricans, many of whom are the descendants of those who came north beginning in 1946 in pursuit of jobs in clothing manufacturing and food processing, the prospects of well-paying employment are dim.

"Poverty has gotten systemic," Father Tracy told CNS during a break from his ministry on the streets."It’s no longer a temporary problem. It’s endemic to our economy."

So what gives people mired in poverty hope?

Pointing to the papal social encyclicals, Father Tracy said the church has long talked about the importance of people of faith helping each other and working to overcome social injustice.

"That comes naturally to poor people, especially Latino poor people, the cooperative effort to help one another in your family and your community," he said."There’s a lot of sharing that goes on. I think it’s in inverse proportion: the worse things get, the stronger this socialization."

Father Tracy knows that’s not an adequate solution, but for now, he said, that’s about the best people have.