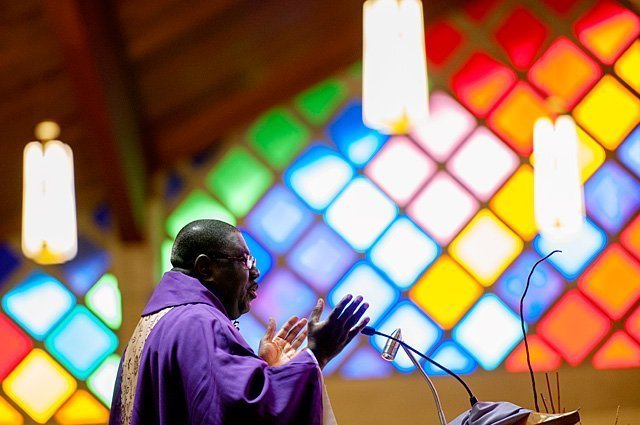 When Father Peter Enyan-Boadu arrived in the Rochester Diocese in 1992, he was among a scant number of African priests serving here.

African clergy had been arriving since the early 1970s, helping at parishes while attending college or taking sabbatical for a couple years before returning home. Yet Father Enyan-Boadu became a trailblazer by sticking around. Wishing to serve permanently in the United States, in 1996 he became the first African incardinated as a Rochester diocesan priest and, in 1999, the first named a pastor here.

Since then, the local landscape has changed considerably. Although African priests continue to stay for abbreviated periods, an increasing number are seeking — and receiving — incardination. Father Edward Palumbos, diocesan director of priest personnel, noted that among the 10 active priests from other countries who have been incardinated here, seven came from Africa.

In addition, a new wave of foreign-born priests is set to begin serving here on June 21, when Deacon Sergio Chávez becomes the first Colombian native to be ordained a priest of this diocese. Seven more of his countrymen are to be ordained here over the next four years, thanks to a special arrangement by which they will dedicate their entire priestly ministries to this diocese.

During an era of diocesan history when priestly vocations have not managed to keep pace with retirements — according to the Official Catholic Directory, the diocese has 85 active diocesan priests today compared to 208 during Father Enyan-Boadu’s first year here — the emergence of men from distant lands couldn’t have been better timed.

"If it weren’t for these very generous guys," Father Palumbos remarked, "we would be in deep trouble."

The decreasing number of active local priests also has been addressed over the past 20 years through the consolidation and closing of numerous parishes; introduction of the pastoral-administrator model, in which someone other than a priest leads a parish; and greater pastoral involvement of permanent deacons and laity. Nearly 40 percent of all diocesan churches are now led by someone other than a priest ordained for this diocese.

However, with 11 of Rochester’s 20 current seminarians hailing from diocesan parishes, hopes are increasing that local clergy can more clearly establish themselves as the primary source of vocations and pastoral leadership.

Father Enyan-Boadu noted that a turning point for the influx of African priests in this diocese began in 1999, when then-Bishop Matthew H. Clark reached agreements with African bishops to have clergy come here for specific ministerial roles. The overall number of priests arriving from such countries as Kenya, Ghana, Nigeria and Tanzania quickly doubled.

Father Enyan-Boadu feels this diocese has made strong efforts at addressing cultural differences. For instance, he has worked with fellow African priests on learning and better enunciating the English language. Parishes have subsequently become more accepting of the African clergy, he said.

"Now we are all over the place. And they love us," said Father Enyan-Boadu, currently the pastor at Greece’s St. John the Evangelist Parish. "That is how the times have changed."

The feeling is apparently mutual, with more African priests so enjoying their experiences here that they have sought incardination, pending approval of their home bishops. Their levels of responsibility have grown as well: Father Palumbos pointed out that several Africans are now pastors of parishes of significant sizes.

Father Enyan-Boadu contended that this trend isn’t depriving dioceses in Africa of their own priests, saying seminaries there are well-enrolled and that priests come to the U.S. with a mission spirit. "If there are not enough vocations (at home), the bishop won’t send anybody here," he said.

African priests — as well as smaller numbers from such countries as Poland, Sri Lanka and Mexico — have attended seminary and been ordained in their native countries before coming to Rochester. The arrangement with Colombia, on the other hand, is unique in that men from that vocations-rich country have committed not only to be seminarians here, but also spend their entire priesthoods in this diocese.

"These guys have left their families, to leave on a mission for the sake of the Gospel. I think that’s powerful," Father Palumbos said.

However, Dady emphasized that the link to Colombia — which took effect in 2009 — is a venture unique in diocesan history and unlikely to be repeated with that or any other country.

Also helping to compensate for insufficient numbers of diocesan priests has been the pastoral-administrator model that was implemented in 1994. As of May 1, 14 permanent deacons and laypeople were overseeing diocesan parishes; most are responsible for at least two churches. Although Father Palumbos said priest pastors have always been the ideal model for running parishes, "for nearly 20 years we have had very fine assistance of these competent leaders."

Another major plus has been local restoration of the permanent diaconate beginning in 1982. Deacons are empowered by church law to preside at marriages, baptisms and funerals, as well as give homilies. In addition to these ordained men, Father Palumbos said that "lay leadership is flourishing" in the operation of parishes.

Although Bishop Salvatore R. Matano "is still in the process of assessing the leadership needs of the diocese," Father Palumbos said the diocese still does not have enough priests. The overall effect of foreign clergy, pastoral administrators, deacons, laity and parish consolidations has "blunted the problem but it hasn’t offset it," he said, noting that the rate of annual priest retirements continues to outpace that of ordinations.

In addition, Father Palumbos said the ranks of clergy supplied by such religious orders as the Basilians, Jesuits, Carmelites, Franciscans and Redemptorists — long mainstays in parts of the diocese — have fallen by 90 percent from a peak level a few decades ago.

The good news is that locally generated vocations are rising. Although Dady can’t predict whether the upswing will continue, she said the mere fact that there are 20 diocesan seminarians — the highest level in many years — is an excellent selling point to other men in the diocese who might be considering a priestly vocation. And the addition of newly ordained Colombian priests perhaps will inspire more local Hispanics to consider the priesthood, she said.

These days, Dady remarked, "I think there is more talk about vocations, and priestly vocations in particular."

According to statistics (as of May 1) provided by diocesan officials and the Official Catholic Directory:

* The first incardination of an African priest into the Rochester Diocese was in 1996. There are now seven priests from Africa incardinated locally, and 16 clergy overall from that continent serving here.

* Local introduction of the pastoral-administrator model occurred in 1994. Curretly there are 14 pastoral administrators — people other than clergy — leading diocesan parishes.

* Among the 162 diocesan priests of the Rochester Diocese, 77 are retired, on sick leave or otherwise absent.

* There are 20 diocesan seminarians in formation, the highest level in many years. Three men were ordained priests last year, the most in one class since 1998. Two are set for ordination this June 21, with four more projected to be ordained in 2015.