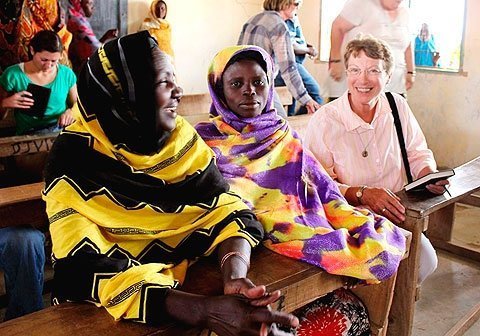 Sister Janet Korn (right) visits a school in the small village of Jajavo during a recent trip to Kenya that was sponsored by Catholic Relief Services.

An HIV infection had left the old Kenyan man so thin he had been given a prescription for food.

Yet even with the prescription, he was unable to find food due to drought and famine that have spread across his hometown and other parts of Kenya, Ethiopia and Somalia.

"He was thin as a rail and very weak," said Sister of Mercy Janet Korn, who met the man in a Kenyan hospital during a 10-day trip to the country in late August and early September to view the work of Catholic Relief Services (CRS). "He said, ‘I couldn’t get the food I needed.’ "

With the hot sun beating down, the man leaned on his daughter and walked to the small AIC Kijabe Hospital in Naivasha. At the hospital, staff members there decided to give the hungry man the only food they had: their own.

The CRS group was in Kenya in late August and early September to witness firsthand life-saving programs run by CRS, which is the humanitarian relief and development agency of the U.S. Catholic Church. Some of these programs may be eliminated or downsized if lawmakers adopt proposals to cut federal international assistance, including cuts to the President’s Emergency Plan for HIV/AIDS Relief, agricultural assistance to subsistence farmers, disaster assistance, peacekeeping, and support to migrants and refugees fleeing conflict and persecution. According to the Catholic Confront Global Poverty initiative, some members of Congress have proposed cutting up to 27 percent of the $20.25 billion international aid budget, which comprises 0.6 percent of the total federal budget.

The proposed cuts come at a time when CRS is ramping up its response in East Africa. As part of a five-year-long strategy to respond to the severe drought and famine that has affected more than 11 million people, CRS is providing emergency relief in the most affected communities and aid to Somali refugees in one of the Dadaab camps in Kenya, as well as continuing its long-term drought-mitigation projects. The agency also is working directly and with partners in Ethiopia and Somalia to respond to the disaster.

Sister Korn said that on the trip she was struck by how precious water was. One day, while driving through a dry area of Kenya, the group encouraged their driver to slow down so they could give some of their bottled water to a young herder.

"Our driver told us, ‘He’ll make that last for days,’" Sister Korn said. "It was half a bottle of water. Water is the most precious commodity."

The group spoke with the papal nuncio for Kenya, who told them he was very concerned that foreign government and agencies might not continue funding projects that had already begun, Sister Korn said.

The group saw how CRS staff members had trained farming communities to use every spare drop of water during dry times, build flood walls to capture seasonal rains, and use drought-resistant seeds in farming. One community also was constructing a pond that they planned to use to raise fish for the market. In other areas, group members were able to tour CRS well and sanitation projects.

"I found with all the projects we visited that the CRS staff really works from the ground up training people in the area," Sister Korn said.

Evidence of the toll the famine and drought are taking on the eastern portion of Kenya was visible in the carcasses of animals that had died along the roadside from starvation or dehydration. The group also saw many people driving thin animals to slaughter before all the meat on their bones was gone.

The group visited two host communities outside of the large refugee camps in Dadaab. CRS has provided support to these host communities, including building latrines and sanitation facilities for them. In one of those communities, the group members visited a primary school, where children danced and sang for them.

"The teacher invited the children to share their thoughts," Sister Korn said. "One boy said, ‘We really need a high school.’ Another boy said, ‘It would be wonderful if we could have solar lights so we could study at night.’"

In addition to Sister Korn, who has been active with diocesan global-solidarity efforts and who is urban-ministry coordinator with diocesan Parish Support Ministries, the group consisted of four CRS staff members and representatives from the dioceses of Sacramento, Calif.; Des Moines, Iowa; Tulsa, Okla.; and New Orleans, La.

Although the trip was focused on the humanitarian effort, the group attended Mass at several locations and visited the Nairobi National Park and a Giraffe Center, and they toured the site of the former United States embassy in Nairobi, which was bombed in 1998, killing 218 people. Costs for the Kenya trip were shared by participants and CRS.

Now back in the diocese, Sister Korn will be working in the coming weeks with diocesan Catholic Relief Services coordinator Kathy Dubel on education and advocacy on behalf of Africa. In addition to meeting with lawmakers, Sister Korn plans to make presentations to parishes.