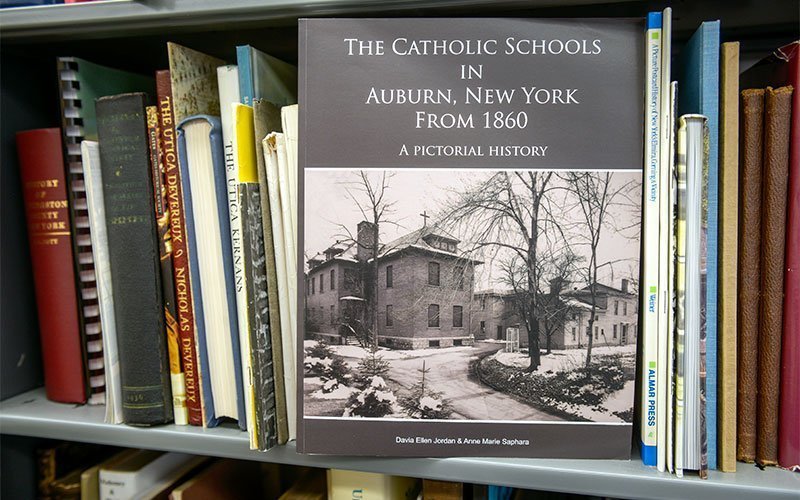 Sister Anne Marie Saphara, OSF, and her sister, Davia Ellen Jordan, recently published a book that illustrates the rich history of Catholic education in their hometown of Auburn. (Courier photo by John Haeger)

Although it’s a small city, Auburn has been home to more than half a dozen Catholic schools since the mid-1800s, and many Auburn residents enjoy reminiscing about their own memories from these schools, according to Sister Anne Marie Saphara, OSF.

“It just became part of our DNA,” Sister Saphara said of these Catholic-school memories.

Auburn natives Sister Saphara and her sister, Davia Ellen Jordan, recently published a book that illustrates the rich history of Catholic education in their hometown. The 92-page volume, titled The Catholic Schools in Auburn, New York From 1860, was released in 2018 and contains chapters dedicated to nine different Catholic schools, as well as the Auburn Orphan Asylum and Mercy Hospital.

The book is a “welcome read” for anyone who attended any of Auburn’s Catholic schools, according to Father Frank Lioi, pastor of St. Mary Parish and Ss. Mary and Martha Parish, both in Auburn. Father Lioi wrote the book’s foreword.

“It also is a wonderful chronicle of the contributions made by these Catholic schools to the fabric of the Auburn community,” he wrote.

Sister Saphara and Jordan both attended the former St. Mary School when they were children and frequently reminisce about their years at the parochial school. On more than one occasion they wondered aloud why no one had written a book about the Catholic schools that had educated so many Auburn youths.

“For institutions that influenced the lives of so many people, we were surprised that no one had previously written a book with photos chronicling all of Auburn’s parochial schools, so the two of us embarked on this project ourselves,” Jordan and Sister Saphara explained in their book’s introduction.

“People coming after us don’t really have that same experience that we had,” Sister Saphara, 68, told the Catholic Courier. “I wanted to kind of save it. Why have these pictures hidden away in folders when we can have a book made that people can open up and see?”

The sisters visited each of Auburn’s Catholic parishes, where they talked with parish staff and looked through old files. Armed with a laptop computer and a scanner, they made digital copies of the photographs they found and recorded the pertinent caption information that accompanied each photo.

“It took about a year. We had so much fun going to the different parishes,” Sister Saphara said.

She and Jordan also found a wealth of information in the archives maintained by the Diocese of Rochester and the Sisters of St. Joseph of Rochester.

“They had these neat old pictures. You’d see a Model T (Ford) in front of the churches,” Sister Saphara said.

Sister Saphara, a former graphic artist, did the page design for the book, which she and her sister self-published. They initially ordered 100 books, which they quickly sold. Another batch of 65 books also sold out quickly, and Sister Saphara said she is not opposed to ordering another batch of books if at least 25 people submit orders in advance.

Jordan and Sister Saphara also gave a talk about the book at Auburn’s Seymour Library on Feb. 27, and 25 people braved a snowstorm that evening to attend. Most of those in attendance were baby boomers, Sister Saphara said.

“There’s a nostalgia. They were all comparing stories of their days in Catholic schools with the nuns. Everybody remembers sister so-and-so,” she said.

In fact, it was the efforts of many women religious that made the Catholic schools of yesteryear successful, according to Father Lioi.

“This pictorial history of the Catholic schools in Auburn puts in concrete terms the wonderful teaching ministry of these dedicated religious women,” Father Lioi wrote in the book’s foreword.

The women religious not only taught in and administered the schools, but they also encouraged religious vocations among their students, Father Lioi said. Sixty students, for example, entered religious life after attending the former St. Mary School, which was staffed by 157 Sisters of St. Joseph throughout its years of operation, he said.

The efforts and sacrifices of the women religious who served in Catholic schools are not always recognized, Sister Saphara said. For this reason, she and Jordan decided to donate the proceeds from their first batch of books — which sold for $25 apiece — to the Sisters of St. Joseph of Rochester and recently mailed a check for $1,200 to the motherhouse. Books from the second batch were sold for $18 apiece, which just covered the books’ printing and shipping costs, Sister Saphara said.

EDITOR’S NOTE: Those interested in ordering The Catholic Schools in Auburn, New York from 1860 may email Davia Ellen Jordan at daviajordan9178@gmail.com.

Tags: Catholic Schools, Cayuga County News
Copyright © 2023 Rochester Catholic Press Association, Inc. All rights reserved. Linking is encouraged, but republishing or redistributing, including by framing or similar means, without the publisher's prior written permission is prohibited.