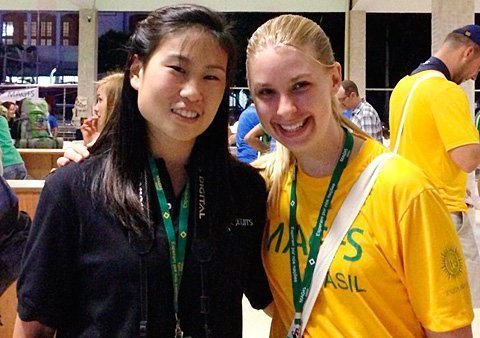 Lara Ericson (right), a Fairport native and the coordinator of Catholic programs in the campus ministry at Georgetown University, stands with Doris Yu, communications coordinator for Jesuit Conference USA, after arriving in Brazil July 12 for World Youth Day.

They had their immunizations and plane tickets.

But just before they were to leave for Brazil for a pre-World Youth Day gathering called Magis, several Rochester-area young adults had few details about what they would be doing during their multiweek journeys. Lara Ericson, 23, a Fairport native and the coordinator of Catholic programs in the campus ministry at Georgetown University, knew that she would be making a walking pilgrimage lasting five days and covering 70 miles. Christian Verghese of Pittsford, who will be a junior next fall at Georgetown, knew that this trip was one he had to take, no matter what the details. Ben Brasley, a Rochester native who will be a sophomore next fall at Canisius College, knew that for his placement, a spirit of sacrifice would be required.

"I like the idea of going somewhere that I don’t know where it’s going to be," Brasley said before leaving for the trip.

Magis 2013, which is run by the Jesuits, has drawn youths from throughout the world for an immersion experience of Ignatian programs and events leading up to World Youth Day. It is running from July 12-22, with locations across Brazil, beginning in Salvador da Bahia. According to the Magis website, the name comes from the Jesuit phrase "the more," in keeping with Jesuit founder St. Ignatius of Loyola’s urgings that those who follow Christ examine their ability to do more for him and for others. Magis started in 1997.

Pope John Paul II started World Youth Day in the 1980s as an opportunity for young people to gather, to celebrate and to learn about their faith. The 2013 World Youth Day will take place in Rio de Janeiro, Brazil, July 23-28.

Lara Ericson, the daughter of Rose and Paul Ericson and a 2007 graduate of Fairport High School, is one of two chaperones for a group of 12 college students from Georgetown University, where she graduated with a degree in theology in 2011. She said she had heard of people who have gone to Magis and World Youth Day in the past, and she couldn’t pass up the opportunity to go to Brazil to meet Pope Francis.

"We will be gathering in Salvador, Brazil, and our groups will go out from there," Lara Ericson said.

Rose Ericson said that this will be her daughter’s first time backpacking, but she noted that tired muscles are just part of the experience.

"With a pilgrimage, they are not supposed to be comfortable," Rose Ericson explained.

Yet Lara Ericson will carry with her the prayers of her home parish of St. Mary in Rochester, where she received a prayer shawl and blessings of parishioners July 7, said Rose Ericson, a cantor at the parish.

Ben Brasley also is taking with him the prayers and concern of his family; he is the son of Deacon John Brasley, the diocesan director of deacon personnel, and Belinda Brasley. Topping his agenda for Brazil is to catch a glimpse of Pope Francis, who will be at World Youth Day.

"It’s really a once-in-a-lifetime opportunity and I’m really thankful for it," said Brasley, a 2012 graduate of McQuaid Jesuit High School.

Though he did take the time to get yellow fever and typhoid immunizations, Brasley said he hadn’t learned any Portuguese prior to the trip.

"I like the idea of going outside my comfort zone and trying something new and doing something I’ve never done before," Brasley said. "This definitely falls under that category."

Angela Verghese said her son, Christian, a 2011 graduate of McQuaid Jesuit and a parishioner of St. Louis Paris, was determined to go to World Youth Day. She said he had recently e-mailed from Magis to say that he had been paired with a Marquette student who was going on a mission trip with him. Though she said she has been nervous on behalf of her son, she noted she has found comfort in Psalm 91 and the rare e-mail from him.

"He said the experience has been wonderful," his mother said. "It makes you feel like he’s having some profound experience."