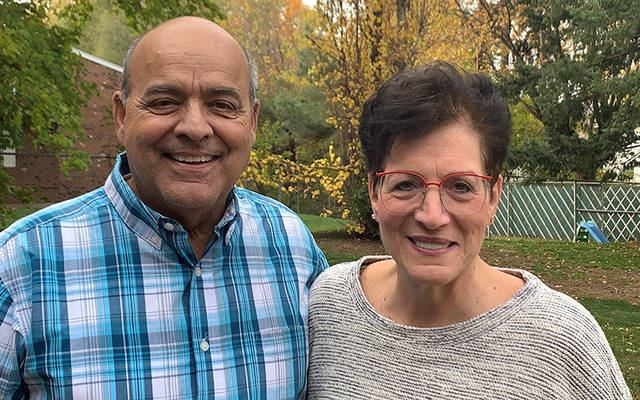 Former Catholic-school classmates Lou Berardi and Sylvia Bianchi Nicholson pose for a photo. When Nicholson learned in 2019 that Berardi needed a kidney transplant, she offered to be an organ donor. The two friends were slated to undergo transplant surgery Nov. 10. (Photo courtesy of Tara Masci)

Lou Berardi and Sylvia Nicholson’s paths crossed frequently when they were children growing up on Rochester’s west side in the 1960s. They had attended the same Catholic parish, where they were paired to make their first Communion together, and they graduated from the same Catholic middle and high schools.

They never guessed, however, that their futures would be intertwined as well. But on Nov. 10, they planned to add a kidney to the list of things they’ve shared.

Several years ago Berardi, who has had 10 stents placed over the years to open blocked arteries, learned that while these procedures had saved his life, they’d also adversely affected his kidneys. His body had not properly processed the dye used during these procedures, and instead the dye had stayed in his kidneys too long.

“The cardiologist says that ruined my kidneys. Both of them are shot,” Berardi told the Catholic Courier in early November.

Berardi needed a kidney transplant and was placed on the registry of those seeking donated organs. At the same time, his wife, Deb, and several family members were tested to see if their kidneys might be prospective matches for Berardi, but they all either were not adequate matches or were unable to complete the extensive screening process required of donors. Berardi had nearly resigned himself to living the rest of his life tethered to a dialysis machine when his daughter, Tara Masci, asked if she could make a last-ditch effort to find a kidney by sharing his story on Facebook.

It was a shot in the dark, but Berardi agreed, and his story was shared on social media on June 30, 2019. The post soon caught the attention of Nicholson, who happened to be scrolling through Facebook with her twin sister, Cindi Bianchi. They’d known Berardi since they were children, as all three had attended the former St. Francis of Assisi Church on Rochester’s Whitney Street. In 1966, they’d been in the same class of eighth-graders graduating from the former Holy Family School on Jay Street in Rochester, and they’d graduated together from Bishop Kearney High School in 1970.

The classmates lost touch after high school but reconnected in 2006 in the months leading up to the 40-year reunion of their eighth-grade class. After the reunion, the members of the planning committee continued to meet up regularly, Nicholson explained, noting that the last such gathering took place at the Berardis’ home last fall.

After learning of Berardi’s urgent need for a kidney and receiving confirmation from Strong Memorial Hospital that she was indeed a match, Nicholson began the extensive screening process.

“I had a CAT scan, X-rays, EKG, mammogram, colonoscopy, endoscopy, everything. You name it, I had it,” Nicholson said.

Once Nicholson had been cleared to donate her kidney, the transplant was scheduled for March 2020, but it was cancelled when the COVID-19 pandemic took hold in the region. The surgeries were rescheduled for June 2020 but had to be cancelled again when Berardi needed open-heart surgery in May.

Shortly after Berardi completed six months of rehabilitation, fluid began accumulating in his lungs and his doctors determined he could no longer receive his dialysis treatments at home and instead had to receive them in a hospital setting three times a week.

These treatments leave Berardi feeling drained, and the prospect of having to endure them three times a week for the rest of his life was depressing, he said. He was beyond thankful when Nicholson reassured him that she was still on board for the transplant surgery despite the delays.

Berardi says Nicholson is a saint. She takes a decidedly more understated approach to the situation.

“Louie calls me his angel. It drives me nuts. I just wanted to help,” Nicholson said simply.

Speaking to the Catholic Courier two days before the transplant surgery, Nicholson said she was eager to get the operation over with, but wasn’t scared because God gave her the courage to offer up her kidney and has been the force behind her throughout the process.

“You’ve got to have faith to help you through this,” said Nicholson, who attends St. Kateri Tekakwitha Parish in Irondequoit.

Berardi, who attends Our Mother of Sorrows Parish in Greece, and Nicholson both said they hope their story will inspire others to become organ donors.

“There are so many people looking for transplants, and some don’t get them,” Nicholson said. “I’m just hoping (our story) could help someone else understand it is something you can do to help someone in your family or a good friend.”