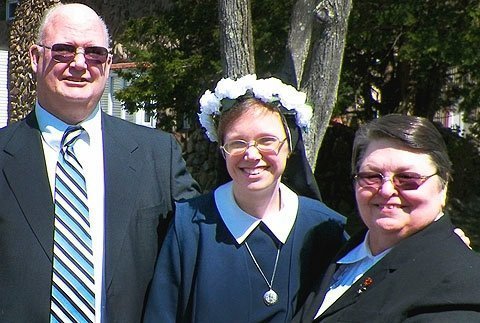 Sister Susan Marie Norton made her perpetual profession of vows as a Parish Visitor of Mary Immaculate during a Mass April 14. She is shown here with her parents John and Sharon Norton of Fairport.

On a Divine Mercy pilgrimage to Lithuania and Poland in 2001, John and Sharon Norton of Fairport began chatting with two women religious from the Parish Visitors of Mary Immaculate.

"We mentioned that we had a daughter who was married, but also a daughter who was looking into religious life," John Norton recalled. "Without skipping a beat, they asked, ‘Do you think it would be alright if we send her literature?’"

That conversation would wind up changing the life of their daughter, Susan.

Sister Susan Marie Norton, 38, made her perpetual profession of vows as a Parish Visitor of Mary Immaculate during a Mass April 14 at Marycrest Convent, the congregation’s motherhouse in Monroe, N.Y.

"The main thing that was going through my mind during my perpetual profession was that I was giving my whole life to God in a very special way and that I would be His forever," Sister Norton wrote in an e-mail from the Philippines, where she is serving for three months.

Sister Norton entered the religious community Sept. 15, 2002, from Holy Spirit Church in Webster, and made her first profession Aug. 15, 2005.

"The thing that attracted me to the Parish Visitors of Mary Immaculate was our apostolate," she wrote. "We, literally, go house-to-house knocking on doors to try to help non-practicing Catholics back to the Catholic Church through religious instruction. If we meet someone who was baptized in another Religion and is practicing their faith, we do not try to pull them away from their faith. If the person is another religion and is not practicing their faith, then we try to open the door to welcome them into the Catholic Church."

Sister Carole Marie Troskowski, general superior of the Parish Visitors of Mary Immaculate, said the congregation was founded to reach out to families and children to bring them more deeply into the Catholic faith. The sisters aimed to bring "that overflow of love with life in the Lord to those who are the most spiritually deprived," she said.

"She just has such a wonderful spirit of generosity, and she has a great devotion to Divine Mercy," Sister Troskowski said.

"Anytime we go down there (to see her), she is always smiling and is very happy," John Norton said.

Additionally, the congregation’s evangelization ministry is one to which the entire Norton family can relate. When Sister Norton was 16, her family converted to Catholicism.

They had become disenchanted with a church they were attending, and they decided one morning to attend a Catholic Church, as Sharon Norton had been raised Catholic. Daughter Judy Norton Garofalo had prayed for a sign that the family was in the right place, John Norton said. Moments later, an usher encouraged the family to bring up the gifts, even after the family mentioned that they weren’t Catholic, and Judy had the sign she sought.

The family had always been very faith filled, noted John. For instance, Sister Norton had health problems soon after birth that kept her from gaining the appropriate weight for her age. In faith, her family prayed to God that they would take care of the infant for a while, and then God could take her back if he needed her, John Norton said. Fortunately, the Lord had other plans.

"It took him a pretty good length of time, but he finally took us up on our offer," he said.

Growing up, Sister Norton loved to read Bible stories with her father, who for a time served as a Methodist minister. She would mention that she wanted to be like her father when she grew up, Sharon Norton said.

"I had a stirring in my heart that this was what Jesus wanted from me," Sister Norton said.

When she stood up and went forward, her family realized that she was being called.

"That was our indication that there was more going on than just turning Catholic," John Norton said.

After her three months in the Philippines, Sister Norton does not know where she will be assigned. Wherever she winds up will be right where she is supposed to be, her parents said.

"It’s the perfect fit, as far as we can tell," John Norton said of his daughter’s vocation.