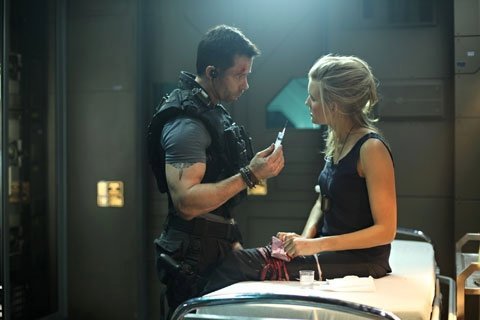 NEW YORK (CNS) — His story may be set in the late 21st century, but Snow (Guy Pearce), the tough-guy CIA agent at the center of the dreary action exercise “Lockout” (Open Road), displays some thoroughly retrograde attitudes.
¬†
Foremost among them, his view of women: As he’s quick to make clear, he likes his to shut up and look pretty.
¬†
On the receiving end of that oft-repeated message is no less a celebrity than Emilie Warnock (Maggie Grace), the daughter of the president of the United States (Peter Hudson). Poor Emilie could likely use some more constructive criticism than Snow’s insults about being a chatterbox, given that she’s managed to let herself be taken hostage by rioting prisoners during a goodwill tour of an orbiting penitentiary.
¬†
Don’t you just hate when that happens?
¬†
Snow, too, is in something of a pickle, having been framed, back on Earth, for the murder of a fellow operative. He’s agreed to sneak on board the experimental space slammer and rescue Emilie in exchange for a reprieve.
¬†
So the bad guys — led by two more-or-less psycho Scottish brothers with the thickest accents this side of your favorite Glaswegian pub — shoot at Snow and Emilie. And they shoot at the perps. And things blow up. And there’s a subplot about a briefcase full of something or other of the gravest importance to national security — we never do find out what. And, well, before it’s all over, the 21st century isn’t getting any younger.
¬†
Directors and co-writers (with Luc Besson) James Mather and Stephen St. Leger attempt to paper over logical lapses with macho posturing and wisecracks. But — like their airborne Alcatraz itself, long about the third reel — their project, never near the cinematic apex to begin with, begins to plummet rapidly and never regains flight.
¬†
The film contains constant action violence with occasional gore, a fleeting gruesome image, several instances of sexual humor, including a gag that’s also irreverent, about a half-dozen profanities, at least one use of rough language and numerous crude and crass terms. The Catholic News Service classification is A-III — adults. The Motion Picture Association of America rating is PG-13 — parents strongly cautioned. Some material may be inappropriate for children under 13.
¬†
– – –
¬†
Mulderig is on the staff of Catholic News Service.