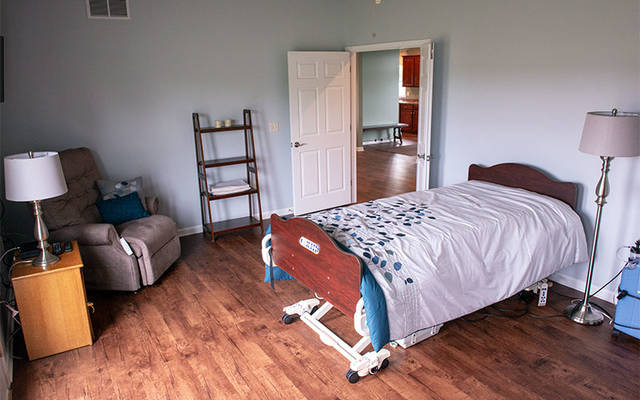 The newly built Patrick Place comfort-care home in Scottsville will provide hospice care for up to two individuals in the last stages of life. (Courier photo by Jeff Witherow)

SCOTTSVILLE — On the morning of May 15, Valerie Kessler performed the seemingly routine task of preparing a bedroom.

Yet this was no ordinary chore. The room would soon be occupied by the first patient of a new comfort-care home — one that was 10 years in the making.

Patrick Place is now available to people in the last stages of life, as well as their loved ones. The brand-new, two-bedroom structure is located at 2006 Scottsville-Chili Road (Route 386), just north of the Village of Scottsville. Its first resident arrived May 29.

“Every dollar donated, every hour donated, every craft and skill — it truly is the culmination of many, many people,” said Wendy Chapman, RN, Patrick Place’s executive director.

Through such efforts, a new option exists in southwest Monroe County for folks who have three months or less to live. Also offered in the 2,434-square-foot structure are a fully furnished living room and a kitchen, providing a home-like atmosphere for patients’ loved ones.

The idea for Patrick Place dates back to 2008 when St. Mary of the Assumption in Scottsville, St. Vincent de Paul in Churchville, St. Columba/St. Patrick in Caledonia and St. Christopher in North Chili together began pursuing establishment of a home for the dying.

Originally, Patrick Place was to be located in the rectory building at St. Mary of the Assumption. After a fundraising goal of $175,000 was reached in 2013, bids went out to contractors, but no satisfactory offers emerged. However, in 2014, Thomas Krenzer, a longtime parishioner of St. Mary of the Assumption, offered to donate the land on which Patrick Place now stands.

“God takes crooked lines and makes them straight,” Irene Goodwin remarked about this turning point in the establishment of Patrick Place. Goodwin served as pastoral administrator of St. Mary from 2002 until her retirement in 2014, as well as for St. Columba/St. Patrick and St. Vincent de Paul from 2011-14. (Those three churches became St. Martin de Porres Parish in 2017.)

In the fall of 2015, the building of Patrick Place finally began. Construction was completed in January 2017 at a cost of approximately $300,000, and Chapman — who has 20 years’ experience as a hospice caretaker and educator — started her position in June 2017.

The facility’s two bedrooms are dedicated to individuals who were integral to the formation of Patrick Place. The Thomas Room honors Krenzer, who died in December 2o15. Meanwhile, the Charlotte Room pays tribute to Charlotte Bruney, former pastoral administrator of St. Vincent de Paul, who died in January 2014.

Patients are drawn from the Caledonia/Churchville/Chili/Scottsville areas and referred by local hospice agencies. There is no formal charge for their stay, although families are asked to make free-will offerings if able. Patients are welcomed regardless of religious affiliation.

“The idea is, it’s not a Catholic outreach but a community outreach,” said Goodwin, who serves as a volunteer.

Chapman noted that there are currently close to 90 volunteers available, with Kessler serving as coordinator; many are trained to provide care and companionship for the patients and their loved ones. Others will perform such duties as office work, housekeeping, baking, property maintenance, correspondence, fundraising and public relations.

Chapman said that volunteers, along with donations of cash, services, equipment and supplies, not only have helped get Patrick Place up and running, but will sustain it going forward. The nonprofit operation was established with no government funding but is currently debt-free thanks to numerous fundraising events, grants and special collections. The only paid employees are Chapman, who is full time; nurses who split a full-time position; and a part-time administrative assistant. Home health aides for overnight care are provided by hospice agencies.

Goodwin, who has been an advocate for Patrick Place since the early stages, said she feels joy that it is finally a reality.

“It was a dream, and it’s a beautiful dream,” she commented.