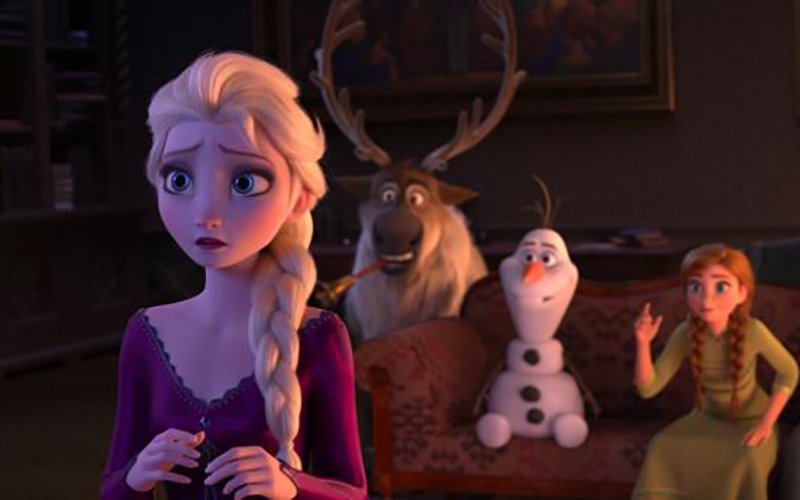 Elsa, voice of Idina Menzel, and other animated characters appear in the movie "Frozen II." (CNS photo by Disney)

NEW YORK (CNS) — Both the filmmakers and the central voice cast of the much-loved 2013 original are reunited in “Frozen II” (Disney). They deliver an exuberant animated musical adventure that’s suitable for a wide demographic.

While generally wholesome, however, this sequel is not appropriate for all. Too scary for the littlest patrons, the film’s nature mythos — which deals, among other things, with the “spirits” of the four elements, earth, air, fire and water — may also be confusing for impressionable moviegoers. Teens solidly instructed in the faith, by contrast, will easily let such ideas go.

Queen Elsa of Arendelle (voice of Idina Menzel), having succeeded her father on the throne and healed the breach with her younger sister, Princess Anna (voice of Kristen Bell), is reigning contentedly over her realm and has little use for the magical power to create ice and snow with which she’s endowed. But such placidity will never do, so a complication necessarily arises.

Elsa begins to hear a mysterious voice calling her into the wilderness beyond Arendelle and holding out to her the prospect of discovering the origins of her supernatural gift. Rather than consult a psychiatrist, she responds by embarking on a quest.

Along with Anna, Elsa is accompanied on her journey of discovery by Kristoff (voice of Jonathan Groff), the iceman who would like to make Anna his own, and by merry sentient snowman Olaf (voice of Josh Gad).

As the quartet, together with Kristoff’s faithful reindeer sidekick, Sven, become entangled in a long-standing conflict between the Inuit-like Northuldra tribe and some exiles from Arendelle, Kristoff’s repeated attempts to propose go disastrously — and amusingly — awry. Irrepressible Olaf provides further comic relief.

Screenwriter and co-director Jennifer Lee and her partner at the helm, Chris Buck, stress teamwork, family solidarity and upright values. But, along with the somewhat unscriptural outlook on the natural world Lee’s script establishes, at least some adult viewers may find its exaltation of the life of indigenous people over industrialized societies heavy-handed.

But why look beyond the obvious charm of “Frozen II” and the fun it evokes? Its flaws are ultimately outweighed by sympathetic characters, visual flair and skillful, if sometimes overly complicated, storytelling.

The film contains stylized combat and considerable peril. The Catholic News Service classification is A-II — adults and adolescents. The Motion Picture Association of America rating is PG — parental guidance suggested. Some material may not be suitable for children.