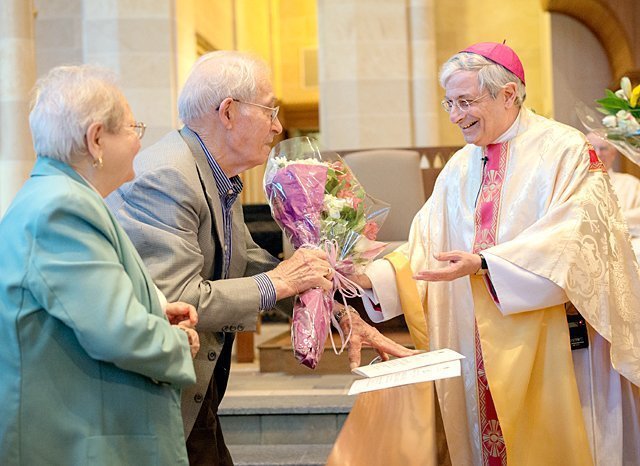 Bishop Salvatore R. Matano presents flowers to Giuseppe and Josephine Arena, the longest-married couple in attendance at the May 22 diocesan Wedding Jubilee Mass at Sacred Heart Cathedral. In October, the Arenas will celebrate 71 years of marriage.

The longest married couple who attended this year’s Wedding Jubilee Mass met at a wedding.

Giuseppe and Josephine Arena first became acquainted at his brother’s wedding in their native Sicily in January 1945, they said following the Mass celebrated May 22 by Bishop Salvatore R. Matano at Sacred Heart Cathedral.

"My mom had been invited (to the wedding) by another relative," said their daughter, Rosa Arena.

Less than a year later, "I married him," Josephine Arena said with a smile.

Josephine Arena said she has been blessed with a good husband and a long life.

"God gave me a long time for me and my husband," she said.

The secret to their long marriage is simple, both said.

"We love each other," Josephine said in Italian as her daughter translated. "We try to live in peace."

The real secret is always being open and honest with each other, he added.

"Honesty is everything," he said.

The couple, surrounded by several family members, said they enjoyed the jubilee celebration.

"I think it’s great what the diocese does for married couples," Rosa Arena said. "It gives people hope."

Bishop Matano presented the Arenas and Joe and Ellen Mercier, who will celebrate their 69th anniversary this month, with bouquets of flowers before the final blessing of the Mass.

The Merciers said they were pleasantly surprised by the gesture.

The two met at her mother’s boarding house in 1946. Joe Mercier had moved to Rochester from Lincoln, Neb., to work for Eastman Kodak Co. They met in September and were married the following June, Ellen Mercier said.

He also joked that one of the secrets to a successful, long marriage is just living long enough.

"And finding the right girl," Joe Mercier added. "She’s got to put up with me for a long time."

The couple has eight children, 15 grandchildren and 10 great-grandchidren.

"We’ve been blessed is all I can say," Ellen Mercier added.

Joe Mercier said he is troubled when he hears people say marriage is a "50-50 proposition."

Along with the Arenas and the Merciers, couples celebrating 25, 30, 40, 50, 60 and 65 years of marriage also were recognized with applause from the more than 150 people who attended the Mass.

All of the couples in attendance also renewed their vows during the Mass, which brought some of the spouses to tears.

During his homily, Bishop Matano said the Mass’ celebration of the Feast of the Holy Trinity was a perfect day to celebrate the anniversaries of the couples at the jubilee Mass.

"You mirror so beautifully the love of the most Holy Trinity," he said. "On this day, we honor and pray for you, who have made Jesus a true and intimate partner of your marriage. We pray that the Lord will continue to bless you and sustain you in this beautiful vocation."

The couples have exemplified a vocation lived in love, in fidelity and always in Christ, Bishop Matano added.

Bishop Matano ended his homily by echoing the words the couples heard from the celebrants on their own wedding days.

"May the Lord in his goodness strengthen your consent. May you grow in his blessings," he said. "What God has joined together let no one divide."