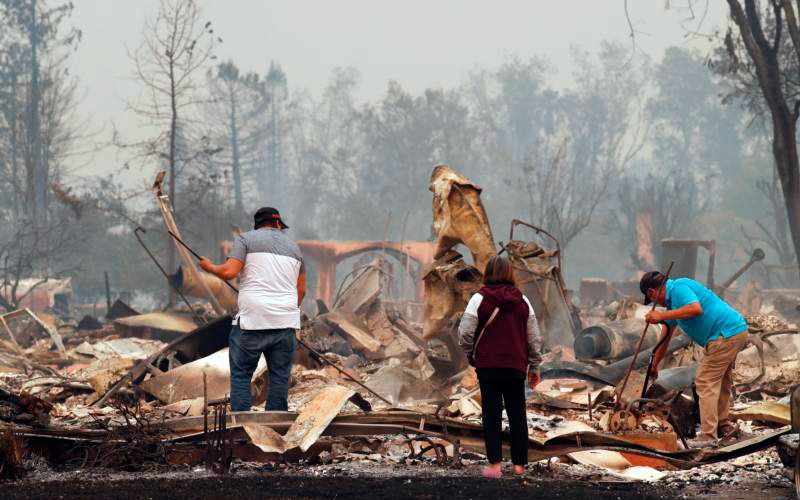 Residents look through the remains of their destroyed home Oct. 9 after wildfires in Santa Rosa, Calif. A series of deadly Northern California wildfires has killed at least 17 people, destroyed more than 2,000 buildings, including a section of Cardinal Newman High School in Santa Rosa. 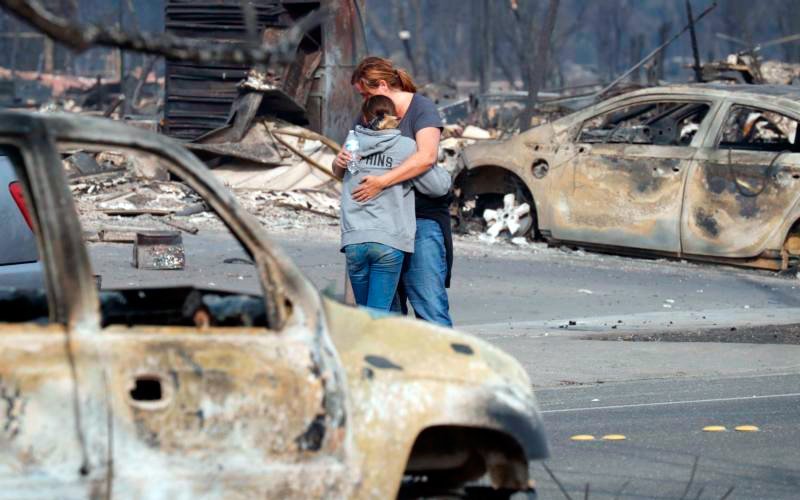 Residents embrace near the remains of destroyed homes Oct. 9 after wildfires in Santa Rosa, Calif. A series of deadly Northern California wildfires has killed at least 17 people, destroyed more than 2,000 buildings, including a section of Cardinal Newman High School in Santa Rosa.

SANTA ROSA, Calif. (CNS) — The Diocese of Santa Rosa “has been hit hard” and “is in an ongoing state of uncertainty” because of Northern California wildfires that began the night of Oct. 8, said Bishop Robert F. Vasa.

At least 12 major fires were raging across the region, according to news reports. Of those 12, at least five were zero to 5 percent contained, and the rest were 15 to 70 percent contained. Fanned by warm winds, they devastated a vast swath of North California’s wine country and forced 20,000 to evacuate. They left at least 17 people dead, and at least 180 others were missing.

“Santa Rosa is extremely smoky with the sun a mere red ball,” the bishop said in an Oct. 10 statement. He also noted that for the many hundreds who have lost their homes, “the sense of great helplessness is palpable.”

A CNN report noted how fast-moving the fires are, saying they “torched 20,000 acres in 12 hours.” Local civic authorities said factors that contributed to the rapid spread of the flames included dry conditions, high-speed winds and lots of vegetation.

Over 17 fires were burning across the state, including in Southern California; more than 115,000 acres had burned.

Bishop Vasa reported that most of the parishes in the Santa Rosa Diocese were fine but that a Catholic high school and elementary school that share a campus suffered serious damage. Early reports indicated that “a significant portion” of the high school had been destroyed.

After Cardinal Newman High School officials were able to assess the damage, they reported that the news was better than first thought and that most of the high school’s facilities, including the chapel and retreat center, were “unscathed.”

However, they verified that the library, the main office building and portable buildings that housed several classrooms were lost. Another classroom building suffered roof damage and some of its windows were blown out. Of the athletic facilities, the school’s baseball infield and dugouts were damaged.

The diocesan chancery also was “in the heart of a severely fire damaged part of the city but fortunately was entirely spared,” Bishop Vasa said in his statement, but it was being used as an evacuation center and would remain closed to diocesan staff “for the unforeseeable future.”

“So I am currently working from my car and trying to visit a few of the evacuation centers,” the bishop said.

“In the city, they estimate that 1,500 homes and businesses have been lost,” he continued. “I have met numerous folks who are in shelters and who have no home to which to return. The sense of great helplessness is palpable.

“That helplessness extends to the caregivers who know that short term solutions are necessary but also severely inadequate to meet the long-term needs.”

The six-county Diocese of Santa Rose includes four of the counties hit hard by the fires — Sonoma, Napa, Lake and Mendocino counties. Bishop Vasa called on all Catholics of the diocese to help their brothers and sisters who “have been severely impacted by the devastating fires and are in immediate need of your prayers. Please do not hesitate to offer your help though ongoing prayer, donations, and emotional support.”

“You may even be inspired to offer your home to a family who has lost everything. Simply imagine yourself and your family going through what many are experiencing now in reality, and act accordingly,” he advised.

Bishop Vasa said he would try to send occasional updates to the people of the diocese. “I appreciate the outpouring of concern and especially prayers. When people ask how they can help, I answer that I really do not know. I do know that prayers are the greatest source of solace and help.”

“My heart and prayers go out to all this displaced by the fire, especially those who have lost their homes,” he said. “I am extremely grateful to all the caregivers who have reached out so generously to your brothers and sisters in need.”

He added: “We all need to recognize that this is a long-term recovery and we are not yet done with the active fires. There is always need for ardent, consistent and devout prayers. I know that we can all count on you for this as well.”

In a letter to the Cardinal Newman High School community, church officials said that until further notice, all students, families and staff “are to stay away from the campus as it is in the evacuation zone and the site is not safe.”

School officials were working on a way to hold classes in another location, suggesting they might come up with a “hybrid” solution, offering some classes online. They invited families from the high school and St. Rose Elementary School to an evening meeting Oct. 12 on the “state of the schools” to share information and “how we plan to go forward.”

“We continue to pray for our families and our community who have suffered during this time, especially those who have lost their homes, business and have been displaced due to evacuation,” the letter said. “May God’s grace give you peace in this challenging time.”