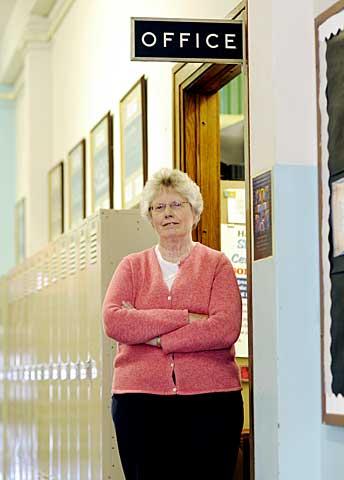 Elizabeth Berliner, principal of Holy Family Middle School in Elmira, retired at the end of the 2009-10 school year.

As she faced her first stint with junior-high students early in her teaching career, Elizabeth Berliner harbored one very strong sentiment: apprehension.

"The only thought in my mind was, ‘As soon as something opens on a lower (grade) level, I’m going,’" Berliner recalled, acknowledging that she had anticipated a nonstop struggle with disruptive young adolescents.

Then a funny thing happened. Berliner discovered that she loved working with that age group so much that she never left.

"From that point on, it just became that I found where I belonged," she said. "I thought they’d be difficult, but they weren’t. There was a certain maturity. I didn’t want to go anywhere. It’s really exciting — middle-level kids are so great, they’re so enthusiastic about things, they’re still kind of open to everything."

Berliner, 66, served for three decades overall as a Catholic-school teacher and principal in Chemung County. Her distinguished tenure concluded when she retired as Holy Family Middle School’s principal at the end of the 2009-10 school year.

A native of the Bronx, Berliner taught in New Jersey and Georgia before becoming a teacher at St. Mary Our Mother School in Horseheads in February 1980. She then taught at the former St. Patrick Junior High School from 1981-86, and from there she went to Holy Family Junior High as part of a consolidation process. Although her area of teaching expertise was in science, Berliner also taught religion, health, math and even physical education along the way.

In 1992 Berliner became principal of Holy Family Junior High, a position she would hold for the next 18 years. As she ends that lengthy tenure, Berliner feels confident about the future of Catholic education in Elmira where the Holy Family system underwent a consolidation from three buildings to two beginning in 2009-10. The junior high was renamed Holy Family Middle School, adding a sixth grade to its seventh and eighth grades.

"I think Elmira has a core community that’s really committed to providing Catholic education in the city," she said.

Berliner noted that she opted for retirement at this time since the transition to a middle school is complete, and also because there are "just a lot of things I want to do and I haven’t had time to do them."

Perhaps that’s because Berliner has thrown herself so hard into her job. She’s worked right alongside her student body for a number of service activities, such as year-round volunteerism at Elmira Community Kitchen and traveling with students annually to participate in the New York State Catholic Conference Public Policy Forum in Albany.

"I’ve really enjoyed it — to be there whenever they go anywhere, see what they see, experience what they experience," remarked Berliner, who was recognized on June 14 by Catholic Charities of Chemung/Schuyler as one of six Works of Love Award recipients for outstanding social-ministry service.

Within the school, Berliner has fostered an intense student focus on environmental issues as well as strong participation in Operation Rice Bowl each Lent. Berliner is especially pleased by the interest her Holy Family students have shown in their faith, as evidenced by monthly school Masses that have seen young people eager to serve in such liturgical roles as ushers and extraordinary ministers of holy Communion.

"I’m just really proud of them," she said.

Berliner is a longtime resident of Horseheads. She has four adult children who attended St. Mary Our Mother School and Notre Dame High School, and four grandchildren as well.