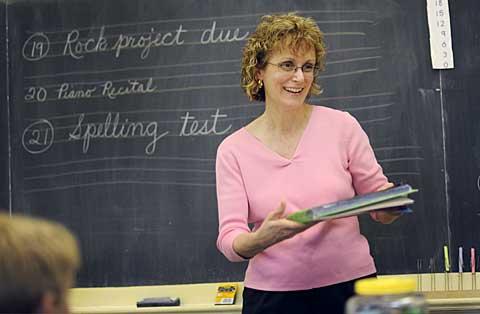 When Kevin Doran, an anchor for Rochester’s News 8 CBS affiliate, strode toward her on the playground at Geneva’s St. Francis-St. Stephen School April 15, second-grade teacher Sandy Schading had no idea he was there to present her with an award.

"I honestly thought for a minute he was a politician and that the school had been awarded a large sum of money," Schading later told the Catholic Courier. "I thought this was the golden moment. I kept looking for the big cardboard check like you see on TV."

It was a golden moment, but not in the way Schading expected. All of St. Francis-St. Stephen’s students and faculty watched as Doran told Schading she was the latest winner of the News 8 Golden Apple Award. Each week the station presents the award to a teacher who’s been nominated by students, parents or fellow faculty members, and April 15 was Schading’s day to shine.

Schading’s motto is "reach for the stars," and she and her students always do just that, Troy and Amy Quigley wrote in a letter nominating Schading for the award. The Quigleys were impressed with the positive attitude and loving support Schading showed to their son Ryan and daughter Madalyn, who are Schading’s former and current students, respectively.

"Not only is she a wonderful Christian example, she is a teacher who really believes in her students and never gives up on them," the Quigleys wrote. "There has never been a teacher more deserving. Mrs. Schading is a star!"

"She gets the very best from her students with kindness and gentle encouragement. She truly loves her students and they love her," Morrow said.

Schading became a teacher after she finished her own schooling, and taught at Border City School in Waterloo until she had two sons. She later became a substitute teacher for the Geneva City School District, but started to think she belonged in a Catholic school when she filled in for a teacher whose child was scheduled for a serious heart surgery.

"When I realized I couldn’t really ask the children to pray for a successful operation, I realized I belonged in a place where I could pray openly with my students," Schading said.

That point was driven home later, when Sister of St. Joseph Catherine Judge allowed Schading to send her oldest son to kindergarten at St. Stephen even though Schading couldn’t afford the tuition.

"She said I could work it off by subbing," she recalled. "I cried when she suggested that. I wanted my kids there so badly. That’s when I realized that I, too, belonged in the Catholic schools."

Schading has been teaching at Geneva’s Catholic schools ever since.

"I just knew that if I worked for God he would supply all my needs, and he has," she said.

She eventually became a full-time teacher and also worked at both St. Francis and later St. Francis-St. Stephen. She has taught preschool and kindergarten as well as first, second and third grades. She said she enjoys teaching the younger grades because the students’ honesty and innocence energizes her.

"They also seem to understand who God really is. That innocent faith continuously renews mine," she said.

Morrow said Schading herself possesses a strong faith that she constantly shares with her school community. Several years ago she started a prayer-coupon program and invited Geneva residents to send their prayer intentions to the school. Consequently, Morrow said, St. Francis-St. Stephen students currently pray for 120 intentions every day.

"She is everything you would think a Catholic school teacher would be, sharing her faith, her hope and her love with everyone she meets," Morrow said.

Schading said she tries to be a firm yet fair teacher and treats each child as if he or she were her own grandchild. In fact, many students feel like grandchildren to her because Schading taught their parents, she said.

The faith-filled environment inside Catholic schools, she said, prepare children to make life decisions and teach them to care about others and become active citizens, all with the greater purpose of serving God.

"Let’s face it. The world is a bit crazy now and young ones need an anchor," Schading said. "It’s hard to get through life without a strong center to our being. Catholic schools give children that center."