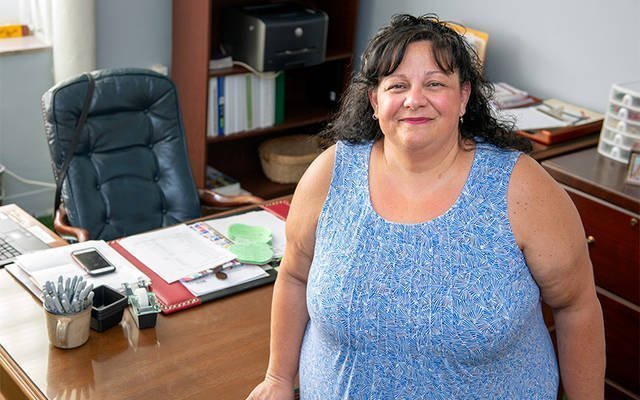 Mary Jo Keba has only been the principal at St. Joseph School since July 9, yet she’s a familiar face to virtually everyone in the school community.

“I’ve taught pretty much every child in this school,” remarked Keba, who has taught in Auburn’s Catholic schools since 1986.

Up until a few months ago, Keba had no inkling that she eventually would be taking the helm of St. Joseph School. The school previously had been led by Michael Carney, who left his role as principal there midway through the 2017-18 school year and was replaced on an interim basis by James Tauzel, coordinator of curriculum and instruction for the Diocese of Rochester’s Department of Catholic Schools. It was Tauzel who suggested Keba apply for the open principal position last spring, she remarked.

“He said that I would be a perfect fit for this ‚Ä¶ and I sent my application and my resume,” she said.

Tauzel hadn’t been at St. Joseph long when he realized the kindergarten teacher’s consistently positive attitude and passion for Catholic education made her a prime candidate for the principal position, Tauzel explained.

“Her classroom exemplified the values of our schools, creating a caring, faith-filled learning environment where every child is treated as a gift from God. I am positive she will bring these talents to a broader audience as a building leader,” Tauzel said.

Over the course of her 32 years in Auburn’s Catholic schools, Keba has built a reputation for being a down-to-earth and energetic leader who is committed to the Auburn Catholic community, he noted.

“She will continue her service to our school with a vision to continue Catholic education in the area for many years to come,” Tauzel added.

An Auburn native, Keba attended public schools as a child and went on to study at Cayuga Community College followed by SUNY Brockport, where she earned her teaching certificate. After returning to Auburn, the first job opening that was offered to her was that of a kindergarten teacher at St. Mary School.

“It just kind of worked out that way and I loved it, because I’m so happy being able to have God in every day of my life, every day with the children,” Keba recalled.

It wasn’t long before Keba knew she wanted to remain in Catholic schools for the rest of her career. That desire was solidified after she and her husband, Paul, had two children of their own. By that time Keba was teaching at St. Joseph, which had been formed through the 1996 merging of St. Mary School with Blessed Trinity School.

“Once I had my children and I knew I was going to have them come here, that was it for me. I was never going to leave,” Keba said.

Keba’s daughter, Faith, and son, John, both graduated from St. Joseph School, and in recent years Keba had been teaching the children of former students she’d taught decades earlier. Both of these factors only add to the strong feeling of family that permeates the school community, she observed.

“I’ve known most of these people all of their lives. It’s just like one big family, and as we grow and have new families come in, they become part of that. We’re a growing family,” she said.

Keba feels like she has a good rapport with the school’s faculty and staff, who she said are exceptionally cooperative and motivated, as well as St. Joseph’s school families. These families have been incredibly supportive in the months since she learned of her new position, she added.

“When the families found out that I was going to be the new principal it was an overwhelming influx of people just congratulating me,” Keba recalled. “It was heartwarming having that thrown at me from every direction, and it wasn’t just at school. It was even in the grocery store. It was overwhelming.”

This outpouring of support has boosted Keba’s confidence, and she’s looking forward to interacting with the various members of the school community in a new way when the new school year begins.

“I’m very excited for the first day of school, when all the children come,” she said. “I’m excited to welcome them all on the first day.”