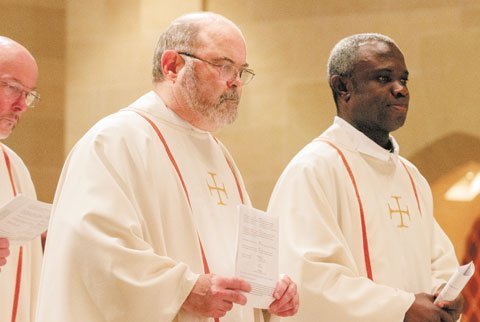 There’s a guy in Tioga County who’s well-known for washing dishes and taking the garbage out after church events.

Over in Schuyler County, another man has stepped up when things needed to be erected, taken down or cleaned — from beautifying the church at Easter to plowing the parking lot and shoveling sidewalks during storms.

These folks’ actions have been constants over a good many years, according to eyewitness accounts from two longtime parish secretaries — Lisa Salamida at Tioga’s Blessed Trinity/St. Patrick and Kathy Decker at Schuyler Catholic Community.

Who might the unsung heroes be, doing all this grunt work? Maintenance workers? Loyal parishioners?

Fathers William Moorby and Paul Bonacci have dedicated themselves to their parish communities in numerous ways, perhaps most notably through length of service — Father Moorby, 21 years in Tioga County; and Father Bonacci, 13 years in Schuyler. Both pastorates will end effective June 24.

Father Bonacci, meanwhile, is set to become parochial administrator of St. Pius Tenth Parish in Chili, a suburb of Rochester. Replacing him as Schuyler Catholic Community’s new pastor will be Father Steve Lape, currently a sacramental minister at three churches in Monroe and Livingston counties. Father Bonacci will be feted at coffee hours after Masses June 21-22 at Schuyler’s two churches, St. Mary of the Lake in Watkins Glen and St. Benedict in Odessa.

Father Moorby, who was ordained in 1982, began his stay in Tioga in 1993 as pastor of St. John the Evangelist, Newark Valley; and St. Francis of Assisi, Catatonk. Four years later he was named administrator of St. Patrick, Owego; and a year after that he became pastor of all three churches. In 2003 he doubled his pastorate by adding on St. James, Waverly; St. Margaret Mary, Apalachin; and St. Pius X, Van Etten in the newly formed Blessed Trinity/St. Patrick parishes.

Father Moorby has guided his parishioners not only through parish reconfiguration, but also the delicate process of closing the Catatonk and Van Etten churches in 2009. He commented that they stuck together admirably through these major transitions.

"The people have been supportive and fairly open. I think they were very cooperative," he said.

Praise for his flock also was voiced by Father Bonacci. When asked to describe his highlights in Schuyler County, he replied, "That’s a difficult question. It seems like everything has been a highlight within that community."

He added that the cluster, despite not being particularly large, is brimming with activities as well as spirituality: "They’ve helped me grow up as a human being, as a priest."

Father Bonacci came to Schuyler in 2001, 10 years after his priestly ordination, when he was appointed administrator of St. Mary of the Lake and St. Benedict. He became the cluster’s pastor in 2002.

Decker lauded the priest for his many caring ways: creating a healing ministry; assisting with charitable works; leading parish missions; traveling long distances to visit ill people; ministering to inmates and staff at the Monterey Shock Incarceration Correctional Facility; and holding Masses at local wineries for people in the tourism industry who can’t easily get to Sunday Mass. The jack-of-all-trades also has served as a teacher, disc jockey, deputy sheriff, high-school sports official, volunteer firefighter and school-board member.

Decker, who has been Schuyler’s parish secretary throughout Father Bonacci’s 13-year tenure, recalled her very first meeting with him: "He impressed me as being extremely kind, a very kind person with a big heart," she said, adding that this trait has held up over the years as well as his abilities to be humorous and down to earth.

"I’d say we were very, very blessed," she remarked.

Salamida also has felt blessed by her pastor and boss. She noted that Father Moorby’s caring ways were evident when he baptized her youngest child shortly after his 1993 arrival at St. John the Evangelist, where she attends.

"He personally came to my house and did the baptism prep class himself. I was like, ‘Wow,’" she said. "I was very impressed."

Salamida, who has been secretary to Father Moorby for 14 years, lauded his efforts at getting to know all his parishioners and making sure he was available to them: "He’s very understanding, easy to talk to."

She also noted his physical efforts, from pitching in with other volunteers to clean up from significant area flooding in 2006 and 2011 to sharing his gardening abilities.

"We’re worried about who’s going to take care of the flowers now," Salamida said with a laugh.

EDITOR’S NOTE: Father Thomas Valenti, who was ordained a Rochester diocesan priest in 1976 and most recently served for many years in the New York City area, has been named as Father Moorby’s replacement at Blessed Trinity/St. Patrick.