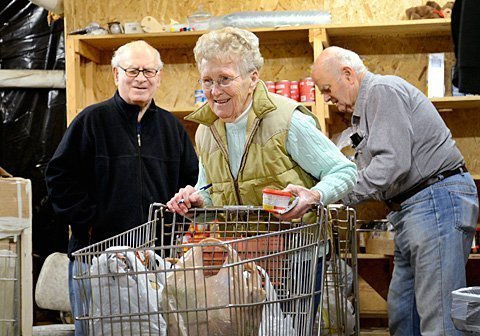 Volunteers (from left) Ralph Adams, Bernie Wilbur and Larry Rockwell prepare a cart of food for a client Feb. 28 at the St. Felix Community Food Cupboard in Clifton Springs.

When Marie Appleton began volunteering at the St. Felix Community Food Cupboard in the late 1980s, she didn’t realize she was embarking upon a second career of sorts, or that she would become a fixture at the cupboard.

That’s exactly what happened, however. After 25 years as a volunteer, Appleton retired from her "career" at the food cupboard in January.

"I just thought I’d been in it long enough," explained Appleton, 88. "I really would have liked to have still been there doing the things I’ve been doing all these years, but I just wasn’t able to do it anymore."

Appleton first began volunteering at the food cupboard shortly after retiring from her job as a head cashier at a grocery store. She was looking for something to fill her time when she learned that the food cupboard, located just a block from her home, was in need of volunteers.

"It was close to home and they were asking people to help. I wanted to help out," recalled Appleton, a longtime member of St. Felix Parish in Clifton Springs. Last year St. Felix joined with St. Francis Parish in Phelps and St. Dominic Parish in Shortsville to form the new St. Peter Parish.

Appleton’s first task as a volunteer was to sort through stacks of donated clothing. The food cupboard also takes in donated clothing and gives it to those in need at no charge. At the time there was quite a collection of clothing that hadn’t been sorted, so Appleton had her work cut out for her.

"That really took a lot of time because people brought clothes in every week. I did that for several years before I started working with the food itself. Then I’d stock the food shelves," she said.

Appleton’s husband, Paul, began volunteering at the St. Felix Community Food Cupboard a few years after she did, and over the years the couple was involved in many aspects of the cupboard’s operations. During their time with the food cupboard they helped people in need obtain food, clothing and even furniture, which the food cupboard collected and distributed for a few years.

"My husband and I helped to lug a lot of stuff," Appleton recalled.

Although health concerns prompted her husband to give up volunteering at the food cupboard several years ago, Appleton continued to serve as the cupboard’s treasurer until January. She took care of the food cupboard’s paperwork, made sure its bills were paid and let other volunteers know what kind of funds the cupboard could spend on food, said Rockwell, who orders food from Foodlink twice a month.

Appleton said she stayed with the food cupboard for so long because she enjoyed the work and recognized the need for such a ministry in her community.

"I guess I just saw the needs of the people, and I had time on my hands and I wanted to be doing something," she said.

The cupboard’s volunteers provide food for between 20 and 25 families a week, or approximately 80 to 100 families a month, Appleton said. Area residents who meet the cupboard’s residential and income requirements are allowed to get food once per month from the cupboard, which is open every Thursday between 11 a.m. and 1 p.m. Although it’s located in the basement of St. Felix Church on 12 Hibbard St. in Clifton Springs, the food cupboard is a community-based operation sponsored by all of the local churches, Rockwell said.

The cupboard is staffed by approximately 15 conscientious volunteers, he added. When people come to the cupboard for food, volunteers meet them in the front of the space to make sure they meet the requirements and find out how many children and adults are in each family. They then relay this information to volunteers working back amongst the shelves of food, Rockwell said.

"They’ll come back and say, ‘We’ve got a family of two adults and two kids,’ and we fill boxes accordingly," explained Rockwell, who has volunteered with the food cupboard for about 15 years.

Although the cupboard does receive biweekly deliveries from Foodlink, much of its food is donated by individuals, Boy Scout groups and churches. Most of the churches hold regular food collections, and some donate the proceeds from special events to the cupboard. This money is used to buy meat, which is expensive and rarely donated, and other staples such as pasta, cereal, fruits, vegetables and juice, said Rockwell, who belongs to St. John Episcopal Church in Clifton Springs.

Many individuals also donate clothing. There are no residential or income requirements for clothing, and those in need can pick up clothes as often as necessary, he added.

Tags: Faith in Action
Copyright © 2022 Catholic Courier, Inc. All rights reserved. Linking is encouraged, but republishing or redistributing, including by framing or similar means, without the publisher's prior written permission is prohibited.