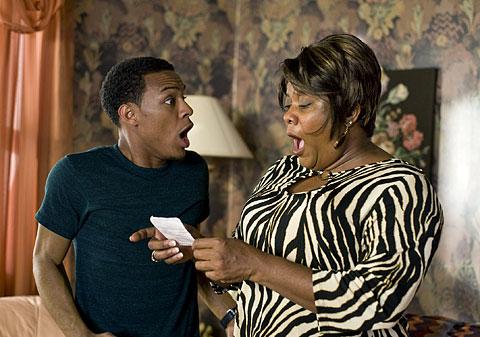 NEW YORK (CNS) — You can’t hit the jackpot every time you walk into the multiplex; moviegoing is always a bit of a gamble. That said, Catholic viewers will find the comedy "Lottery Ticket" (Warner Bros.) a riskier proposition than most because of permissive attitudes toward premarital sex and birth control and a plethora of harsh language.

Actually, the chances that a majority of audience members, regardless of religious affiliation, will consider this salutary entertainment are slim, if not as daunting as the 175 million-1 odds of winning the sweepstakes on which the story pivots. Efforts to convey a positive social message about giving back to the community are offset by banter and fisticuffs that sometimes border on the vulgar and are not especially original or humorous.

Set in an Atlanta housing project, the movie asks: What would you do if you won the lottery? How would those around you react?

After playing numbers Grandma has gleaned from Scripture, Kevin decides to give it a whirl himself using digits from a fortune cookie. Lo and behold, he wins $370 million. His best friend Benny (Brandon T. Jackson) hails him as the "Moses of the projects," but the celebration is premature. It’s Saturday, and the lottery office will not reopen until Tuesday morning. Surviving the weekend intact and in possession of the winning ticket won’t be easy.

Once Grandma spills the beans, everyone in the project wants a piece of Kevin. Lorenzo (Gbenga Akinnagbe) — a menacing thug fresh from prison — already has it in for him, and natty crime boss Sweet Tee (Keith David) forces Kevin to accept a $100,000 loan. Following his date with a gold-digging floozy, Kevin is also in danger of losing the respect of nice girl Stacie (Naturi Naughton). Fortunately, though, he has Mr. Washington (Ice Cube) — a reclusive former boxer for whom he runs errands — in his corner.

Taking a page out of Tyler Perry’s crowd-pleasing playbook, director Erik White and screenwriter Abdul Williams contrast the desire for upward economic mobility with fidelity to a faith tradition. But their attempt to bridge materialism and spiritual growth is an awkward one.

There are harmless jabs at religion, most notably during a visit to Grandma’s Baptist church where Reverend Taylor (Mike Epps) also has designs on Kevin’s windfall. Even at his most raucous and irreverent, Perry seems sincere about his faith. Here, by contrast, religion is just another comic foil. There are a few witty turns of phrase, yet we’re mostly confronted by caricatures. Those seeking an entertaining and perceptive social satire along the lines of 2002’s "Barbershop" will be disappointed.

Explicit dialogue regarding condom use during two thwarted sexual encounters is a further reminder we’re not dealing with an innocent night of bingo in the church basement.

The film contains nongraphic nonmarital sexual activity; much profanity; at least one use of the F-word; frequent crude and crass language; numerous sexual and contraception references; and some violence. The Catholic News Service classification is L — limited adult audience, films whose problematic content many adults would find troubling. The Motion Picture Association of America rating is PG-13 — parents strongly cautioned. Some material may be inappropriate for children under 13.