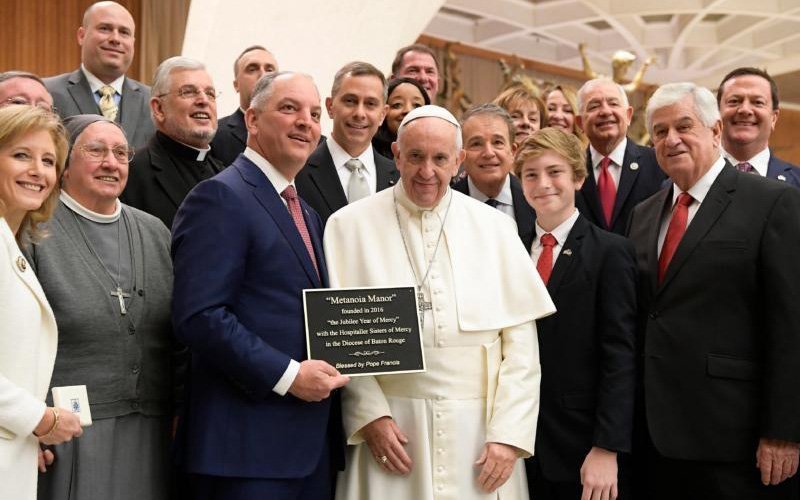 Pope Francis poses for a photo with Louisiana Gov. John Bel Edwards and his delegation during the pope's general audience at the Vatican Jan. 18, 2017. (CNS photo by L'Osservatore Romano)

BATON ROUGE, La. (CNS) — Louisiana’s Democratic Gov. John Bel Edwards, a Catholic, signed into law a measure that makes nearly all abortions illegal in the state once the fetal heartbeat is detected, which could be as early as six weeks.

“As I prepare to sign this bill,” Edwards said in a statement late May 30, “I call on the overwhelming bipartisan majority of legislators who voted for it to join me in continuing to build a better Louisiana that cares for the least among us and provides more opportunity for everyone.”

A day earlier, in 79-23 vote, the state House approved the so-called “heartbeat bill.” The state Senate overwhelmingly approved the bill May 6. It has no exceptions for rape or incest but would allow abortions only to prevent a pregnant woman’s death or in cases of “serious risk” to her health. It is expected to be almost immediately challenged in the courts.

“I know there are many who feel just as strongly as I do on abortion and disagree with me — and I respect their opinions,” Edwards said shortly after the bill was passed, but he added that his support for the pro-life bill was consistent with his overall approach to addressing poverty, immigration and many other social issues.

Edwards noted a variety issues he has acted on to protect and support life, including expanding access to health care “for working Louisianans,” which he did when he was first elected governor, and he said he also has worked with the Legislature to expand investment in education and reform the state’s criminal justice system.

He also pointed to more adoptions and foster care placements that have occurred during his administration, his efforts on behalf of protecting LGBT citizens from discrimination in the workplace, raising the minimum wage and supporting that women be paid the same as men “for doing the same job.”

Louisiana joins several other states with new laws severely restricting or banning nearly all abortions: Missouri, Alabama, Kentucky, Mississippi, Georgia and Ohio. None are in effect yet, either because they are being challenged in court or the date they take effect is weeks or months away.

In South Carolina, the state House of Representatives on April 23 passed a bill that could lead to a ban of nearly all abortions in that state. It moved to the Senate, where it was expected to face serious opposition, but the legislative session ended before that chamber could act on it.