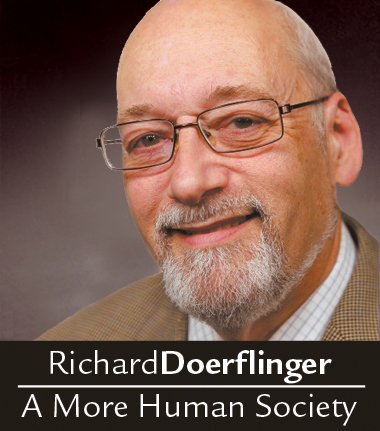 Catholics advancing social justice sometimes wonder: Will my efforts have a lasting impact? Am I building God’s kingdom or will all of this be wiped away?

The Second Vatican Council gave a profound answer: The kingdom is not ours to build directly, since "deformed by sin, the shape of this world will pass away." But we foreshadow that kingdom when we promote human dignity, freedom and community, and "charity and its fruits" will endure (Gaudium et Spes, No. 39). The key to lasting social change is love.

As Pope Francis has reminded us, another name for love is mercy. The saying "hate the sin but love the sinner," from a letter by St. Augustine, is at the core of how Jesus transformed sinners by loving them.

The council applied this principle to social conflict. Even when listing crimes that poison civilization, such as abortion, torture and genocide, it made the startling claim that these "do more harm to those who practice them than those who suffer from the injury" (Gaudium et Spes, No. 27). The innocent victims are received into God’s loving arms; the perpetrators risk their souls.

So we hate the sin because we care about the sinner. To reach those who are doing wrong, we must begin by loving them.

One bright light here was the recent March for Life in Washington, featuring messages like "Why not love them both?" Vice President Mike Pence declared to the crowd: "Let this movement be known for love, not anger … for compassion, not confrontation." Women considering abortion, he said, must be met "with generosity, not judgment."

The bishops of the United States have long understood this. The faith community most staunchly opposed to abortion leads the way in offering healing and reconciliation for those involved in abortion, through its Project Rachel ministry.

When former abortionist Bernard Nathanson became a Catholic many years ago, he said he was attracted to the church not because it says abortion is wrong — he had figured that out for himself as an atheist — but because it says there’s forgiveness for what he had done.

South Africans, after ending decades of apartheid, found that becoming one society required a plan for "truth and reconciliation" — acknowledging violent acts on all sides and the motives behind them, then granting amnesty so people could forgive each other and move forward.

Love and mercy are now in short supply in our country. After a divisive presidential campaign, the new president continued divisive and sometimes offensive rhetoric — provoking many Americans to take part in protests linked to the Women’s March on Washington.

Many protesters paid more attention to what they opposed than to what they were joining: A campaign whose website named abortion giant Planned Parenthood as its "exclusive premiere sponsor."

The campaign’s "unity principles" demanded support for publicly funded abortion on demand; pro-life feminist groups devoted to care and support for women were kicked out of the "women’s march."

While signs at this march declared that "love trumps hate," its national leaders exhibited more hate than love toward those who disagree.

On other issues too — immigration, religious freedom, national security — divisions have grown as words are used to attack and discredit, not communicate.

This presents a challenge and opportunity for Catholics. We can model an approach that begins with love and respect for everyone.

We should be first to hear people’s real worries and fears, cool tempers, correct exaggerations and build bridges for dialogue. Only then might we find ways to work together for the good of all.

Love and mercy in politics? It’s so crazy it just might work. I don’t know anything else that will.

Richard Doerflinger worked for 36 years in the Secretariat of Pro-Life Activities of the U.S. Conference of Catholic Bishops.