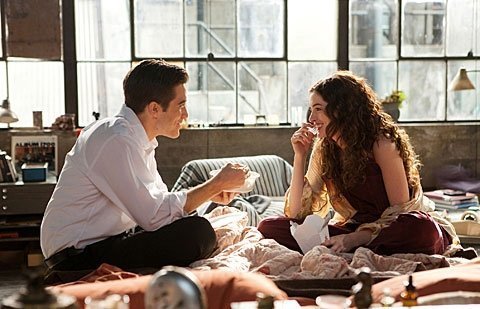 EMBARGOED. NOT to be published or broadcast until 10 p.m., all time zones, Tuesday, Nov. 23, Web postings included.

NEW YORK (CNS) — With a satire of the drug industry in the background and an excess of bare flesh to the fore, "Love & Other Drugs" (Fox) — a potentially touching romance about the ennobling effects of heartfelt ardor — goes thoroughly awry due to misguided values.

Smooth-talking womanizer Jamie and relationship-phobic Maggie — afflicted with early onset Parkinson’s disease, she’s afraid to become a burden to any potential partner — hook up for commitment-free sex. But gradually, despite themselves, they find their alley-cat connection deepening into love.

With Maggie recognizing qualities in self-doubting Jamie’s character that others around him fail to notice and with Jamie struggling to find the courage to offer Maggie a lifetime of support, the pair’s rise from hedonism has the makings of an engaging conversion story. Their initial high jinks, however, are not only intruded on in a needlessly graphic way, but also presented as perfectly acceptable, if not exactly ideal.

All of this reaches a queasy low point in a scene that plays for laughs the fact that Jamie’s brother Josh (Josh Gad) — who has moved in with Jamie after quarreling with his wife — has been pleasuring himself to one of Jamie and Maggie’s homemade sex tapes.