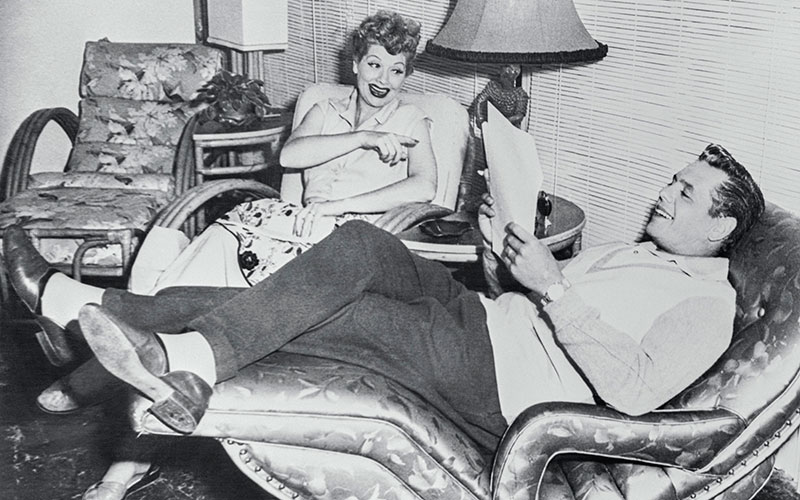 This is an image for the TV show "Lucy and Desi: A Home Movie" streaming on Amazon. (CNS photo by Bettmann Archive via EPK TV)

NEW YORK (CNS) — In the wake of writer-director Aaron Sorkin’s dramatization “Being the Ricardos,” comes a far different portrait of early television’s most iconic real-life couple, the warm and insightful documentary “Lucy and Desi.”

Directed by Amy Poehler and hosted by Lucie Arnaz Luckinbill, the film is streaming now on Amazon Prime.

Personal audio tapes and home movies supplement professional archival footage as Poehler chronicles the phases of Lucille Ball’s career from fashion model and starlet to beloved comedienne as well as Desi Arnaz’s rise from his first job, cleaning birdcages. By the time the two met and fell for each other, Arnaz was a successful bandleader.

Curiously, the Hollywood studio system seems never to have recognized Ball’s real potential, which may be part of the reason she and Arnaz were willing to enter the fledgling medium of TV. Another motivation was simply to be able to spend more time together than they had been with Arnaz constantly on tour.

As her fearless comedy won vast popularity for the pioneering sitcom “I Love Lucy,” which debuted in 1951, his skill as a producer also came to the fore. The result was Desilu Studios, the source of — among many others — “Star Trek,” “Mission: Impossible” and “The Untouchables.”

With so much visible success, why did it all fall apart for the couple behind the scenes, culminating in their 1960 divorce? “Lucy and Desi” goes a long way toward answering that question by revealing each spouse’s psychological makeup.

The trauma of Arnaz’s childhood in Cuba — where a revolution in 1933 ruined his once-wealthy and secure family overnight — is particularly intriguing. Ball underwent a similar upheaval when a hunting accident that paralyzed a neighbor’s child was blamed on the grandfather who raised her, with grave financial and social consequences for him and all those around him.

Further understanding of Ball’s character is provided by two of her proteges, Carol Burnett and Bette Midler. Mark Monroe’s script also explores the numerous ways in which “I Love Lucy” proved creatively innovative. These included its production team’s use of three cameras and film instead of kinescopes as well as the presence of a live audience.

A single slightly crass pun aside, “Lucy and Desi” is free of any objectionable content. While the show does touch on a few mature topics — such as Arnaz’s alcoholism and the racist distaste with which, it was feared, his and Lucy’s onscreen marriage might be viewed by audiences — teens as well as grown-ups should be well able to handle this material.

Ball and Arnaz remained friends even after their split, with Ball calling her ex-husband as he lay dying in 1986, two-and-a-half years before her own demise. Viewers will likely come away from Poehler’s compassionate double profile appreciative of its two subjects’ mutual affection and with a fresh or renewed regard for both.