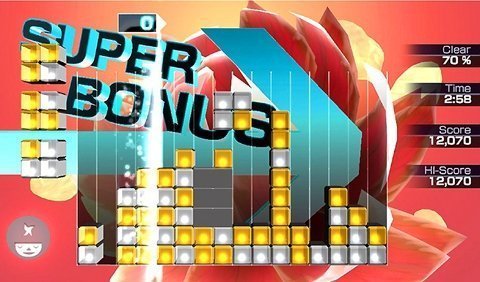 NEW YORK (CNS) — In 1989, a version of Soviet computer engineer Alexey Pajitnov’s classic puzzle "Tetris" was released for the Nintendo Game Boy. It became an unprecedented hit that defined a generation of video games and changed the industry forever.

Although the simple game, based on forming even lines from oddly shaped building blocks, was released on other systems both before and after, it was the uniquely portable version on Nintendo’s then-new handheld device that cemented its place in gaming lore, and in the hearts of millions of casual gamers.

Since then, there has been an endless line of similar brain teasers, each hoping to be the new "Tetris." Yet few have come close to capturing the accolade of worthy successor to Pajitnov’s gem.

One of the few puzzle series that can be regarded as a serious contender for this much-vaunted title is the "Lumines" franchise, of which "Lumines Electronic Symphony" (Ubisoft) is the latest installment. It’s an exclusive to the PlayStation Vita.

The original "Lumines" — first released in Japan in 2004 — has not been quite as commercially successful as the Soviet "Tetrimino" game, but has garnered vociferous praise and amassed an army of devotees.

As with all good puzzle games, the premise of "Lumines" is simple and easily stated: Create same-colored squares from the stream of multicolored blocks that fall from the top of the screen. As the player forms groups of these squares, they disappear; should the gamer fail to create enough, the area will soon become overfilled with blocks, and the round will end.

That’s it, in terms of the initial challenge, yet the game eventually offers a great deal more. As players progress, they discover a wide range of possible combinations and special abilities as well as various other tips and tricks.

What "Electronic Symphony" has going for it, essentially, is quality. The gameplay has that ineffable "just one more try" aspect to it that so many titles seek, while the vibrant graphics glow with charm. Even the soundtrack is no mere backdrop; it offers tracks from artists such as the Chemical Brothers, Faithless and the Pet Shop Boys.

Although its trendy styles and banging beats are clearly aimed at adults, "Lumines" contains absolutely nothing that would prevent parents from comfortably including the game in their children’s consoles. The often intense gameplay — and the fast mental activity it demands — may, however, make the game somewhat overwhelming for the very young.

Altogether, "Lumines Electronic Symphony" ranks as an extraordinary addition to the roster of contemporary puzzle games.

The Catholic News Service classification is A-I — general patronage. The Entertainment Software Ratings Board rating is E — Everyone.