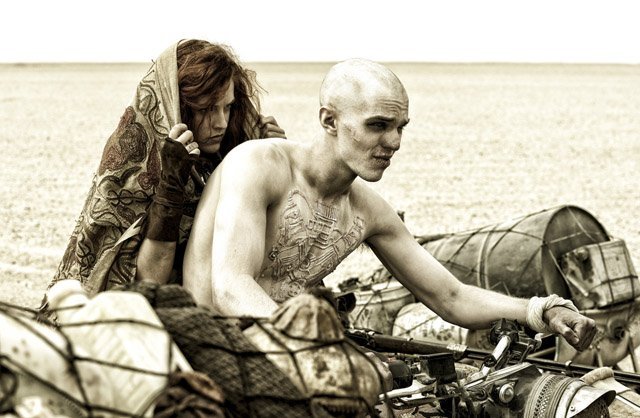 Riley Keough and Nicholas Hoult star in a scene from the movie "Mad Max: Fury Road." The Catholic News Service classification is L -- limited adult audience, films whose problematic content many adults would find troubling. The Motion Picture Association of America rating is R -- restricted. Under 17 requires accompanying parent or adult guardian.
By Joseph McAleer
Catholic News Service
NEW YORK (CNS) — A brutal assault on all the senses is the best way to describe "Mad Max: Fury Road" (Warner Bros).
Essentially a video game on steroids, with a minimalist script that could fit on a cocktail napkin, this film is a nonstop car chase through a bleak dystopian desert. Gratuitous, grisly violence; shocking, gross-out images; and an ear-splitting soundtrack pummels viewers into submission, if they haven’t already sought sanctuary at the exit door.
George Miller returns to direct, co-produce, and co-write this fourth installment of the series, which has been in limbo since 1985’s "Mad Max: Beyond Thunderdome." Tom Hardy steps into the role of "Mad" Max Rockatansky inhabited by Mel Gibson in the first three films.
A road warrior with a turbulent past, Max plows his solitary furrow, wandering aimlessly through the bleak landscape. Forty-five years have passed since the apocalypse, and civilization is a distant memory.
"As the world fell, each of us in our own way was broken," Max muses. "It was hard to know who was more crazy, me or everyone else. My world is reduced to a single instinct: survive."
Max is taken prisoner by a marauding gang loyal to Immortan Joe (Hugh Keays-Byrne), a tyrannical leader who controls two precious commodities, water and gasoline.
He also has a serious messianic complex. "I am your redeemer," Joe proclaims to the great mass of the unwashed. "It is by my hand that you will rise from the ashes of the world."
His army, the War Boys, gains strength from blood transfusions and breast milk (don’t ask). Max supplies the former, while Joe keeps a supply of birth mothers for the latter. The promise of their loyalty is ascension to a mythical place called Valhalla.
But all this pseudo-religious claptrap takes a back seat to the action, the real star of the film. Chief source of all the mayhem is Joe’s trusted driver, Imperator Furiosa (Charlize Theron). To the surprise of all, she goes rogue, hijacking a tractor-trailer and high-tailing it into the desert.
Furiosa seeks redemption for unnamed sins committed against her by Joe. But she also wants to liberate Joe’s harem of (of course) drop-dead gorgeous supermodels. The Wives (as they are collectively known) stow away in the belly of Furiosa’s beastly vehicle. One of them, The Splendid Angharad (Rosie Huntington-Whiteley), is great with Joe’s child.
Enraged, Joe assembles an armada, and the chase is on to stop Furiosa. Since Max is a supply of superior warrior blood, he is strapped to the vehicle driven by a crazed War Boy, Nux (Nicholas Hoult).
Eventually, Max escapes and joins forces with Furiosa and the Wives as they set out for a perceived sanctuary called "The Green Place."
The cinematography in "Mad Max: Fury Road" is, admittedly, stunning, and the action sequences are choreographed with skill. There’s a kernel of a message about freedom, redemption and the vanquishing of evil.
But these are small consolations for two hours of nonstop combat in which men have no qualms about beating women to a pulp — and vice versa.
It’s hard to believe that this ferocious film is by the same director who gave us animated dancing penguins in 2006’s "Happy Feet," and a charming talking pig in 1995’s "Babe."
The film contains relentless bloody violence, several disturbing images, and brief nudity. The Catholic News Service classification is L — limited adult audience, films whose problematic content many adults would find troubling. The Motion Picture Association of America rating is R — restricted. Under 17 requires accompanying parent or adult guardian.
Copyright © 2022 Catholic News Service, Inc. All rights reserved. Linking is encouraged, but republishing or redistributing, including by framing or similar means, without the publisher's prior written permission is prohibited.