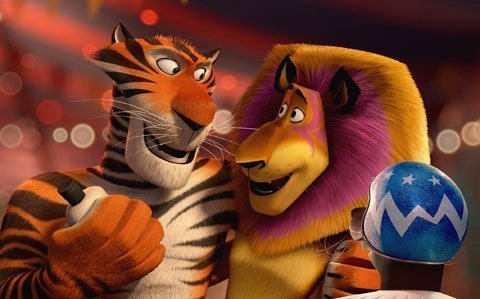 It’s one of dozens of "Bet you didn’t see that one coming!" moments, and all in good fun in this fast-moving, animated 3-D adventure, the third installment in the "Madagascar" franchise.

Explaining cartoon silliness not intended to give offense is the most tedious exercise possible, but since this one involves the Holy See, here goes:

King Julien, the lemur from the first two films (voiced by Sacha Baron Cohen), is besotted with Sonja, a performing circus bear. In a swift montage that goes from Rome to Vatican City, they have a private audience with the pope (It’s cartoon logic, remember) and while kissing the papal ring (all of the pope that’s seen), King Julien sucks it off the papal finger so he can buy his new love a fancy motorbike to replace her tricycle. Police descend on the motorcycle dealer to retrieve the ring, so the theft is quickly punished — although not King Julien.

So it’s more weird than funny, but so is the notion that a zebra can fly, and that happens, too. Laws of physics don’t apply here.

The plot picks up where the second film ended, with the four principal characters: Alex the lion, Marty the zebra, Melman the giraffe and Gloria the hippo (voices of Ben Stiller, Chris Rock, David Schwimmer and Jada Pinkett Smith, respectively) stranded in Madagascar by the mischievous penguins and chimpanzees, and trying to return to New York City and their home in the Central Park Zoo.

They swim (how else?) to Monaco to catch up with the penguins, chimps and their cache of jewels at a casino, and while escaping from French animal-control officer Chantel DuBois (voice of Frances McDormand), who only wants Alex’s head as a trophy, they stumble onto a decrepit European circus, which they then buy with the jewels so they can turn the circus around so it will tour in America.

At this point, the film takes on its moral footing, since the gang has to restore confidence to the animal performers, including Vitaly, a Russian tiger (voice of Bryan Cranston) who has lost his courage to dive through an ever-smaller set of rings. Co-directors Eric Darnell, Tom McGrath and Conrad Vernon, with a script co-written by Darnell and Noah Baumbach, fill their story with a rich vein of European circus lore, combined with an uplifting message about believing in one’s special abilities.

Young children will delight in the silly faces and fast-moving action, while the adults who take them will groan at dated references to the Spice Girls and "Driving Miss Daisy." Astute parents of perceptive older children may have to explain that Edith Piaf’s "Non, je ne regrette rien" ("No, I Have No Regrets") as sung by DuBois is not, in fact, the French national anthem, although it is hilariously presented that way.

The film contains intense action sequences. The Catholic News Service classification is A-I — general patronage. The Motion Picture Association of America rating is PG — parental guidance suggested. Some material may not be suitable for children.