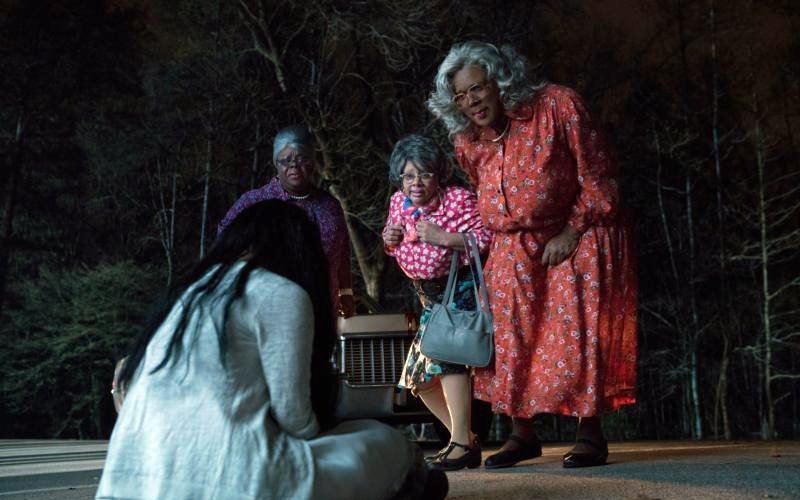 Cassi Davis and Tyler Perry star in a scene from the movie "Boo 2! A Madea Halloween." The Catholic News Service classification is A-III -- adults. The Motion Picture Association of America rating is PG-13 -- parents strongly cautioned. Some material may be inappropriate for children under 13. (CNS photo/Chip Bergmann, Lionsgate)

NEW YORK (CNS) — There’s a brief moment in “Tyler Perry’s Boo 2! A Madea Halloween” (Lionsgate) in which one desperately hopes that the plot has flickered to life.

On a dark road near an allegedly haunted campground, writer-director Perry’s long-running muumuu-draped moral force — played by Perry himself in drag, of course — encounters the Grim Reaper, complete with scythe. Finally, she either ponders her own mortality, or “conquers” death with a well-placed punch, right?

She only realizes that the blade is razor-sharp and there’s no head underneath the shroud, screams in fright and piles back into her somewhat-legendary Cadillac, where she’s been puttering around with Aunt Bam (Cassi Davis), pal Hattie (Patrice Lovely) and brother Joe (also Perry) in search of the campsite and her great-niece, Tiffany (Diamond White).

Perry’s Madea films of late have operated not on strongly limned original ideas but on the fumes of public goodwill at the memory of the character’s earlier outings. In those, she at least had some moral lesson to convey about the power of family ties or the importance of children obeying their elders.

This second Halloween adventure, by contrast, is entirely along the lines of a live-action Scooby-Doo cartoon. Madea eventually gets a sort-of comeuppance. But her primary task here is to shriek and toss off the occasional line about urinary incontinence.

Nerdy divorced dad Brian (Perry again) — Joe’s son — struggles to be a good father to Tiffany on her 18th birthday. But he has to compete with ex-wife Debrah (Taja V. Simpson) and her new boyfriend, Quinton (Andre Hall), who give the teen a new car as a present.

Tiffany uses the occasion to get herself invited to a fraternity’s Halloween party at the aforementioned campground — where more than a dozen people were murdered some years before. Madea, convinced that Brian is not a sufficiently strong-willed parent, decides to “rescue” Tiffany but is clearly not up to the task.

She and her companions encounter chainsaw-wielding yobbos and a character costumed as the girl in the well from the “Ring” horror franchise, pretty much just screeching and pointing in response. As a result, “Boo 2!” never even comes close to the level of a competently made horror comedy.

The film contains a brief scene of marijuana use, fleeting crude language and two instances of the N-word. The Catholic News Service classification is A-III — adults. The Motion Picture Association of America rating is PG-13 — parents strongly cautioned. Some material may be inappropriate for children under 13.