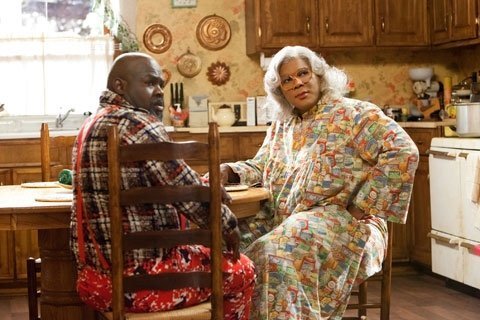 NEW YORK (CNS) — Tyler Perry’s broadly drawn morality plays, which include the stage version of "Madea’s Big Happy Family" (Lionsgate), have proven so surefire with their targeted audience as to be critic-proof.

In these earthy, over-the-top crowd-pleasers, insults fly, family problems are solved, children learn to defer to adults and short-tempered Madea (Perry in a muumuu) occasionally slaps wrongdoers — to wild audience cheers. But there’s a warm heart somewhere as well as a happy ending; the plays exist in a sentimental universe of their own.

In motion picture form, however, the flaws become more apparent, and they’re not above criticism — nor should they be.

The problem is not in the simple plot, in which Madea’s appealingly gentle niece Shirley (Loretta Devine) learns she has terminal cancer and tries to gather her three adult children — Tammy (Natalie Desselle Reid), Kimberly (Shannon Kane) and Byron (Shad "Bow Wow" Moss) — at her house to tell them the bad news.

The grown siblings, we discover, are all locked in dysfunctional relationships, sometimes with insolent children, while recently released ex-con Byron is also dabbling again in the drug dealing that landed him in jail.

The genuinely troublesome parts of this adaptation — which Perry both wrote and directed — consist of bug-eyed characterizations and comments that invoke not so much old racial stereotypes, as newly minted ones of Perry’s own creation. These begin with Madea’s pot-smoking sister Aunt Bam (Cassi Davis), who supposedly has co-matriarch status with Madea as a moral force, but spends the first half of the film in a literal haze.

There’s a particularly ugly comment, moreover, aimed by Madea at husband Joe (also Perry) when she refers to him as a "silverback."

Worthy messages about spouses respecting each other, children obeying adults and families learning to function as a unit while buffeted by the stresses of modern life get somewhat overshadowed by all this unsettling material.

Madea, to Tyler’s credit, is never as simplistic as the Atlanta milieu in which she’s placed. Although she has no particular religious precepts of her own — she explains that she knows God is angry at her — she fully expects her relatives to live up to the Christian faith they profess to have, and she manages to produce a few fractured Biblical quotations along the way.

Such an off-kilter but engaged approach to religion could yield some interesting results; it’s too bad they’re largely lost in a flurry of slaps upside the head.

The film contains marijuana use, some adult humor, fleeting crass language and slapstick violence. The Catholic News Service classification is A-III — adults. The Motion Picture Association of America rating is PG-13 — parents strongly cautioned. Some material may be inappropriate for children under 13.