Madeleine Albright is remembered as diplomat and teacher - Catholic Courier 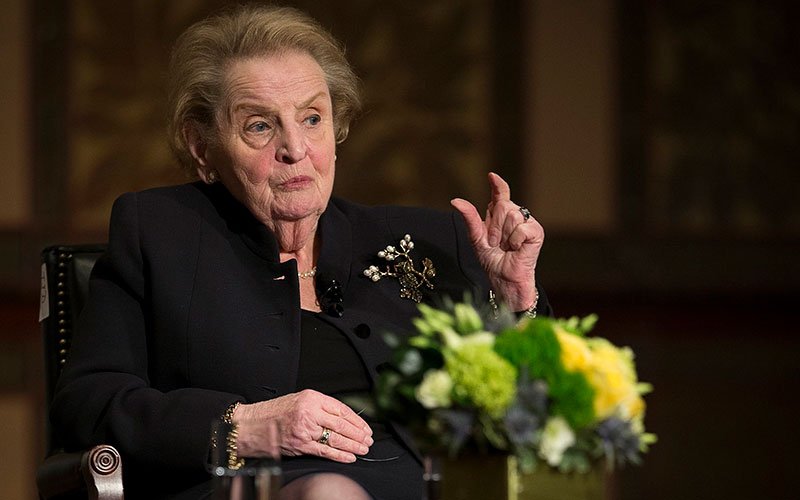 Former U.S. Secretary of State Madeleine Albright answers questions from Georgetown University students in Washington April 7, 2016, about the future challenges for religion, peace and world affairs. Albright, the first woman to serve as U.S. secretary of state, died March 23, 2022, from cancer, according to her family. She was 84. (CNS photo by Tyler Orsburn)

“We have lost a loving mother, grandmother, sister, aunt and friend,” her family said in a statement, adding that Albright died of cancer.

During her years as secretary of state, Albright frequently briefed Vatican diplomats on situations from the peace process efforts in the Middle East to tensions in Kosovo.

And in her nearly 40 years at Georgetown, she inspired students “not only to understand the world, but to serve the world. Generations of her students went on to do just that, a legacy that is almost incalculable in its reach,” said Joel Hellman, dean of the university’s Walsh School of Foreign Service.

“For all her accomplishments, Albright always said that first and foremost she was a professor. She began teaching at the School of Foreign Service in the fall of 1982, and from that moment on, she was a fixture on campus and in the lives of our students,” Hellman said.

He noted that despite her many commitments around the world, she rarely missed the class she taught on the foreign policy toolkit and always made time to meet all of her students — more than 2,000 throughout her career.

Born Marie Jana Korbel May 15, 1937, in Prague in what was then Czechoslovakia, Albright was the daughter of a diplomat, Joseph Korbel. Her family was Jewish and became Catholic when she was 5 as a protection from the Nazis, something her parents kept from the family.

Albright changed her name to Madeleine when she was in school in Switzerland. She and her family came to America in 1947 from Czechoslovakia.

Albright did not find out about her family’s religious roots until a Washington Post reporter uncovered it in a 1997 profile on her before she began her term as U.S. secretary of state in President Bill Clinton’s administration. At that time, she also learned that 26 family members, including three grandparents, had been killed in the Holocaust.

When she learned about her family, she told The New York Times: “I think my father and mother were the bravest people alive. They dealt with the most difficult decision anyone could make. I am incredibly grateful to them, and beyond measure.”

In 1959, she married Joseph Medill Patterson Albright. The couple, who divorced in 1983, had three daughters.

In a 2008, when she was honored by the Tanenbaum Center for Interreligious Understanding at the United Nations, Albright said: “As some of you may know, I was raised a Roman Catholic, became an Episcopalian upon marriage and discovered about 11 years ago that my family heritage is Jewish. So, if you ever hear me talking to myself — don’t worry, it’s just part of my quest for interreligious understanding.”

The area of religion and global policy was something Albright talked about and also wrote about. Her 2006 book, “The Mighty and the Almighty: Reflections on America, God, and World Affairs,” is one of her seven bestselling books.

During a lecture at Georgetown University, 10 years after that book came out, she joked that you really could write an entire book on the subject of religion and international relations.

She said this was not something she ever thought she would do, but it came from seeing religion not getting the place it deserved in policy discussions, especially with Americans, who “believe so deeply in the separation of church and state.”

She acknowledged that efforts to include religion in policy talks are important but need to be done carefully. She said a friend of hers compares it to brain surgery: “necessary to do, but disastrous if you slip up.”

Albright, who was awarded the Presidential Medal of Freedom in 2012 and spoke Czech, French, Polish, Serbo-Croatian and Russian, was clearly comfortable on the diplomatic stage but also in conversations with students.

She was the Michael and Virginia Mortara endowed distinguished professor in the practice of diplomacy at Georgetown’s School of Foreign Service and was a frequent winner of the school’s outstanding professor award.

“More than any other faculty member in our 100-year history, Madeleine Albright left her deep mark on the shape of our school. She lived the values we seek to instill. We are forever indebted to her, and we will miss her deeply,” said the school’s dean in a March 23 statement.

He added that Albright “combined a scholar’s appreciation for the arc of history, an immigrant’s recognition of the great promise of America, a woman’s understanding of what it means to shatter glass ceilings, and a seasoned diplomat’s ability to disarm her opponents with wit, charm and grace.”

Hellman, the dean, also noted the former professor and diplomat had “a war chest of ‘zingers’ for every occasion and a lifetime of stories to illustrate the complexities of security and diplomacy. Her deep knowledge of the underlying forces that shape international affairs remained relevant until the very last days of her life and she raised her voice only weeks ago to warn of the tragedy now before us in this brutal war on the European continent.”

That warning was Albright’s opinion piece for The New York Times published Feb. 23, the day before the Russian invasion of Ukraine.

“Should he invade, it will be a historic error,” she wrote.

“Instead of paving Russia’s path to greatness, invading Ukraine would ensure Mr. Putin’s infamy by leaving his country diplomatically isolated, economically crippled and strategically vulnerable in the face of a stronger, more united Western alliance,” she added.

Albright was not afraid to speak her mind and did so on social media where her Twitter handle was simply @madeleine.

On March 8, she tweeted: “From Kabul to Kyiv and beyond, women and girls are on the front lines in the struggle for freedom and human dignity. On this #InternationalWomensDay my heart is with all those fighting for a better, peaceful and more equal future.”

Fittingly then, current Secretary of State Antony Blinked tweeted this tribute to her March 23: “Albright was a brilliant diplomat, a visionary leader, a courageous trailblazer, a dedicated mentor, and a great and good person who loved the U.S. deeply and devoted her life to serving it. She loved @StateDept. And we loved her back. Madam Secretary, thank you.”

Albright is survived by her three daughters: Alice, Anne and Katie; her sister, Kathy Silva; her brother, John Korbel; and six grandchildren.