Magic in the Moonlight - Catholic Courier 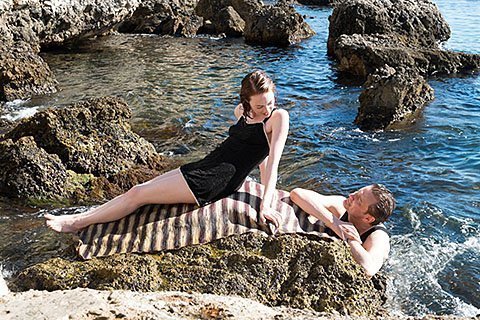 Emma Stone and Colin Firth star in a scene from the movie “Magic in the Moonlight.” Catholic News Service classification, A-III -- adults. Motion Picture Association of America rating, PG-13 -- parents strongly cautioned. Some material may be inappropriate for children under 13.

NEW YORK (CNS) — Within the enchanting French Riviera setting of "Magic in the Moonlight" (Sony Pictures Classics), an age-old debate simmers between faith and reason, between a strictly rationalist standpoint and openness to divine providence.

Writer-director Woody Allen has always preferred nihilism to optimism, and this, his 44th film, does not vary in outlook. It’s a pity, as his deeply cynical view toward matters spiritual sours what is otherwise a lovely travelogue with entertaining, if not particularly amusing, performances.

It’s the Roaring Twenties in Berlin, and Stanley (Colin Firth) is a master illusionist. Posing as Wei Ling Soo, a Chinese magician, he wows audiences by sawing women in half and making a live elephant disappear.

Behind the scenes, Stanley is a nasty misanthrope, described by his friend and fellow conjurer, Howard (Simon McBurney), as "a genius with all the charm of a typhus epidemic."

Stanley has a sideline: debunker of spiritualists, charlatans who claim to communicate with the dead, defrauding innocent people in the process.

To Stanley, the world is only understood through science and logic. Anything to do with God, faith, or the afterlife is, he claims, "all phony, from the seance table to the Vatican and beyond."

It’s no wonder he channels the German philosopher Friedrich Nietzsche in stating, "If we are to get through life, we must delude ourselves." That’s ironic, for a man who makes his living tricking audiences into believing anything is possible.

Howard persuades Stanley to accompany him to the south of France, where Grace (Jacki Weaver), a rich American widow, has become enchanted by her fellow countryman, comely clairvoyant Sophie (Emma Stone).

Arms flailing and shivering from "mental vibrations," the wide-eyed Sophie is a wonder to behold. After she "contacts" Grace’s dead husband, Grace is ready to hand over the family fortune, and her smitten son, Brice (Hamish Linklater), proposes marriage.

This is all too much for Brice’s sister, Caroline (Erica Leerhsen), and her psychiatrist husband, George (Jeremy Shamos). They bring in Howard and Stanley to expose Sophie as a trickster and fraud.

Predictably, Stanley’s eyes are opened and his hard heart is melted by Sophie’s charms and her rather convincing supernatural powers which, she insists, give hope to those who despair.

Mystified and lovesick, Stanley finds himself questioning his own narrow worldview, especially on matters of faith.

With his dearly loved Aunt Vanessa (Eileen Atkins) lying gravely ill in the hospital, Stanley turns to God — that "benevolent father figure out there" — for help.

"I don’t have all the answers," he prays. "It is possible that we are here by design, and you could be real."

It’s a startling turnaround for an atheist. But as this is a Woody Allen film, there are twists in store. Suffice it to say that believing moviegoers will soon realize they’ve been led down an attractive but dead-end garden path.

The film contains a cynical view of faith and religion, brief sexual humor and mature references. The Catholic News Service classification is A-III — adults. The Motion Picture Association of America rating is PG-13 — parents strongly cautioned. Some material may be inappropriate for children under 13.