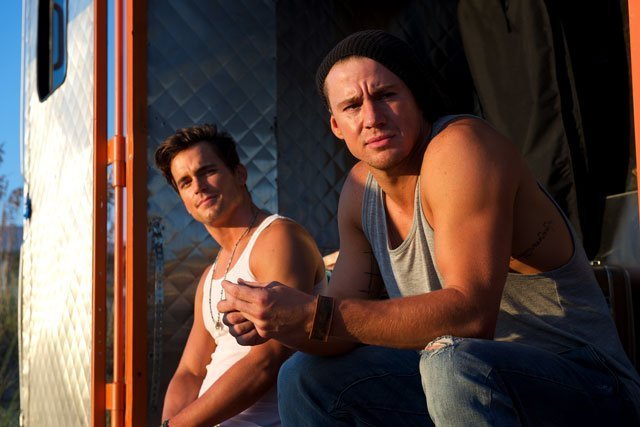 In fact, the shallower your thinking, the more at home you’re likely to feel, both with the characters and the content of this preposterous return to a subculture of smut.

Cobbling together a series of familiar tropes in lieu of a plot, director Gregory Jacobs gives us a buddy film by reuniting the bump-and-grind alchemist of the title (Channing Tatum) with several members of the trou-dropping group he once headlined. This is followed by a road movie as the mostly restored ensemble — Matthew McConaughey as the original’s club owner (and indecency impresario), Dallas, is a notable absentee — depart their Tampa, Florida, home base for an annual convention of clothes shedders in Myrtle Beach, South Carolina.

Once there, it’s time for a "you-can-do-it-if-you-try" final segment in which the retiring (but not shy) team rack their brains and work their garments off to achieve a memorable farewell performance. Along the way to this payoff, Jacobs pads out the boys’ lewd routines — one of which uses the trappings of a wedding ceremony to degrading effect — with vacuous reflections on the Zen of masculine burlesque.

Of course, even hearts hidden within layers of beefcake crave romance. So enter Mike’s love interest, aspiring photographer Zoe (Amber Heard). The two meet cute when he steps away from a nighttime beach party to relieve himself, and she ambles along and starts taking snaps of the process. Some enchanted evening.

No doubt anxious lest the lady-pleasing ways of Mike and his pals be mistaken for intolerance, screenwriter Reid Carolin has the boys stop off at a drag show, where they enthusiastically join in a campy stage prancing contest for members of the audience. When their portly non-stripper sidekick Tobias (Gabriel Iglesias) instantly shuts down all competitors by appearing in a Carmen Miranda outfit, complete with maracas, you know you’ve been entertained.

The film contains a debased view of human sexuality, including implicit approval of an off-screen casual encounter, brief but nasty irreverence, drug use, frequent scenes of publicly simulated sex acts, some of them aberrant, rear male nudity, a couple of uses of profanity and pervasive rough and crude language. The Catholic News Service classification is O — morally offensive. The Motion Picture Association of America rating is R — restricted. Under 17 requires accompanying parent or adult guardian.