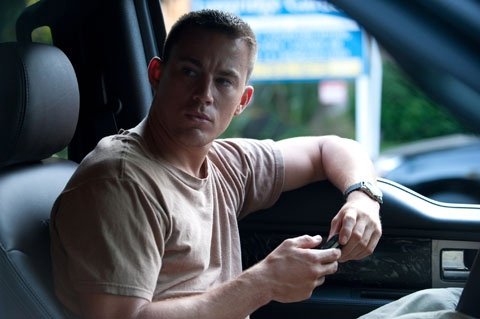 NEW YORK (CNS) — Just what is there about male strippers that makes it awfully difficult to take them seriously? That’s a question moviegoers misguided enough to attend a showing of the sordid drama "Magic Mike" (Warner Bros.) will have the better part of two hours to contemplate.

But, then again, perhaps they’ll have other things on their minds.

Though it follows a morally acceptable thematic path, director Steven Soderbergh’s somewhat random-feeling journey into the subculture of ladies-only clubs includes too many sleazy detours and too much flaunted flesh.

The latter element is on display almost the moment the opening credits end as we see the titular character, played by Channing Tatum, rise from the bed he was just sharing with two (yes, count ’em, two) women, neither of whom is wearing any more clothing than he is.

One of these damsels, the dialogue reveals, is a perfect stranger he met the night before and whose name he has now forgotten. Welcome to the world of veteran stripper Magic Mike.

By day, Mike toils as a construction worker and it’s while he’s tiling a roof that he meets and befriends directionless 19-year-old Adam (Alex Pettyfer). Mike becomes something of a mentor to the lad, and soon convinces Dallas (Matthew McConaughey), his boss at Club Xquisite — no eye-rolling, please — to give the newcomer a job.

Initially, this involves being a gofer for Mike and his G-stringed confreres. But fate intervenes, and a star is born.

Not only does Adam become a hit with the audience, he’s also drawn into the same hedonistic lifestyle of casual sex and recreational drugs that Mike has been pursuing.

Viewing these developments with well-founded concern is Adam’s straitlaced sister, Brooke (Cody Horn). So when Mike falls for Brooke, he’s faced with a dilemma: Will he grow up and stop dropping trou for cash or lose the girl of his dreams?

That’s a rather slender dramatic thread on which to hang so much beefcake.