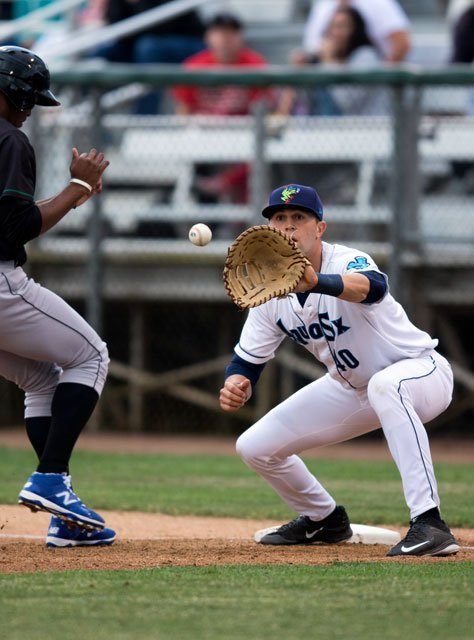 Ryan Uhl, a parishioner of Sacred Heart Parish, St. Marys, Pa., catches a ball during a game in late June. Uhl was picked in the 7th round of the Major League Baseball draft this summer. He's currently playing for the Seattle Mariners' minor league team, the Everett AquaSox.
By Mary Solberg
Catholic News Service
ST. MARYS, Pa. (CNS) — For those who love baseball, Berwind Park in the small Elk County community of St. Marys is a field of dreams.
In fact, it was at that ballpark this summer where Benedictine Father Eric Vogt made a prediction: Ryan Uhl, one of his young parishioners at Sacred Heart Parish in St. Marys would be drafted by a big league team.
Father Vogt walked onto the Berwind Park diamond where Uhl’s dad, Jeff, was working one day in early June. They talked about how several major league teams were scouting 22-year-old Ryan Uhl throughout his senior year at Indiana University of Pennsylvania, when he led NCAA Division II schools in home runs.
"I was saying how hard it is to get drafted, and Father Vogt said, ‘Uhlie’s going to make it. I believe that,’" Jeff Uhl recalls. "Just a few days later, the Seattle Mariners called him."
On June 9, Ryan Uhl was selected by the Mariners in the seventh round of the 2015 Major League Baseball draft of first-year players.
Standing at 6 feet 6 and weighing 230 pounds, Ryan Uhl began his professional career this summer playing rookie ball for the Everett AquaSox, the Seattle Mariners’ Class A short-season affiliate based in Everett, Wash.
"I watched Ryan grow up in Little League and throughout high school and at the parish," Father Vogt says. "He’s a nice kid, too."
As the head baseball coach at Elk County Catholic High School, Father Vogt recalls coming up against Ryan, who played for the cross-town rival, St. Marys Area High School.
"He hit fastballs out of sight," Father Vogt says. "I told my players, ‘Don’t let him beat us.’"
The younger Uhl recalls Father Vogt serving not only as his pastor but as an umpire at American Legion games during the summers.
"Father Eric was behind the plate and I would always talk to him. It was pretty cool," Ryan Uhl says.
For the young men in St. Marys who grew up seeing a Catholic priest give signals from the third-base line, faith is an integral part of the game of baseball. Even now that he’s eyeing the big leagues, Ryan Uhl remembers his roots and the importance of keeping prayer central to his favorite sport.
"After the national anthem is over, I ask God to help me play to the best of my abilities and watch over me and my teammates," he says. "My Catholic faith just gives me the mental attitude that I can do anything I put my mind to and God’s always there to help me."
This summer, Ryan attended a Sunday service with a Catholic priest who regularly visits the ballpark in Everett. It’s a vital timeout for players in the midst of an otherwise demanding schedule. The team practices and plays nearly every day, including Sundays, from noon to 11 p.m.
"There are other things away from baseball that are important, like church. The priest talks to you about your family and how to deal with all of the things going on in your life," Ryan Uhl says. "It’s difficult, but I pray every night and try to not take everything for granted."
It’s the same attitude that Father Vogt has tried to instill in his own players at Elk County Catholic. With 118 career coaching wins under his belt, he is excited to continue mentoring the Crusaders. He has led the team to four district championships, with the 2014 season being his best.
"Baseball gives you a little bit of heaven," Father Vogt, 64, says. "When you’re playing baseball, you don’t care about anything else at the moment."
Parents Marsha and Jeff Uhl are grateful for Father Vogt’s influence on the parish and sporting communities, especially among youth who sometimes need a spiritual boost on the playing fields. Not only is Father Vogt a head baseball coach, but he umpires for local softball games and for American Legion baseball.
"It’s great to have him as an umpire and as a pastor," Marsha Uhl says.
The Uhls have always talked openly about their Catholic faith at home with Ryan and his brother, Eric, 19.
"We talk about religion and faith and believing in God," Marsha Uhl says. "I think Ryan is very connected to his faith. He might not talk about it, but I think it’s growing in him."
The Uhls, like nearly everyone in St. Marys, have spent their lives praying for their favorite major league team, the Pittsburgh Pirates. But now that
Ryan Uhl is a Seattle Mariner, allegiances may have to change, even for Father Vogt.
"I’m sure hoping he’s going to be a Mariner fan for a while," Marsha Uhl says of her pastor.
Copyright © 2022 Catholic News Service, Inc. All rights reserved. Linking is encouraged, but republishing or redistributing, including by framing or similar means, without the publisher's prior written permission is prohibited.