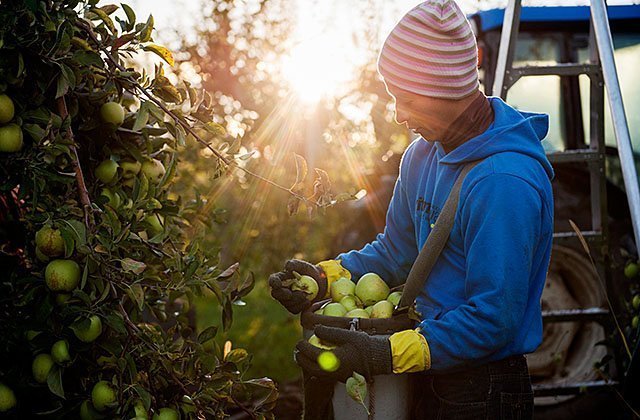 The sun rises behind Heberle Farms worker Raul Duran as he picks Golden Delicious apples Oct. 8 at a Brockport, N.Y., orchard owned by Martin Farms. Heberle Farms rents 50 acres of land in Brockport that yields 25,000 to 30,000 bushels of apples during a good season. Many of Heberle's apple pickers hail from the Mexican state of Michoacan and come to the U.S. on H-2A visas that allow them to do temporary agricultural work.

WASHINGTON (CNS) — Catholic leaders urged members of a Senate and House conference committee that began working on a compromise farm bill Nov. 6 to negotiate a measure "that reflects a commitment to the common good" and puts "poor and hungry people first."

"In the face of budget constraints, the 2013 farm bill is an opportunity to address broken and outdated agriculture policies," the group said. "We call on you to shape a farm bill that redirects help away from those who need it least to those who need it most."

A "just and fair" measure "will put poor and hungry people first, serve small and medium-sized family farms, promote sustainable stewardship of the land, and help vulnerable farmers and rural communities at home and abroad," they added.

The bill covers a five-year period. Versions passed by the House and the Senate would cut the Supplemental Nutrition Assistance Program, formerly known as food stamps, but the two chambers have major differences in their amounts of reduction.

On Nov. 1, all SNAP recipients received a cut in benefits, because a temporary boost to the program that was included in the 2009 Recovery Act came to an end.

"Agriculture policies must adequately respond to the needs of the most vulnerable and hungry people, and farmers and families at home and abroad," the Catholic leaders said.

The leaders urged lawmakers to "reject cuts and structural changes to SNAP that will harm vulnerable children, seniors, unemployed and underemployed people, and persons with disabilities."

Regarding international food aid, they said the U.S. should "maintain adequate funding for long-term development programs that help poor farmers grow more food." They urged support for $400 million provided to such programs, like Food for Peace, found in the House and for retaining the Senate bill’s "sensible reforms" to make food aid more efficient and able to reach more people with the same funding.

The Catholic leaders said conservation programs should be protected from further cuts. "Farmers and ranchers, like all of us, are called to use our natural resources responsibly for ourselves and future generations," they said.

The final farm bill, they added, also should strengthen rural development initiatives that help farmers as well as rural communities grow local economies through grants and loans that offer a sustainable path for development.

Their letters also cited Pope Francis’ message for World Food Day, in which the pope said, "It is a scandal that there is still hunger and malnutrition in the world," and called for "a just and lasting solution."