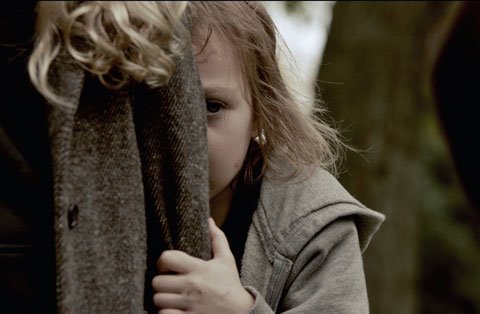 NEW YORK (CNS) — As thrillers go, "Mama" (Universal) is no more than competent. But director Andy Muschietti’s film — which he co-wrote with his sister, Barbara, and Neil Cross — can be commended for avoiding gore and for the pro-family conversion in outlook experienced by one of its main characters.

Expanding their 2008 Spanish-language short, whose title was the Castilian version of the eponymous endearment, the Muschiettis tell the story of young sisters Victoria (Megan Charpentier) and Lilly (Isabelle Nelisse).

After their parents die in violent circumstances — some details of which, though they happen early on, would constitute a spoiler — the girls spend years stranded in an isolated cabin in the woods. Eventually, though, searchers hired by their Uncle Lucas (Nikolaj Coster-Waldau) manage to track them down and rescue them.

Together with his live-in girlfriend Annabel (Jessica Chastain), the drummer in a rock band, artist Lucas becomes the siblings’ guardian and places them under the continued care of therapist Dr. Dreyfuss (Daniel Kash). (Dreyfuss was originally put on the case by the court determining the kids’ custody.)

Dreyfuss works to overcome the children’s feral ways, which include scrambling about on all fours and eating bugs and other nasty menu items. But disturbing events begin to suggest that the wraith-like figure of the title — who, so the little ones claim, looked after them in the wilderness — has followed them to civilization.

Predictably, the apparition’s back story involves both an asylum and an orphanage. The latter institution is run by a staff of nuns who, though they’re given scant screen time, are nonetheless portrayed in an endearing light.

If "Mama" has any thematic weight it derives from the transformation Annabel undergoes. Our first glimpse of her finds her offering a silent prayer of thanks in response to the negative outcome of an at-home pregnancy test. So only her devotion to Lucas drives her — despite considerable reluctance — to take on the role of parental stand-in to Victoria and Lilly. Yet, by the closing credits, she’s become a fiercely dedicated adoptive mother, fighting for the duo’s hearts as well as their survival.

Though this is hardly drama of the highest order, Annabel’s positive spiritual path does present a welcome contrast to the innumerable templates of family dysfunction to be found at the local multiplex.

The film contains occasional bloodless violence, cohabitation, a brief nongraphic bedroom scene, a few uses of profanity as well as at least one rough and a handful of crude and crass terms. The Catholic News Service classification is A-III — adults. The Motion Picture Association of America rating is PG-13 — parents strongly cautioned. Some material may be inappropriate for children under 13.