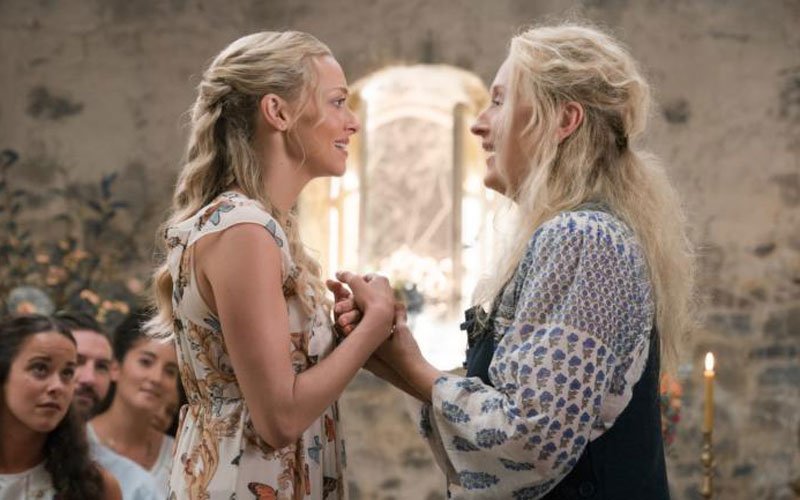 Amanda Seyfried and Meryl Streep star in a scene from the movie "Mamma Mia! Here We Go Again." (CNS photo by Universal)

NEW YORK (CNS) — The exuberant kitsch that was the trademark of the Swedish band Abba lives on in the musical romance “Mamma Mia: Here We Go Again” (Universal).

Like its predecessor, the 2008 adaptation of the Broadway hit “Mamma Mia,” the film, which serves as both a prequel and a sequel, is entirely designed to showcase the group’s songs. And it could be either celebrated or dismissed as no more than a bit of glitzy fun were it not for the fact that the sexual morals on display are as tacky as the score.

The action shuttles between the 1979 adventures of a youthful version (Lily James) of Donna, the much-mourned matriarch played by Meryl Streep in the original — and, briefly, here — and the present-day efforts of her daughter, Sophie (Amanda Seyfried), to open a hotel honoring Donna on the Greek isle she loved.

As it does so, we discover why Donna could never say for certain which of three men, Harry, Sam or Bill — in the disco era, Hugh Skinner, Jeremy Irvine and Josh Dylan respectively, nowadays, Colin Firth, Pierce Brosnan and Stellan Skarsgard — was Sophie’s dad. Oxford University grad Donna is portrayed as a free spirit (read trollop), while Sophie makes the best of a bad lot by introducing all and sundry to her three fathers.

Beyond the bedroom, the ensemble of characters, rounded out by, among others, Donna’s best friends and bandmates, Tanya (once Jessica Keenan Wynn, now Christine Baranski) and Rosie (in youth Alexa Davies, currently Julie Walters), behaves very nicely for the most part. Nor does Sophie imitate her mom’s wayward behavior.

A quarrel with Sky (Dominic Cooper) and anxiety over the hostelry’s grand opening provide what there is of a plot. Along the way, writer-director Ol Parker includes both a prayer-like opening number and a sequence leading up to an Orthodox baptism. As for the way he manages to work in the cringe-worthy classic “Fernando,” it’s worth the price of admission by itself.

But, although it’s referenced rather than portrayed, the blithe acceptance of the casual sex Donna engages in within hours of meeting each of her trio of suitors — one of them anxious to lose his virginity — is obviously not in keeping either with scriptural values or with human dignity.

The film contains benignly viewed promiscuity, a nonmarital bedroom scene, some sexual humor and a single profanity. The Catholic News Service classification is L — limited adult audience, films whose problematic content many adults would find troubling. The Motion Picture Association of America rating is PG-13 — parents strongly cautioned. Some material may be inappropriate for children under 13.