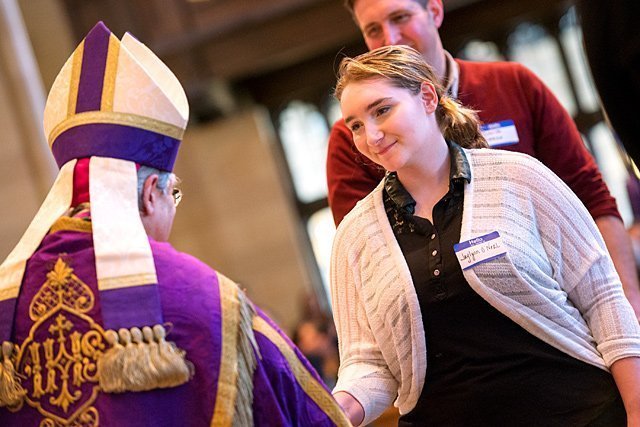 Catechumen Jaylynn O’Neal is greeted by Bishop Salvatore R. Matano after signing the Book of the Elect during the Rite of Election and Call to Continuing Conversion at Rochester’s Sacred Heart Cathedral March 5.

ROCHESTER — What draws people to the Rite of Christian Initiation of Adults?

Reasons can range far and wide and, according to Don Smith, all are valid.

“Every one of them gets down to a personal relationship with the church, with Jesus, with the community,” said Smith, who has served as diocesan coordinator of sacramental catechesis and family life since January 2017. “And you have 245 stories right here that are positive.”

That figure represents the number of people expected to receive sacraments of initiation into the Catholic Church during Easter Vigil liturgies across the Rochester Diocese April 15. Smith said diocesan parishes are preparing 149 candidates — people who were baptized in Catholic or recognized Protestant rites but never received first Eucharist and/or confirmation — as well as 96 catechumens who have never been baptized.
Candidates and catechumens, along with their sponsors, have been taking part in RCIA sessions in their parishes since last fall. More recently, they attended the diocesan Rite of Election for catechumens and the Call to Continuing Conversion for candidates. The combined services were held March 5 at Sacred Heart Cathedral and March 12 at St. Mary Our Mother Church in Horseheads. Bishop Salvatore R. Matano presided at both celebrations, which marked participants’ final stage of preparation before reception of the Easter sacraments.

Of the many ages represented in the RCIA process, young adults from Cornell University and Ithaca College form a sizable group this year. Included in the contingent of 10 candidates and four catechumens are foreign students from such countries as Ghana, South Korea, Colombia, Singapore and China.

Jesuit Father Gerry McKeon, RCIA coordinator for both schools’ Catholic communities, said that it’s good for the diocese to have such a high number of college-aged students wishing to join the church. He described their involvement as the result of “a very serious exploration” of their spiritual lives.

“It comes from within. It’s very much an adult decision,” said Father McKeon.

Oftentimes, he added, the process begins when people with no formal religious affiliation become attracted to the campuses’ Catholic communities.

“I think there’s a great need for ritual and worship, even if a person doesn’t have a faith,” Father McKeon observed. “Some people come to our church and feel they need to be in a worshiping community. There’s definitely a spiritual hunger.”

Such a hunger for the Catholic faith also has been experienced by Dexter Eaves, 18, who was initially exposed to Catholicism by a close friend and his family.

“They never pressed anything on me. They just said ,‘If you want to go, you can go (to Mass),’” recalled Eaves, a 2016 graduate of Midlakes High School in Phelps. “One day I decided to go, and it completely changed my life. It was the best thing I could have done at that time in my life.”

Eaves, a catechumen with St. Francis and St. Clare Roman Catholic Community, is looking forward to the Easter Vigil Mass at St. Mary Church in Waterloo, where he will be baptized and confirmed and receive first Communion.

Eaves said his RCIA experience is helping him rise past a childhood marked by poverty and family issues.

“I know I’m already accepted in the church, and now I’m going to be officially accepted,” said Eaves, who is currently beginning a career as an electrician. He plans to put his new faith into action by joining the Knights of Columbus and getting involved in parish life.

Eaves’ eagerness to engage with his Catholic community reflects what Smith calls a typically high level of passion and energy from those who have gone through RCIA. “They own their faith instead of just doing it,” he said.

Participants in the RCIA process often include people who are marrying Catholics and wish to share their faith; those whose parents weren’t regular church-goers; and converts coming from another faith or from no religion at all, Smith said.

He added that RCIA is available for people of all ages, saying the process “can be modified for anyone age 7 to 107.” Regardless of their circumstances, Smith said, “something has been sparked in them to want that deeper relationship with the church.”

The Cady family has had its RCIA participation shaped by a tragic event: Two years ago they endured the sudden death of Kennis, who was 12 at the time.

Speaking just before the March 5 Rite of Election and Call to Continuing Conversion, Dan Cady noted that his daughter’s passing was a sobering experience that “just turned our heads about life.”

He said his family was grateful for the support it received at the time of their loss from the staff of East Rochester’s St. Jerome Parish, with whom they became connected through a neighbor who belongs there. Shortly thereafter, he, his wife, Michaela, and sons, Aidan, 15, Solas, 12, and Merritt, 10, all became involved in RCIA.

The process has been a positive one thus far for Solas and Merritt, who flanked their dad in the cathedral’s front row March 5.

“Everything is fun all around,” Solas said of his preparation sessions.

“I like learning about it,” Merritt said of the Catholic faith.

As his family advances on its spiritual journey, Dan Cady said he’s confident that his daughter is watching over them.

“We would like to think it’s orchestrated by her,” he said.