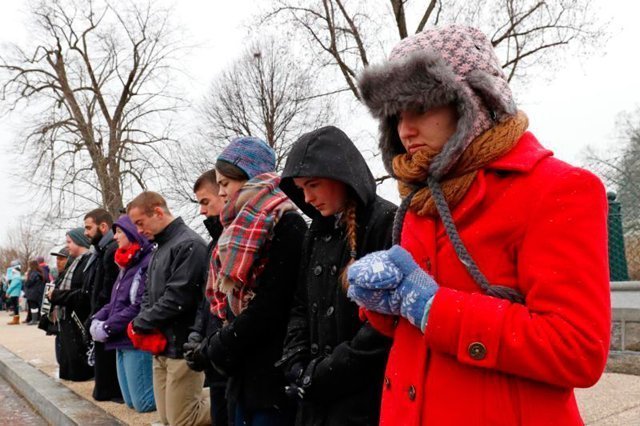 Pro-life advocates pray across from the Supreme Court building during the March for Life in Washington Jan. 22, the 43rd anniversary of the Supreme Court's Roe v. Wade decision legalizing abortion in the U.S.

WASHINGTON — Catholic admonitions about inclusion mixed with strong political language before the March of Life got underway Jan. 22 in Washington.

At a Jesuit-sponsored Mass for life at St. Aloysius Gonzaga Church that morning, Father Paddy Gilger’s homily reminded a small group of students that because Jesus made an effort to be inclusive when he chose his disciples, they, too, should be respectful of others’ opinions.

"As we join in the fight against the scourge of abortion, our differences remain, and that’s OK," he said.

Father Gilger also told the students to combine prayer and penance to create a culture of life. "Our efforts are to be able to create the same amount of space for people to change their hearts."

Later, at the March for Life rally at the Washington Monument, attended by nearly 50,000, Carly Fiorina, the former CEO of Hewlett-Packard who is running for the Republican presidential nomination, stuck to her standard political stump speech.

She drew loud cheers with her claim, "You can bet that I will win this fight against Hillary Clinton."

Fiorina reminded the audience that the next president "will have the awesome responsibility to pick up to four Supreme Court justices who will decide issues of life and religious liberty. … Make no mistake, ladies and gentleman, this election is a fight for the character of our nation."

Silent symbols of religious liberty, however, got a roar. A group of Little Sisters of the Poor who work at the order’s nursing home in Washington drew a sustained ovation when they were introduced.

The Denver-based order is fighting a mandate from the Department of Health and Human Services that requires employers, including most religious employers, to provide contraceptive coverage to its employees under the Affordable Health Care Act even if they have moral objections to doing so.

Their Supreme Court case, Zubik v. Burwell, will be heard in March. The order is facing $70 million in fines per year if it does not comply.

In her remarks, Fiorina also expressed her continued support for the series of videos released last summer by David Daleiden and the Center for Medical Progress that purport to show California representatives of Planned Parenthood discussing the sale of parts of aborted fetuses.

A lawsuit against Daleiden and the center over the videos has reached the 9th U.S. Circuit Court of Appeals, with the National Abortion Foundation and Planned Parenthood accusing him of misrepresenting his organization and illegally taping without permission, and aiding in violent threats against abortion clinics and the women who go there.

Planned Parenthood officials claim the videos were edited to manipulate the interviews and any mention of money for tissue and body parts is related to customary handling fees. But Daleiden and the Center for Medical Progress stand by its videos.

Patrick Kelly, the Knights of Columbus vice president for public policy, said opponents of the pro-life movement, "insist on dividing and bullying those who disagree with them by speaking of a fictional war on women. Our movement, the movement to protect human life, is different. It is built by you, the grass roots. … We come her to show that we cannot be intimidated."

Rep. Chris Smith, R-New Jersey, co-chairman of the Congressional Pro-Life Caucus, praised efforts by state legislatures. "The gains have been historic — 282 pro-life laws have been enacted since 2010 including laws to stop dismemberment abortions, require a 72-hour waiting period, and informed consent."

Smith, a Catholic, said the House override vote of President Barack Obama’s recent veto of a bill removing all federal funding from Planned Parenthood was scheduled for next week.

The rally was the evangelical community’s first formal involvement in the annual March for Life, which is held on the anniversary of the Supreme Court’s Roe v. Wade decision, which legalized abortion virtually on demand in the U.S.

"We are grateful for your leadership on the culture of life," said Jim Daly, president of Focus on the Family. "It’s taken us time to come to the party, but we are here with you!"

Daly also was headlining the first major pro-life conference for evangelicals to be held in conjunction with the March for Life. He was joined at the conference and the rally by Russell Moore, president of the Ethics and Religious Liberty Commission of the Southern Baptist Convention.

In the days leading up to the March for Life as forecasters announced the impending blizzard headed for Washington, organizers of the annual event said it would not be canceled.

Cancellations, however, plagued some would-be march participants from the Diocese of Rochester. Two of six bus groups — in Ithaca and Horseheads — were forced to stay home due to cancellations by their charter bus companies over weather concerns in Washington.

However, all four bus groups from Monroe County — leaving from Holy Spirit Parish in Webster, St. John of Rochester in Perinton and St. Pius Tenth in Chili as well as a youth contingent from Holy Apostles in Rochester — made it to the nation’s capital as planned.

Meanwhile, the groups from Ithaca and Horseheads made the best of their situations by hastily arranging their own localized Marches for Life. The first took place in Ithaca, beginning at 1 p.m. Friday, Jan. 22 — the exact time of the Washington March for Life. A gathering of more than 50 pro-life advocates conducted a prayer vigil and march near the Planned Parenthood building on West Seneca Street. Then, on Jan 23, nearly 25 members of the Horseheads group staged a vigil and march near the Planned Parenthood facility on East Church Street in Elmira.

"The world may think that we’re a little bit crazy to be here on a day like today, but those that are standing here know that there is no sacrifice too great to fight the human rights abuse of abortion," Monahan-Mancini told the crowd.

After the rally, participants marched up Constitution Avenue to the U.S. Supreme Court as snow began to fall — the beginning of what turned into a major blizzard and left more than 2 feet of snow in Washington, with outer suburbs receiving even more.

Among those headed to the court were Little Sisters of the Poor, wearing buttons that read: "Life, Liberty and Loving Service," and a reference to the government mandate: "We will have nun of it."

Over the years, pro-lifers participating in the March for Life have endured freezing rain, snow and sub-zero temperatures and there might have been more than one blizzard that swept through the nation’s capital on or around the Roe anniversary.

But 19 years ago, the circumstances Jan. 22 were a carbon copy of what marchers faced this year. CNS reported that a blinding snowstorm "whited out the view of the U.S. Capitol" and "sent federal employees home from work before noon."