March is small, but group's 'message of solidarity' with unborn strong as ever - Catholic Courier 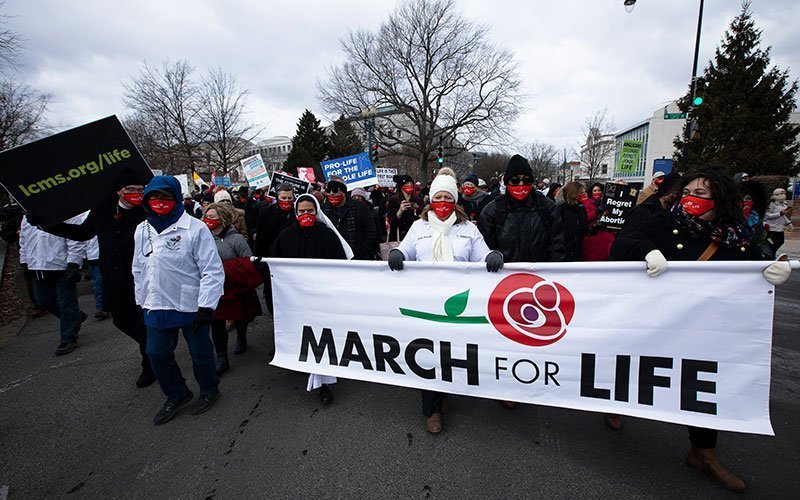 March for Life participants make their way to the U.S. Supreme Court building in Washington Jan. 29, 2021, amid the coronavirus pandemic. (CNS photo by Tyler Orsburn)

WASHINGTON (CNS) — It was the coldest national March for Life in some years, it was the smallest, and it also may be remembered as the bravest.

A little over 200 people, tightly flanked by members of the Knights of Columbus, endured subfreezing temperatures and wind as they sang hymns and trudged a zigzag route with Jeanne Mancini, president of the March for Life Education and Defense Fund, from the Museum of the Bible to the Supreme Court Jan. 29.

Mancini acknowledged “that we’re all symbolically marching, and we’re all in solidarity with each other.”

Before they stepped off, she told the marchers, originally a group of 60, that although this year was a deeply somber occasion, “let’s be prayerful” and to fulfill the event “in the best way we can.”

Others included former NFL player Benjamin Watson and Abby Johnson, the former Planned Parenthood clinic director who operates the pro-life ministry And Then There Were None.

The march, lasting about 90 minutes, was considerably quieter than the placard- and flag-filled processions of thousands up Constitution Avenue in previous years. And there were no counterprotesters.

Tim Saccoccia, a March for Life board member and a senior policy director for the Knights of Columbus, said the original group was joined halfway through the route by more than 100 others who seemed to be mostly from the Washington area.

There was a brief moment of concern, but the additional marchers turned out to be well-behaved. “They were very respectful,” Saccoccia told Catholic News Service in a phone interview from the march.

“We had a fantastic partnership with the D.C. police,” he added. “The Capitol Police also came out to help us.”

It was tough, even with a diminished event, “to stay socially distanced at times,” Saccoccia acknowledged. “Not everyone is a professional marcher.”

But the aftermath of the violent Jan. 6 insurrection — 5,000 National Guard troops are still protecting members of Congress, House and Senate office buildings and the fenced-off Capitol building — and fears of more unpredictable violence by random individuals increased the symbolism of the moment. It was the first street event in Washington since Jan. 6.

In a callback to a former March for Life tradition, Mancini and others in the core group carried single red roses, which, she announced, would “symbolize the profound grief pro-life Americans feel over the deaths of 62 million unborn children through legal abortion.” They laid those on the sidewalk behind the fenced-off Supreme Court building as marchers broke into the “Ava Maria” and “God Bless America.”

In its early years, the march had sent individual roses to every member of Congress.

The smallest previous march, during a 1987 snowstorm, was officially estimated at 10,000. The U.S. Park Police stopped issuing crowd counts after disputes arose over the size of the Million Man March in 1995, and the agency’s estimates were always considerably lower than that of march organizers.

Last year, with President Donald Trump speaking at the pre-march rally at the National Mall, well over 100,000 were believed to be in attendance. Future restrictions on Washington protest marches of any size will be the topic of debate in the coming months.

The first march was held Jan. 22, 1974, organized by Nellie Gray, a government lawyer, and the Knights of Columbus. The idea was to form a “circle of life” around the Capitol and Supreme Court. Mancini assumed leadership after Gray died in 2012.

This year’s theme was “Together Strong: Life Unites.”

Sacoccia pronounced the event a success. “We represented tens of millions of Americans who have suffered and lost their lives from abortion.”