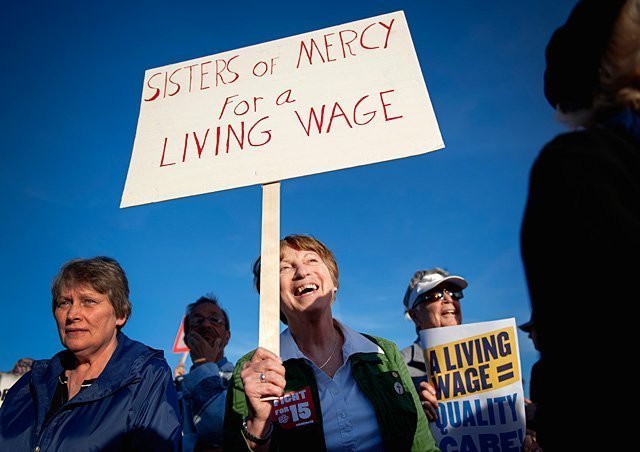 Sister of Mercy Janet Korn (center) takes part in a rally supporting an increase in the minimum wage April 15 at the University of Rochester.

ROCHESTER — Alexsandra Candelaria of Rochester wants to sleep through the night without worrying about how to keep the lights on and pay for her car so she can get her to her three minimum-wage jobs.

The 21-year-old Candelaria has to help support her family after her mother was permanently disabled in a car accident last year.

“I can’t make a living on $8.75 an hour,” she said, referring to New York’s minimum wage. She made the comment April 15 at the end of a 1.2-mile “Fight for $15” rally and march from the University of Rochester to College Town.

Raising the minimum wage to $15 an hour would make a huge difference in her life, said Candelaria, who works at a local McDonald’s as one of her jobs.

“I wouldn’t have to struggle and constantly worry about how I’m going to pay the bills,” she said.

Candelaria was one of 350 people who took part in the Fight for $15 event — which also called for better benefits and the right to unionize — that closed down parts of Elmwood and Mt. Hope avenues. It coincided with marches and rallies held across the country and across the world, according to http://fightfor15.org.

A few U.S. cities have adopted a $15 minimum wage, including Seattle and Los Angeles, while New York Gov. Andrew Cuomo has proposed raising the minimum wage to $11.50 in New York City and $10.50 for the rest of the state, according to news reports. New York’s minimum wage is set to increase to $9 per hour next year, according to information at www.labor.ny.gov/workerprotection/laborstandards/workprot/minwage.shtm.

The national Fight for $15 movement focused specifically on fast-food workers, with the local march ending in front of the McDonald’s on Mt. Hope Avenue. Many marchers held signs and banners and shouted, “We want our wages supersized.” Organizers also strung up a papier-mache Ronald McDonald, and marchers chanted “break the clown” and “these poverty wages have got to go” as they beat the papier-mache until it broke in half and released fake money onto the street.

The Mt. Hope McDonald’s, which is part of a local franchise, closed its doors during the march. Colin O’Malley, organizing director for Metro Justice, said that in order to “shut us up,” McDonald’s Corp. recently announced a raise for its workers of $1 per hour above minimum wage, which is different in each state.

Along with Metro Justice, UR student groups, several local union chapters and members of Rochester ACTS (Alliance of Communities Transforming Society) also took part in the local rally and march. Organizers said the event was held on Tax Day for Americans to highlight the tax breaks corporations receive while their workers do not receive a fair wage.

We join our efforts together and let the world know people need to be paid living wages,” said Sister of Mercy Janet Korn. “So often, (people) say that at McDonald’s and fast-food places, it’s just kids who are working. But that’s not necessarily true. There are people who have children working and have to keep their family together. So, they need a living wage.”

The need to respect our laborers and bring awareness to the wider community of their need for fair wages is part of Rochester ACTS’ mission, as well as part of Catholic social teaching, added Father Kevin McKenna, rector of Sacred Heart Cathedral. With the Cathedral Community located in the midst of an impoverished neighborhood, the church must be part of advocacy that helps improve the economic situation of the families in that area as well as its own workers, he noted.

“An important part of that work is (supporting) the minimum wage, a living wage so people can survive,” Father McKenna said.

The federal minimum wage is $7.25 per hour. A full-time worker who is the sole provider for a family of four would earn $15,080 annually, which is 65 percent of the federal poverty guideline, according to information at http://poverty.ucdavis.edu.

AJ Jarrett of Rochester said he can’t afford to live on such “poverty wages.”

The Miami native moved here to work at a local Burger King two years ago because he was offered better benefits. But better pay hasn’t materialized, said Jarrett, 25.

“We need better rights,” he said. “I can’t pay my bills. And I’ve had to borrow money from relatives and friends.”

Jonathan L√≥pez of Rochester said President Franklin D. Roosevelt created the minimum wage to ensure workers would not be paid below that minimum, but it doesn’t have to be the set wage. The minimum wage was part of the Fair Labor Standards Act of 1938, which Roosevelt signed into law as 25 cents an hour, according to www.dol.gov/dol/aboutdol/history/flsa1938.htm.

L√≥pez marched with his mother, Maria Polo of Colombia, who said her son works at night at the University of Rochester Medical Center and attends Monroe Community College studying to be a medical technician.

Of the 10 jobs slated for the biggest growth in the near future, such as customer service, six pay less than $10 an hour, said Jim Bertolone, president of the Rochester-Genesee Valley Labor Federation. Before union busting began among large corporations, many workers lived a comfortable, middle-class lifestyle, he said. Now, 42 percent of workers in the United States earn less than $15 an hour, Bertolone noted, and the percentage is higher among women, African-Americans and Latinos.

“This is society’s problem,” he said. “We need to keep marching until every worker in America has economic justice.”