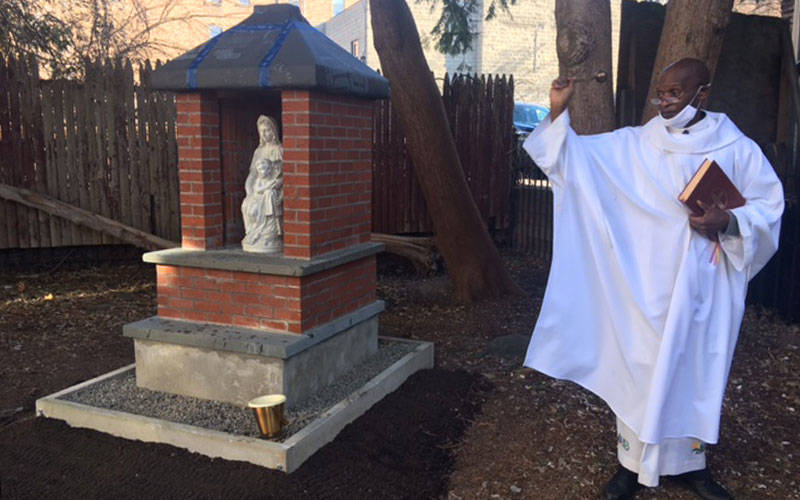 Last Dec. 8, Ithaca’s Immaculate Conception Parish noted its feast day in a special way — one that has set the tone for Marian devotional opportunities all year long.

What was once an overgrown corner of the garden behind Immaculate Conception’s parish center at 113 N. Geneva St. has been converted into what’s now called the Mary Shrine. Father Augustine Chumo, pastor, blessed the shrine on the Feast of the Immaculate Conception, and it has grown in popularity during the ensuing months — especially recently, he said.

“We have so many people stopping by when the weather is good,” Father Chumo told the Catholic Courier. “It is a growing devotion and that is good.”

Father Chumo said he’d raised the idea of creating a shrine in order to increase Marian devotion while also sprucing up the area where the shrine is located, which, he remarked, had become “like a junkyard.” He lauded the handful of parish volunteers who took it upon themselves to do the landscaping and secure a statue of Mary as well.

Father Chumo noted that many individuals regularly stop to pray at the Mary Shrine, often reciting the rosary there before entering Immaculate Conception Church for Mass. He added that the shrine can be accessed at any time, by both parishioners and non-parishioners.

The pastor encouraged use of the shrine by families and other groups of worshipers, provided that they maintain proper social distancing in light of the ongoing coronavirus pandemic. For instance, he noted, the parish’s young-adult ministry is planning to meet at the shrine on May 15 at 11:30 a.m. to pray the rosary before getting lunch and then performing community service.

Father Chumo remarked that the Mary Shrine is a natural fit for Immaculate Conception Parish, noting that the Ithaca church maintains a “very strong” focus on Marian activities — especially during the month of May, when the Catholic Church emphasizes Marian prayer.

“Hopefully, these special devotions will bring us closer to Jesus and help us reach out to other people,” he said.