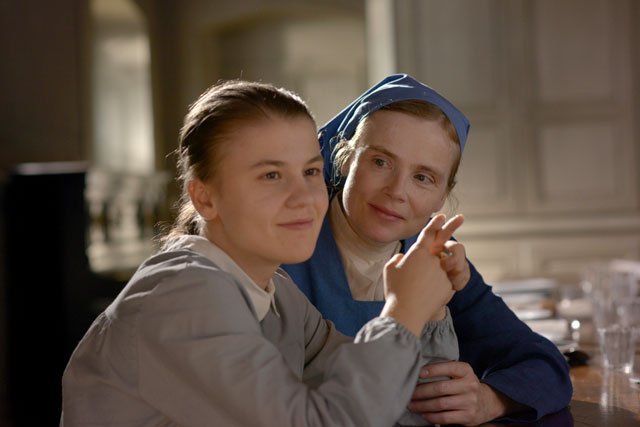 Ariana Rivoire and Isabell Carre star in a scene from the movie "Marie's Story." The Catholic News Service classification is A-II -- adults and adolescents. The film is not rated by the Motion Picture Association of America.

NEW YORK (CNS) — "Everything has its wonders, even darkness and silence." So wrote Helen Keller (1880-1968), the deaf-blind activist portrayed in the 1962 movie "The Miracle Worker."

Keller’s depth of perception and zestful attitude — despite all obstacles — are shared by "Marie’s Story" (Film Movement), a fictionalized profile of Marie Heurtin (1885-1921), often called the "French Helen Keller."

This joyous film stands out among cinematic offerings with not one but two important messages: a demand to respect human life at all stages, and a positive portrayal of women religious.

Born deaf and blind and wholly unable to connect to the world around her, by the age of 14, Marie — played by deaf actress Ariana Rivoire — is a feral creature, prone to wild outbursts.

With nowhere else to turn, her exasperated parents (Gilles Treton and Laure Duthilleul) bring Marie to the Larnay Institute, where an order of sisters runs a school for deaf girls.

The mother superior (Brigitte Catillon) rejects Marie’s application, as the school has never taught a child who is blind as well as deaf. "How would we communicate with her?" she asks.

Marie returns home, but not before making a big impression on one idealistic nun, Sister Marguerite (Isabelle Carre).

"Today I met an imprisoned soul, tiny and quite fragile, that I saw shining brightly through her prison bars," Sister Marguerite writes in her journal. "The girl is locked in a world of darkness and silence. How can we talk to her?"

With all the spunk of Maria in "The Sound of Music," Sister Marguerite lobbies the mother superior to give Marie a chance.

What ensues is a master class in unconditional love, patience and perseverance, as teacher and student start to break down the walls of isolation. It’s a slow and frequently violent process that is at times painful to watch, but that nonetheless makes suitable — and impressive — viewing for teens and adults.

Director Jean-Pierre Ameris brings a rare sensitivity and poignancy to his inspirational story. The magnificent setting of the French countryside in full bloom, moreover, complements the tale nicely. The profoundly life-affirming results are not to be missed.

The film contains some potentially disturbing scenes of a frightened child. The Catholic News Service classification is A-II — adults and adolescents. Not rated by the Motion Picture Association of America.