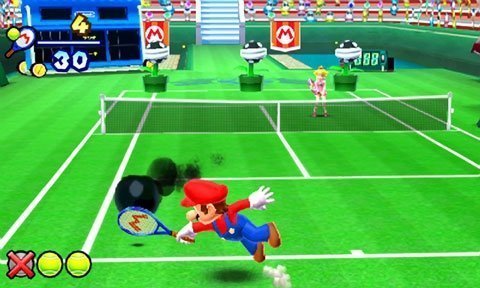 NEW YORK (CNS) — If there’s one video-game character who knows how to fraternize with — if not necessarily love — his enemies, it would surely have to be Nintendo’s ubiquitous mascot, Mario.

In the main series of platforming games for which he has become famous, the plucky plumber struggles to rescue his beloved Princess from the clutches of his green-scaled dragon nemesis, Bowser — and from Bowser’s minions in the Mushroom Kingdom. Having fulfilled this quest on numerous occasions, it would seem only natural for Mario to shun his defeated adversaries.

Such hard feelings, however, would not suit the interests of his human developers, who know only too well how profitable any game featuring their diminutive hero has the potential to be. And so Mario has put rancor aside to compete with his erstwhile opponents in such harmless pastimes as go-karting, golf, baseball and tennis.

This isn’t the first time the mustachioed Italiano character has found himself near the net; he’s acted as either player or umpire on a number of occasions since the 1985 release of the Nintendo Entertainment System title, "Tennis." Here, he once again swings his racket with the best of them, facing not only Bowser and his nefarious ilk, but such familiar allies as Toad, Luigi and Princess Peach as well.

Though the gameplay breaks little new ground, it does provide a glittering — and surprisingly addictive — homage to the original sport of kings. Devoid of objectionable content and suitable for all, it also features the usual Nintendo flourishes that gamers have come to expect.

Unlike some of its predecessors, "Mario Tennis Open" is not for the purist. Instead it brings a whole host of unlockable characters — as well as a variety of power-ups and upgradeable outfits that can be used to increase the player’s abilities — to the court.

One source of disappointment is the integration of the 3DS’s gyroscopic controls; these can feel unsatisfying and gimmicky. However, the 3-D implementation is solid, and the wide range of tournaments and minigames into which the player can enter means good value for money.

Though marred by a few shortcomings, this is, at heart, a simple game that nonetheless provides a surprising amount of depth and that can easily — and appropriately — be enjoyed by players of every age.