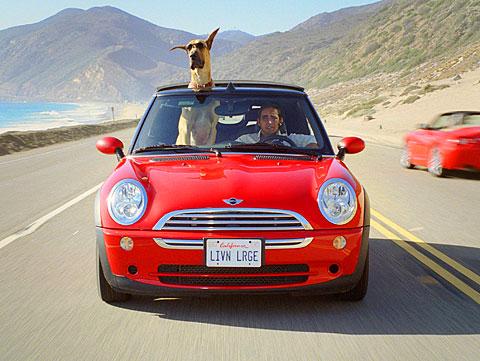 NEW YORK (CNS) — Young children might like "Marmaduke" (Fox), a comedy based on the adventures of the titular comic-strip Great Dane. Adults, on the other hand, are likely to find it about as charming as a bucket of doggie drool.

Director Tom Dey and screenwriters Tim Rasmussen and Vince Di Meglio unload a slapstick-laden story with Marmaduke (voiced by Owen Wilson) as a gangly adolescent attempting to fit in with canine cliques at a dog park that represents high school. A parallel plot has his human family, the Winslows, making the same transformation after they move from Kansas to Southern California where the father (Lee Pace) takes a marketing job for a pet-food company.

Most of the humor derives from the shopworn "he fall down, go boom" formula, as Marmaduke, with wisecracking cat sidekick Carlos (voice of George Lopez), navigates the shoals of high school stereotypes: the tough-talking Bosco (voice of Kiefer Sutherland), the pedigreed collie princess Jezebel (voice of Stacy Ferguson), and the funky gal mutt Mazie (voice of Emma Stone) who’s just right for him if he’d only notice.

At the same time, Dad Winslow is adjusting to his quirky boss Don Twombly (William H. Macy), who is desperately trying to sign a national distributor for his organic pet food.

Since there are only so many ways that dogs can run around, fight and tear up furniture, Dey has their computer-animated mouths do a lot of talking. And, oh, do they chatter away. When they’re not complaining or bullying, much of their dialogue consists of stale riffs on lines from other films.

The one brief evocative moment comes when the animals are mercifully silent. Marmaduke, beset by considerable troubles of his own making, runs away on a stormy night. On a lonely street, on a store window TV, he sees the Disney classic "Old Yeller." That tale has impeccable production values, sincere performances and a nontalking dog that has made audiences burst into loving, cathartic sobs for generations. Too bad these filmmakers couldn’t take that as their inspiration.

The film contains some mild scatological humor. The Catholic News Service classification is A-I — general patronage. The Motion Picture Association of America rating is PG — parental guidance suggested. Some material may not be suitable for children.