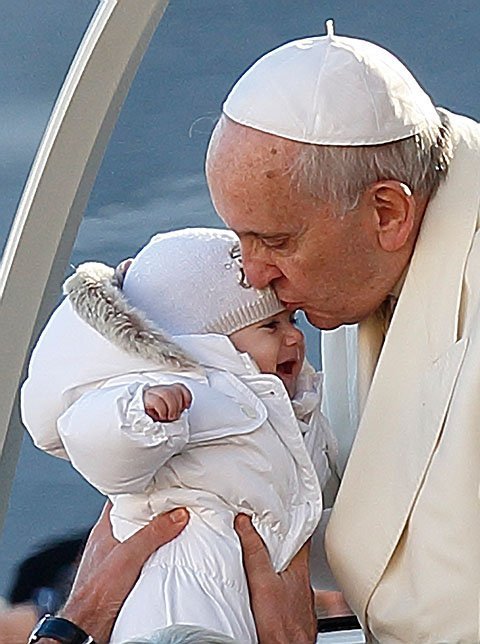 Pope Francis kisses a baby during his general audience in St. Peter's Square at the Vatican Dec. 10.

VATICAN CITY (CNS) — With the strength of the grace that comes from the sacrament of marriage, Catholic families are called to proclaim God’s love to the world, Pope Francis said.

God’s love gives birth to the family, and that love must be "the center of all its human and spiritual dynamism," the pope wrote in a letter Dec. 9 to Archbishop Vincenzo Paglia, president of the Pontifical Council for the Family, which will sponsor the Sept. 22-27 World Meeting of Families in Philadelphia next year.

Repeating his promise to attend the gathering in Philadelphia, Pope Francis thanked the Archdiocese of Philadelphia for generously committing itself to organize and host the event as a "service to the universal church and to families on every continent."

The October extraordinary Synod of Bishops on the family, and the general assembly of bishops scheduled to meet in 2015, are attempting to identify the most urgent needs of families today and to devise pastoral responses to them, he said.

However, the pope wrote, "the values and virtues of the family, its essential truths, are points of strength on which to build the nuclear family and are not up for discussion."

The Vatican released the text of the pope’s letter Dec. 10, shortly after he spoke about the synod at his weekly general audience. He told people gathered in St. Peter’s Square that no one at the extraordinary synod "called into question the fundamental truths about the sacrament of marriage: its indissolubility, unity, fidelity and openness to life."

Preparing for the World Meeting of Families in September and for the general Synod of Bishops on the family a few weeks later, he said, the church is seeking ways "to proclaim the Gospel of marriage and the family" in a way that responds to "the social and cultural contexts in which we live."

"The challenges of these contexts stimulate us to enlarge the spaces of faithful love open to life, to communion, mercy and solidarity," the pope said. Catholic couples, priests and parish communities must "let themselves be guided by the word of God, which is the foundation for the holy construction of the family as a domestic church and of the family of God."